2024: Pocahontas, Buicks and Cookies: Michelle’s route to the White House 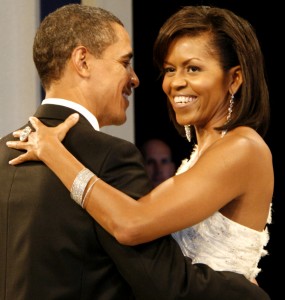 By dbking (originally posted to Flickr as _MG_0727) via Wikimedia Commons

Michelle Obama’s recent fiery speech in support of Hillary Clinton, or rather berating Donald Trump over multiple allegations of sexual assault, represents something of a break for first ladies. While many first ladies have had formidable intellects and acted as informal advisers to their presidential spouses, not least Hillary herself, the role has been largely apolitical, engaging in uncontroversial campaigns, for example for literacy. There have been some exceptions. Martha Washington was not keen on her husband’s political career, and second first lady Abigail Adams acted as a political confidante to her husband; third president Thomas Jefferson’s altogether more complex domestic arrangements after the death of his wife in 1782 are perhaps a subject for another time.

Jumping forward to the 20th century, Woodrow Wilson was widowed in 1914, two years after he entered the White House, but rather controversially and somewhat scandalously, remarried the following year to Edith Bolling Galt, who had been widowed in 1908. Rumours circulated, for example, that the two had conspired to murder Wilson’s first wife Ellen (just in case anyone thinks ludicrous, unsubstantiated allegations are a modern phenomenon).

Bolling Galt’s ancestors were a veritable who’s who of American history, including Pocahontas, Martha Washington, Robert E. Lee and Thomas Jefferson. When Wilson suffered a massive stroke in 1919 the extent of the seriousness of his condition was hidden from the American people. Claims, however, that Edith effectively ran the country in his stead are overstated and she later stressed that she merely decided, on the advice of doctors, what matters should and should not be brought to her husband’s attention.

The first modern first lady, indeed the only modern first lady, was Eleanor Roosevelt (ER), who was also the longest serving, by dint of her husband’s four election victories between 1932 and 1944. Eleanor Roosevelt showed little interest in politics in the early part of her husband’s career, when he served as a state representative in New York, in Woodrow Wilson’s cabinet in WWI and ran as the Democratic vice-presidential candidate in 1920. He was struck by polio in the early 1920s, and would never walk unaided again, but was elected governor of New York in 1928.

After reaching the White House, ER very much acted as his eyes and ears around the country, gauging opinion and reporting back to Washington. So frequent were her absences that one newspaper joked about the First Lady actually spending a night at the White House.

Eleanor was sometimes seen as FDR’s conscience on social issues, not least civil rights, a subject he would rather avoid, but publically embraced by her. She enjoyed a close friendship with Mary McLeod Bethune, the most senior member of Roosevelt’s informal ‘Black Cabinet’, and more importantly added her voice to demands for anti-lynching legislation. On one occasion, she placed her chair in the aisle of a hall in the south rather than sit in either the ‘white’ or ‘coloured’ sections as demanded by southern law.

Most famously she resigned from the Daughters of the American Revolution in 1938 after its refusal to allow noted African American opera singer Marian Anderson to use its Constitution Hall in DC. Her career survived her husband’s death in 1945, serving on the board of the NAACP and later JFK’s Equal Opportunities Commission, but most significantly was her co-authorship of the UN’s ‘Universal Declaration of Human Rights’ in 1947. 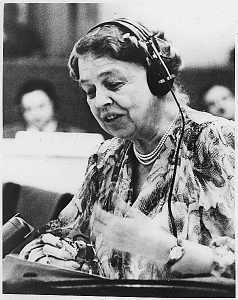 Eleanor Roosevelt addresses the United Nations conference in 1947 (By US Government [Public domain], via Wikimedia Commons)

All this is perhaps made more remarkable by the fact that her marriage to FDR had effectively ended in the 1920s after she discovered one of his affairs (indeed, it would be a mistress rather than his wife by his deathbed in 1945). Divorce would have ruined FDR’s political career and scandalised Eleanor, so the two remained married, but never again intimate. In some respects, the shock of her husband’s behaviour liberated and politicised Eleanor.

Rumours abound about Eleanor’s sexuality, particularly her close friendship with journalist Lorena Hickok, spending many holidays together and even heading on a three-week unescorted (by either the secret service or male chaperones) road-trip around New England in Eleanor’s blue Buick convertible. We will never know whether or not this relationship was physical, but there are those who, with perhaps the best of intentions and seeing the depth of feeling, love even, in their correspondence, wish to impose a modern slant upon it, when the reality may well be altogether more prosaic and innocent.

Eleanor Roosevelt did not ultimately redefine the role of the first lady. She was the first and last activist first lady, her successors reverted to homely and bland, not least the pill-box-hat-powder-pink demureness of Jackie Kennedy.

Hillary Clinton tried to break this trend, with Bill Clinton telling supporters they were getting ‘two for the price of one’. The response of many Americans to this BOGOF offer was precisely that, and after attempting to reform America’s health care system, Hillary stayed comparatively quiet until embarking on her own political career in 2000 after her husband left office.

When her husband ran for the presidency in 1992, one of the crucial questions asked was who had the better cookie recipe, Hillary Clinton or the altogether more homely Barbara Bush? Both published ‘their’ cookie recipes (perhaps Donald Trump could insist that Melania do the same, in lieu of him making his tax records public).

Controversially, and admittedly this was in the days before Bake-Off and Mary Berry was not the judge, Hillary’s cookies proved the tastier. What is even more surprising, given the spirit of the times, is that there was no Republican-led multi-million dollar congressional inquiry to prove that Hillary’s recipe was stolen or that the outcome of the contest was a cover-up.

← 1964: In your guts, you know he’s nuts
The impact of ‘President Trump’ on national security →