The impact of ‘President Trump’ on national security 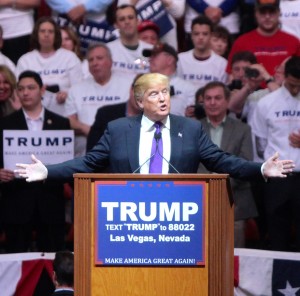 With a campaign dominated by personalities, personal histories and mud-slinging, the European media has given little attention to the campaign policies of Hillary Clinton and Donald Trump.  The area of defence and foreign policy has crucial significance for Europe, and especially for post-Brexit Britain and while his opponents have labelled Trump as the potential cause of World War III, his national security policy has struck a chord with key sections of the American public.

The secret to it lies with the fact that Trump has carefully built his policies on a wide, and historically referenced, set of national defence priorities, that have the support of key military figures.   Some 88 retired generals and admirals have endorsed campaign Trump, offsetting the publicly expressed concerns of senior national security figures such as Colin Powell (retired four star general and former Republican Secretary of State) who has revealed that in November he will be voting for Hillary.  The backing of 88 former military leaders has been trumpeted by Trump’s campaign team as vital evidence of his fitness for high office and the key role of ‘Commander in Chief’.  His opponents have pointed out that over 500 senior retired military figures endorsed the campaign of Republican presidential candidate Mitt Romney in 2012. Nevertheless, Trump’s defence and foreign policies are striking a chord with the Republican faithful.

For Trump, traction with the voters on national security issues impacts in multiple ways. Strong defence and foreign policies remind the voters of key Republican values, of past successes and the perceived weakness of the United States as a global power during the Obama years.  Obama’s foreign and defence policies (with Hillary Clinton as Secretary of State for part of this period) constituted a conscious rejection of the Bush years with its interventions in the Middle East, and a steady stream of casualties from the “War on Terror”.  The rise of ISIL (DAESH), growing lawlessness in Libya and Afghanistan, rapprochement with Cuba and Iran, and growing challenges to American military power from the South China Sea to the Persian Gulf, suggest a growing weakness of American power in global terms since the advent of the Obama administration.

Trump’s campaign team has attempted to suggest that Hillary Clinton is personally implicated in this decline.  Her use of a private e-mail server, the subject of an FBI investigation which was dramatically re-opened in the dying days of the campaign, matters because the server was hacked (probably by a foreign power) and the e-mails on it contained information detrimental to national security.  That in turn, Trump maintains, raises questions about her fitness for the office of President and Commander-in-Chief.

For the American public, the problems in American foreign policy since 9/11 also underline a longer-term threat:  the approaching eclipse of the economy of the United States by that of China.  The key question will be whether the United States will be able to remain the world’s only superpower with an economy ranked second in the world.  For the residents of the world’s only superpower this is not a comfortable future to ponder.

The national security solutions which Trump offers the American public are rooted in American naval power which he argues is the key means of power projection around the globe.  To be a global power requires a global presence and global security in the eyes of Trump with trade and security vitally intertwined.  The revival of that naval power, and the forging of a new relationship between state and industrial base, further offers the prospects of defence contracts and a revival of American shipbuilding.  The slogan for Trump’s national security policy ‘Peace through Strength’ is purposefully borrowed from Ronald Reagan.  So too is his naval policy.  In a speech in Philadelphia in early September he went to considerable lengths to emphasise the military decline of the United States during the Obama years:

Trump’s policies call for: a 350-ship navy (the same standard of power that Reagan put forward to the American public in 1980) with immediate modernisation of the United States Navy’s fleet of cruisers; an army of 540,000; and a United States Air Force of 1,200 fighter aircraft.  These policies will be coupled with increased investment in cyber warfare, as the United States military increasingly relies on network-centric warfare for its superiority over other forces.  Trump is at pains to argue that this military build-up is not the basis for new adventurism in foreign policy, but a necessary national insurance policy for a global trading power that will emphasise ‘diplomacy, not destruction’.  Appeals to the patriotism of the electorate, and promises of more support for veterans, make Trump’s national security policies one of the strong points of a sometimes lacklustre, sometimes disastrous, campaign.

While the national security policies of President Trump (should that eventuality come to pass) might satisfy the concerns of many American voters, they would likely lead to serious disagreements with Europe.  Trump shares long-standing Republican concerns that in Europe and Asia America’s allies have relied for too long on the generosity of the American taxpayer.  He has expressed his irritation at the failure of most states to adhere to the NATO goal that its members should spend at least 2% of GDP on defence.  To many on the right of American politics Europe continues to lavish money on social security and health services while the United States military deters a resurgent Russia under Vladimir Putin.

In the event of a Trump victory on 8 November there is likely to be a striking shift in American foreign policy and, as Brexit shows, states need a plan ‘B’ in the event that the electorate confounds the best laid predictions of the pollsters.  The implications of a Trump victory for the North Atlantic Treaty Organisation, and the security of Western Europe could be very considerable, and as baseball legend Yogi Berra once famously declared: ‘It ain’t over till it’s over’.

← 2024: Pocahontas, Buicks and Cookies: Michelle’s route to the White House
And the Winner of America Decides 2016 is… →