It’s ten years since Practice as Research in Performance (PaRIP for short) ended its five year project. Launched in 2001 with funding from the Arts and Humanities Research Board, PaRIP’s remit was ‘to investigate creative-academic issues raised by practice as research, where performance is defined, in keeping with AHRB and RAE documentation, as performance media: theatre, dance, film, video and television.’ 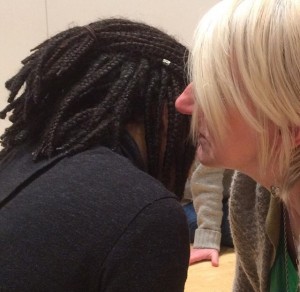 PaRIP launched the year after I started my PhD, and continued for three years into my post-doctoral research. There was something dauntingly reassuring in knowing that PaRIP was there; when you presented work at one of the various conferences, symposia, or regional group meetings, it was guaranteed that questions would be asked of you. These questions would be hard, searching questions. Often they could shake confidence, but just as often they could buoy you up.

I don’t think it fully occurred to me at the time how privileged those of us working on research and doctoral projects through practice, were to have the support of a large network of interested peers and future colleagues. But as time has gone on, and as I have begun to support my own doctoral students, I have begun to realise just how lucky we were.

As I currently run the Doctoral Training Centre for Arts & Humanities at Plymouth University, which requires me to think about the training needs of doctoral candidates working in the Faculty, I am increasingly coming to realise that ‘training’ is not just organising sessions about research ethics or archiving. These are doubtless a vital part of preparing students, but so too is providing contexts in which questions can be asked, uncertainties shared. Being surrounded by people who are in the same boat, talking to potential examiners, and realising that they are also struggling with some of the same fundamental questions, all of this helps emerging scholars enormously.

And so Talking About Practice was born. In conversation with my research partner Dr Joanne ‘Bob’ Whalley, we crafted the following call:

This is an invitation to communities of researchers who are interested in questioning, critiquing and shifting terrains of knowledge. We would like you to join us at Plymouth University in our brand new theatre space, The House to talk to practitioner-scholars with interests in curatorship, dance, fine arts, media arts, music, performance and theatre. Our intention is that inter / multi / trans-disciplinary voices will be heard, offering perspectives from a range of artistic lenses, exploring ideas both through on-going enquiry with reflective, reflexive and refractive practices, and through the corralling and capturing of more fully formed projects. Through a cleaving of narratives across disciplines, by finding porosity at the edges of cognate fields, and by exploring the limitations of a priori knowledge within disciplines, we hope to open valuable conversations around the methodological approaches to practice as a knowledge generative process.

While this was exactly what we wanted to happen, what we didn’t mention in the call was that our primary goal was to give a space over to conversation, networking, and sharing. We wanted to have a range of conversations and workshops that would provide a context in which to rigorously interrogate practice as research (or practice-based research, or practice-led research, or perhaps just practice research – but those are distinctions perhaps better explored in a future blog post).

We brought together a range of scholars working through practice to engage with postgraduate students working through similar strategies. Across Saturday & Sunday, a range of practitioner scholars from across the UK came to present papers, contribute to round-table discussions, and present workshops. These two days were full of exchanges, arguments, mistakes, debates, all undertaken in an incredibly supportive environment.

Over the weekend, a great many issues were opened up through the papers, the workshops, and during the various feedback sessions: What happens when the inherent openness of practice driven research processes encounters the programmatic ‘milestones’ of the PhD? Have REF panels reinforced a schism between the body and the word in thinking of practice as part of a portfolio submission? Has the ‘fight’ to have practice recognised as unproblematically knowledge generative been won, or is the project ongoing? And is ‘fight’ a helpful word to use anyway? These are just some of the question that began to emerge. 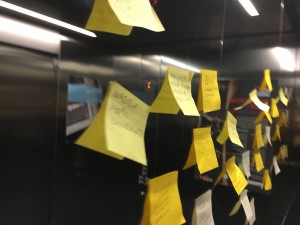 We asked if were institutionalised in our relation to research practice, and is that something that should concern us anyway. We wondered how process might be captured and communicated in advance of actually going through it; how might uncertainty be captured in a Gantt chart?

Some talked about the PhD as a game, and of the need to understand the rules, to play along when helpful, and to cheat when not. Others pushed back against the idea of ‘cheating’, seeing the need for subversion of institutional rules and regulations of the PhD as an indication that the academy hasn’t shifted as much as is claimed, that if we have to ‘cheat’ the system, then the system has only paid lip-service to alterity in research practices. We talked about waves of PAR (1st and 2nd waves of Practice as Research) and we wondered if the analogy was helpful. No consensus was achieved, and in the process sometimes we said things we didn’t mean, and found ourselves picking fights that were not our own.

Most importantly though, we all gave ourselves the space to make mistakes, to mis-speak, to clarify, to change sides, to argue without rancour. I think this was due in no small part to the generosity of those running the workshops, those offering the papers, those trying to find some way to get critical purchase on the slippery nature of practice, and to do so in front of a crowd.

Although there was no sense that we were trying to replicate PaRIP (how could we, PaRIP was a funded five-year project with a fully resourced team?), we were trying to capture something of the flavour of the exchanges. By bringing together practitioner-scholars at various points in their careers (from MA students through to professors), we were able to provide a rich environment in which to share our experiences, and begin to look for cross-overs and moments of exchange. An attempt that for the most part was successful.

It’s difficult to fully quantify just how far the conversation has moved on since the days of PaRIP, or if the conversation has moved on at all. What is clear is that many more PhDs are being undertaken through practice, and many of these students are being supervised by academics who undertook their own doctoral studies through practice. The landscape is slowly shifting as confidence in the value of practice as a means to generate knowledge grows.

When planning this event, Bob and I had assumed it would be a one-off, but in the final session on Sunday, it became clear that there is a real appetite for conversations to continue. It seems certain that we will be organising a similar event next year: watch this space.