BY TERI BAILIE AND JAMES HARPER

We arrived at Plymouth University on 5th February 2016 for a postgraduate Practice Research Symposium, organised by Natalie Raven and Steven Paige who are PhD students in the Performance.Experience.Presence research group. We were excited to attend our first ever symposium and we were full of questions. How is a symposium laid out? Is everyone going to be intimidatingly intelligent?

The day kicked off with a keynote address by Dr Rachel Hann, lecturer in scenography at the University of Surrey. She spoke about Practice Research and how for years artist-researchers have been hung up on the micro-politics of terms like practice-as-research, practice-led-research and practice-based research. Hann made the argument that “first wave” practice-researchers had to argue the legitimacy of their processes and methodologies. They fought administration and demonstrated that their artist-research projects could be held within the academy. 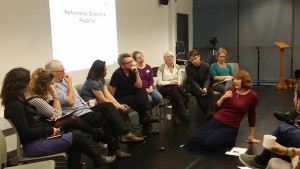 Presenters at the Practice Research Symposium, with Dr Rachel Hann (on the floor), 5 February 2016

Hann posited that we may be in a ‘second wave’ of Practice Research now. We no longer have to negotiate the administrative boundaries of the academy but instead can push at what can be achieved. This was a great message to hear as masters students: that there is a generation of practice-researchers ready to support and engage with the work that we are producing or may produce in the future.

The day was sectioned thematically into ‘bodies that matter’ and ‘between the digital and the analogue’. Two performance-presentations were given, one by Frederico Visi and one by Eve Wedderburn. 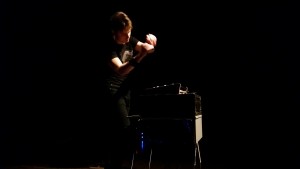 Visi is a researcher, composer and performer conducting his doctoral research at the Interdisciplinary Centre for Computer Music Research (ICCMR) at Plymouth. His performance saw him negotiate the sound production between an analogue synthesiser and digital motion sensors which capture biologic signals to create sound. His aim was to ‘explore the constraints that both interface paradigms impose on the gestural behaviours of the body and to use such constraints as constitutive expressive elements.’

Wedderburn is a PhD student in Performing Arts at Middlesex University, undertaking practice research into Kung Fu as actor training. Her presentation included Kung Fu sequences from her training practice to ‘contextualise the critical concerns that working with martial arts has raised.’ 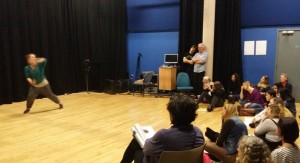 Although these performance-presentations were from different subjects, the methodological use of Practice Research bridged the gaps in understanding subject specific terminology.

The symposium featured a great variety of speakers, not only in terms of subject but also their location within the research process. Davina Kirkpatrick from the University of West England is due to complete her doctoral research very soon. In her paper, ‘Stories, lost voices and absence through loss of people and landscapes,’ she discussed interdisciplinary theoretical perspectives on bereavement, grief, memory studies and collaborative practices.

On the other end of the scale we heard from Gemma Chatwin of Plymouth University who is in the midst of her ResM research. Her project, ‘Creating Gemella’, explores relationships between character and female celebrity in social media by making an alter ego. Although these artist researchers are at different points in their processes – and every other other stage of research was represented at the symposium – there was a great sense of support and camaraderie.

The symposium offered a fantastic opportunity to recognise the exciting work happening all over the UK and to make contacts with other postgraduate researchers from many different institutions. We left feeling excited and invigorated to start contributing to the eclectic field that it is Practice Research.