On 25th November 2016, Plymouth University had the honour of holding the latest New Voices Conference, organised by the Association of Art Historians (AAH). This whole day took place in the university’s beautiful Mast House building, located in Sutton Harbour, with stunning views across the waterside.

The title for the conference was Art Outside the Gallery and it encompassed nine presenters, and keynote speaker Dr Jody Patterson of Plymouth University. The audience of approximately sixty comprised undergraduate and postgraduate students from Plymouth University and other members of the AAH. The aim of New Voices is to encourage its membership of PhD students to share their projects

The day was split into four sessions; the first session, titled Artistic Identity and Spatial Interventions, began with Yang Chen of Central St Martins, University of Arts London, whose paper was Exhibition in the Theatre: Experimentation as Another Way of Exhibiting Artistic Expression – What Jikken Kobo’s ‘The Joy of Life’ can introduce to exhibition studies.

Yang explained that Jikken Kobo was a Japanese avant-garde collective of the early 1950s.  She spoke of their first project that took place in Tokyo at the opening of Picasso’s retrospective in November 1951, and that took the form of a ballet.  Arguing that the performance worked as an experimental strategy, without actual artworks, artists or curation, Yang suggests that this equates to a mode of exhibiting outside the gallery.

Marta Zboralska (University College London) spoke about the studio of Henryk Stazewski and Edward Krasiŉski. She discussed site specificity with regard to the work of artist Krasiŉski. A complete photographic representation of Henryk and Edward’s studio moved to Warsaw Foksal Gallery, which was built after Henryk’s death in 1989.

After the exhibition, these photographs were returned to the studio, and placed in proximity to the objects they represented, bringing the exhibition outside the gallery. Marta asked where the space of production ended and where exposition began.

Finally, speaking at the end of the first session was Gráinne Coughlan of Dublin Institute of Technology; her talk was titled Representing Reality; Visual representation in the work of Stephen Willats and its potential within contemporary community outreach programmes. Gráinne discussed socially engaged art through Stephen Willats’ use of diagrams to convey social realities.

Focusing on Homeostat Drawing No. 1, that provides an image of the sense of stability in reaction to disturbances within the environment, Gráinne considered that it and other diagrams, could be used as a method of exploring relationships between concepts and reality.  This, in effect, removes them from the gallery space as they have the potential to become tools for reshaping social environments.

The second session, Challenging Boundaries and the Conceptual, began with Flora Dunster, from the University of Sussex, with her talk Art “Outside” the Gallery: Derek Jarman’s Public Queerness. Flora started her paper with the notion of queer subjectivity in the 1970s and 1980s. She considered Jarman’s exhibition Queer at the Manchester City Art Gallery and a performative work that centred on his canonisation by the drag collective The Sisters of Perpetual Indulgence.

Whilst the exhibition was held inside a gallery space, its title Queer outed Jarman, and problematized his acceptance within the art world.  Flora also spoke of the processes of canonisation that took place through the representation of Jarman’s home, which was both filmed and photographed, problematizing the separation of the public from the private sphere.

Regine Ehleiter, from Hochschule für Grafik und Buchkunst Leipzig, whose paper was called “My Gallery is the World Now” – Seth Siegelaub and the catalogue-as-exhibition, focused upon Siegelaub’s exhibition titled July, August, September 1969. His project attempted to move the exhibition space away from the gallery into the space of the catalogue whilst situating its artworks anywhere in the world. This would, he hoped, perform a decentralisation of the artworld.

Regine contextualised July, August, September 1969 as taking place just as conceptual art was beginning to be develop. She suggested that although Siegelaub’s attempt could be read as a failure, it did manage to challenge the imposed boundaries of the gallery space.

Finally, for session two, Ana C Varas Ibarra (University of Essex) presented her paper titled Art Production, Art Consumption and the Process of Gentrification, which questioned how the gentrification of the urban space affects the production and consumption of art and, conversely, how art may shape urban spaces.

Ana believes that artists are already complicit in cultivating and refining areas but questions whether they are aware of the repercussions of producing art for the middle classes which has pervaded the practices of gentrification and renegotiated the urban spaces for elites. 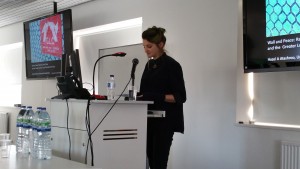 The third session, Public Display and the Mural, opened with Ben Wiedel-Kaufmann (Plymouth University) with his contribution Battersea: The Good, the Bad and the Ugly: Contestation at the Factory Walls. Ben’s talk focused on left-wing politics and mural painting, in particular a London mural produced by artist Brian Barnes and one hundred collaborators.

Ben spoke about the mural’s connections with the left-wing and the regeneration of de-industrializing urban landscapes, and how it was used as a means of localised political intervention. Finally, Ben questioned what the absence of critical references to this mural in art historical reports could tell us about the subject.

Hazel A Atashroo (University of Southampton) presented her paper on Walls of Peace: Radical Cultural Policy and the Greater London Council’s Nuclear-Free Zone.  Hazel focused on the sponsorship of anti-nuclear works by the Greater London Council in 1983 which include poster campaigns, art exhibitions, murals, concerts and theatre productions, and how these campaigns caused embarrassment to the British government.

She questioned how investigations of these cultural projects, associated with new social movement activism, produced for the GLC Peace Year, can enhance our understanding of the period’s perceptions of international politics and the nuclear state.

Our final presenter for the third session was Dr Nikki Frater (Plymouth University), speaking on The Paradox of the Private Public Mural. Nikki discussed various private murals that, by their very nature, are outside not only the gallery space but also art history itself.

She presented a number of great images of the murals discussed, which included Robert Lenkiewicz’s private mural at Port Elliot for the Earl of St Germans and three murals by Rex Whistler, the public mural in the restaurant of the Tate Gallery and the private murals at Mottisfont and Plas Newydd. All three private murals are now on show to the public; Nikki asked whether these murals contain a new meaning for this new audience. 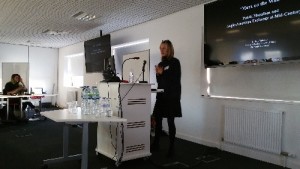 The Keynote Presentation was delivered at the end of the day by Dr Jody Patterson (Plymouth University) on the subject of Public Muralism and International Exchange in Britain at Mid-Century. Jody’s talk focused on transitional alliances and Anglo-American exchanges within art.  In the early years of the twentieth century artists in both the UK and the US were facing similar problems, the grim and inhumane reality of poverty and mass unemployment.

Jody spoke of the federal funding for public art by the Works Progress Administration (WPA) in the US, bringing about the revival of large scale painting in 1930s. In turn, the introduction of mural painting in Great Britain heralded the adage “the mural is the way of the future”. The UK took their cues from their American counterparts.

Jody discussed the effect that mural painting had on public morale, saying in addition that it was seen as a suitable medium for socialist and Marxist programming. Muralism provided an evocation of the Communist Manifesto and it was noted that art could be used as a weapon in the class struggle.

The event was brought to a close by Dr Patterson thanking the organisers of the day, Amy Robson and Ana Bilbao of the AAH Student Members Committee and two post graduate students from Plymouth University, for arranging and coordinating such a successful event.  There was also a reminder that each of the speakers were members of the AAH and that membership can provide great opportunities to share and present work to a wider audience.

The occasion carried on into the evening with a Speaker’s Dinner held at The China House where the conversation flowed and further connections were made. Altogether an interesting and informative day with related, but diverse, connections to “Art Outside the Gallery”.

Nicola Wakeham is a postgraduate research candidate on the ResM Art History course at the University of Plymouth. For more information about our postgraduate study opportunities in the arts & humanities, please visit the Arts and Humanities Doctoral Training Centre.