Benjamin Pothier, a Plymouth University PhD candidate in the Planetary Collegium research group, is successfully back from a Mars analog expedition to the Atacama desert in Chile.

On 1st February 2017, he joined a group of explorers and climbers, including astronaut candidates from the PoSSUM program, for a 15 day expedition to one of the harshest environments on Earth and the most similar environment to  Mars on our planet.The expedition was led by Dr Ulyana Horodyskyj, C.E.O of Science In the Wild and a world renowned glaciologist and geologist. During the expedition the group attempted to summit the Ojos Del Salado, the highest active volcano on Earth. 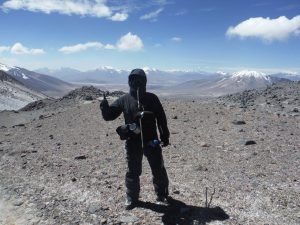 During the expedition Benjamin had the opportunity to direct a 360 immersive film project in collaboration with virtual reality production studio HERVE.

One of the artistic projects related to the Atacama expedition, this project has received a postgraduate research grant from the School of Art, Design and Architecture at the University and will be developed in the coming months in collaboration with Lee Nutbean, a PhD candidate in i-DAT as well as Daniela Depaulis, guest researcher at Amsterdam School for Cultural Analysis, University of Amsterdam.