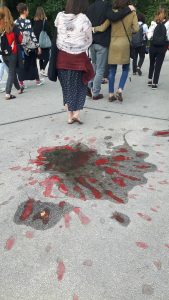 As part of the successes of the last Research Excellence Framework, the School of Humanities and Performing Arts developed an initiative to support current Postgraduate Research students in 2019, to fund activities they may wish to undertake as part of their current research.

This summer, Jayne Buchanan, University of Plymouth PhD Art History student, received funding to assist in attending an intensive Art History summer school in Sarajevo, Bosnia and Herzegovina run by KUMA international. This week long event provided an opportunity to develop her research and learn more about the history and current trends in the area.

Jayne’s Doctoral research is focused on the representation of the soldier in contemporary art, specifically during the war in Yugoslavia where British forces were part of the United Nations peacekeeping activities and when Peter Howson was employed as a War Artist by the Imperial War Museum. Jayne commented,

“While my research examined how artists from Britain responded to these conflicts and the soldiers who fought in them, I was aware this was a very one-sided view. This trip was a great opportunity to understand how art had been affected by war in the region and how local artists had responded.”

Sarajevo was under siege for 4 years, from 1992-1996, and while journalists and photographers could travel in and out with relative freedom, civilians were subjected to constant sniper attacks and mortar bombing.

“This was a violent and bloody war – I knew that from Peter Howson’s work. This was a war where neighbours turned on neighbours, where the forests were home to unspeakable cruelty, so I visited the area with some trepidation.”

She notes there are still some very visible signs of conflict in the city, such as the Sarajevo Roses (where mortar craters have been turned into sites of memory by adding red resin to the scars) and the many buildings that are still marked with gunshot damage.  The summer school itinerary included an impressive collection of speakers: historians, artists and researchers.

“Importantly for me, this was a reflection on the war from a local perspective. I was able to meet with many artists and curators who had lived through the war, such as Nermina Zildžo, an art historian and former curator at the National Gallery of Bosnia and Herzegovina, Ron Haviv, the photojournalist known for Blood and Honey: A Balkan War Journal, and the painter Maja Ružnić who was a teenager in Sarajevo during the siege, but who moved to the United States to study.

The stories I heard were deeply moving, but also emphasised the important role the arts play in remembering and memorialising war. This was a very recent conflict, perhaps overlooked by the traditional narrative of art history, with a whole community of survivors.”

Jayne is looking to develop a journal article based on her research and the findings from the trip.