NEWS: US expert Simone Joyaux to chair CSP’s 15-strong board

The board set up to advise the Centre for Sustainable Philanthropy (CSP) meets for the first time in London today [3 October 2014], chaired by leading American fundraising and philanthropy expert Simone Joyaux.

Joyaux, author of three respected books about fundraising and charity governance, will chair a 15-strong board. As well as leading British and American philanthropy and fundraising experts, the board also counts among its membership a magazine editor, an academic, a peer of the realm and a professional philosopher.

Joyaux, who serves on several nonprofit boards in the USA, says of her role at the CSP:

“We can and must grow philanthropy around the world. The needs are great. The response from the NGO sector must be even greater. And that requires more philanthropy. 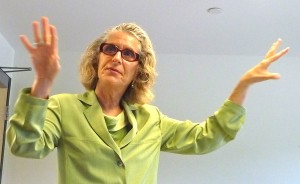 Professor Adrian Sargeant, director of the CSP, adds: “The Centre has only been going since the start of this year but we have made some startlingly rapid progress, with new research projects, establishing our fundraising think tank Rogare, and putting together what is to our knowledge the largest team of researchers dedicated to fundraising and growing giving ever assembled under one roof.

“To oversee us and make sure we stay focused on our objectives, we need a board of the highest quality. I think any nonprofit would be overjoyed to have just a few of the talented and experienced professionals who have agreed to serve on our board.”

Agenda items for the inaugural board meeting include defining precisely the role the board will perform, an update on the progress of Rogare, and the CSP’s fundraising strategy. Board members will also get a preview of the centre’s latest research findings.

The centre will announce details of its doctoral research programme shortly.

The full board of the Centre for Sustainable Philanthropy is:

Simone Joyaux (USA), chair – consultant specialising in fund development, strategic planning and governance. In addition to consulting, Simone speaks worldwide and teaches in a philanthropy graduate programme in the US. She has written three books – Strategic Fund Development, now in its third edition; Keep Your Donors (co-written with Tom Ahern); and Firing Lousy Board Members – and has contributed to several others. Simone regularly serves on boards, often as chair, and currently serves as chair of the board of directors of Planned Parenthood of Southern New England, USA. As a volunteer, she founded the Women’s Fund of Rhode Island, a social justice organisation.

Matt Beem (USA) – president and ceo of the Hartsook Group of Companies and senior fellow at the Midwest Center for Nonprofit Leadership.

Fiona Duncan (UK) – deputy director of the Lloyds TSB Foundation for Scotland. Former chair of the Institute of Fundraising (Scotland) and chief instigator of the Giving Scotland media campaign in 2004.

Tim Hunter (UK) – director of fundraising, Oxfam GB. Helped pioneer relationship fundraising at NSPCC. He is also a member of the advisory panel to Rogare, the CSP’s fundraising think tank.

Lord Hodgson of Astley Abbotts (UK) – former chair of NCVO who led the UK government’s independent review of the Charities Act 2006, published in 2012.

Will MacAskill (UK) – research fellow at Emmanuel College, Cambridge, campaigner for ‘effective altruism’, and co-founder of nonprofits Give What You Can and 80,000 Hours.

Gill Raikes (UK) – ceo, Royal Brompton and Harefields Hospitals Charity. Former director of fundraising at the National Trust and recipient of the Institute of Fundraising’s Lifetime Achievement Award in 2008.

Tanya Steele (UK) – executive director of fundraising, Save the Children and a trustee of the Institute of Fundraising.

Leon Ward (UK) – Consultant at Davidson and Partners and trustee of Plan International. Commentator and blogger on youth charity governance matters and UK Young Ambassador to the Commonwealth.