OPINION: Innovation – delivering the next small thing in fundraising

Innovation in fundraising is focused on small improvements to existing professional practice. But, argues Ian MacQuillin, there is a paucity of innovative thinking to solve ‘big picture’ problems.

You’re walking along Northumberland Street in Newcastle city centre one day in 2013 when a street magician approaches you and offers to show you a few disappearing card tricks. The street magician is working with The Children’s Society fundraisers highlighting the charity’s SCARPA project, which protects the 400 children who run away from home in the city each year.

Impressed, you text your details to register for further information. The campaign, which Civil Society described as “innovative”, was also included as a case study in Lucy Gower’s and Zoe Amar’s Charity Innovation Report in 2014. This report described it as a “completely new approach to getting the attention of people on the street – no other charity has used magicians to start a conversation with potential donors”. The report also described the use of street magicians as “really radical”.

While no other charity has used street magicians in its street fundraising, this is not a completely new approach, since other charities have used street performers: in 2010, Friends of the Earth took to the street with the Arcola environmental theatre group to promote alternative energy sources; and in 2003, Action Medical Research fundraisers were accompanied by a man-sized Paddington Bear, the charity’s official mascot (as editor of Professional Fundraising, I was also there to write up a news story). 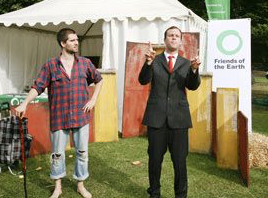 The Arcola Theatre Group perform ‘Don’t Be Bio-fooled’ with Friends of the Earth.

So the idea of using street performance to complement street fundraising isn’t a “completely new” approach. But even if it were, it wouldn’t be “radical”.

For the past few years, ‘innovation’ has been in vogue in the fundraising sector. Charities have appointed innovation managers, reports have been published on innovation, conferences have been held on it (for example the Institute of Fundraising’s innovation conference, which has run for two the last two years) and delegates have flocked to them.

Yet there are two issues with how innovation is applied in fundraising that none of these forums addresses:

A theory of innovation for fundraising

One tripartite classification views innovation on a continuum from incremental, through radical to transformative (see p6 of Dodgson and Gann’s Innovation – A Short Introduction):

Look at the Children’s Society/FoE/Action Medical Research street performance/fundraising examples though the lens of this classification of innovation, and it’s apparent that they are all incremental innovations – there’s nothing ‘radical’ about them at all. What was radical was using street fundraisers for the first time to solicit regular donations. And the transformative innovation that enabled that to happen was the introduction of Direct Debits, replacing the need to rely on one-off cash gifts. There’s a hierarchy of innovation at play:

‘One consultant spoke of her frustration at the reluctance of her clients to try ‘innovative’ ideas: “They just want to stick with what works,” she said.’

But there is no central, cross-sectoral strategy for identifying those areas of fundraising that require innovation on a larger scale. And so there are few ‘radical’ innovations in fundraising that strategically address some of the burning issues and challenges ­– such as how to confront negative public perceptions or bring regular giving attrition under control ­– nor facilitate co-operation between charities on innovative practices and ideas.

Any radical innovations that do emerge – such as the Donor Attrition and Retention Survey, carried out annually by the Public Fundraising Regulatory Association between 2008 and 2013, or bodies such as the ImpACT Coalition – are often done at the behest of a few individual actors and, as they are often not even recognised as being ‘innovative’ (since the term is usually applied to incremental innovation of a specific product), do not result in a widespread strategic application of the innovation.

At the launch of the Charity Innovation Report last year, one consultant spoke of her frustration at the reluctance of her clients to try ‘innovative’ ideas: “They just want to stick with what works,” she said.

And that encapsulates the second issue relating to fundraising innovation – why should you do it. Should you innovate because you need to; or should you innovate because you haven’t yet done it (the two are not the same)? I believe that innovation has taken on normative values. Rather than describing what fundraisers do in certain situations and circumstances (such as radically innovate the concept of face-to-face fundraising or incrementally innovate F2F through street performance), it represents something that fundraisers ‘ought’ to do because innovation is good in and of itself, not just because of what it achieves. 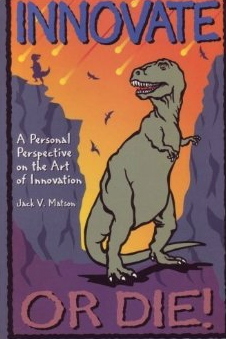 It’s not unusual to hear proponents of innovation misappropriate Darwin. ‘Innovate or die,’ they say, whereas a truer interpretation of Darwinian principles is ‘adapt or die’, since the motivating force of evolution by natural selection is adaptation, not innovation. Organisms adapt to a changing environment; but they don’t innovate a new body design just because they haven’t done anything new for a few million years if they don’t need to (ask the shark – which has become the top oceanic predator using a body plan that’s remained pretty much unchanged for the past 350 million years, because it is so well adapted to is environment).

The words ‘innovation’ and ‘adaptation’ both refer to change. Adaptation seems to describe something all fundraisers do when they are forced (either reactively or proactively) by circumstances to do so. It’s a neutral term. It’s so mundane and run of the mill that fundraisers probably don’t even realise they’re doing it. Innovation, by contrast, is more normative and value-laden and seems to me to be something fundraisers do because they want to do it, or feel they ought to do because other charities are, but not necessarily done as a specific response to a specific set of current or future challenges.

‘It’s not unusual to hear proponents of innovation misappropriate Darwin. “Innovate or die,” they say, whereas a truer interpretation of Darwinian principles is “adapt or die”.’

To be blunt, I wonder whether some fundraisers are aiming to innovate just for the sake of innovating – maybe there is a kind of neophilia at play, with people putting a lot of value on doing new things because they are new. The obvious danger with this approach is that a successful product or practice can be deemed due for replacement simply because it’s been around for a long time.

The question is whether fundraising innovation needs to shift out of its normative, value-laden mindset into something that more closely resembles strategic adaptation – identifying the changing situations to which fundraisers must adapt, and deciding whether those changes should be met with an incremental, radical or even a transformational innovation. 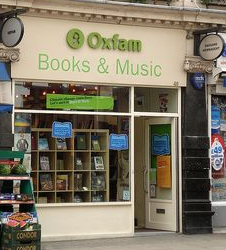 An Oxfam specialist book and music shop – an incremental innovation on the radically innovative charity shop.

There’s nothing wrong with incremental innovations – it’s how we get our faster cars and flatter-screened TVs. And in fundraising, it’s how we got street performance F2F, enclosures in mailpacks (which may or may not be a good thing), specialist charity shops (books, furniture, vintage clothes etc), and a pandemic of social media virality. And it will be how we get even better fundraising in the future.

But for many fundraisers, it seems that innovation and new product development really are synonymous. I know of at least one major charity that has stopped using the term ‘innovation’ because of some of the normative connotations I outlined above. Instead it now refers to the unit that was tasked with handling innovation as the ‘product development team’.

For individual charities, you can’t argue with this – they are going to innovate for themselves, not on behalf of the rest of the sector, and rightly so. But this ‘new product mentality’ blinds us to the fact that co-ordinated innovation is needed to tackle issues that affect all fundraisers at all charities.

At Rogare, we’re wondering how we can harness the energy that is currently devoted to incremental innovation in product development to solving those big picture fundraising challenges – seemingly intractable problems such as how to improve the public perception of fundraising, increasing donor retention, growing charitable giving overall, and a myriad others.

The British Red Cross’s Mark Astarita has questioned the ‘Primark’ approach to fundraising that drives down the cost of saving the world to a £3-a-month ask, and is fearful about how fundraisers will in future be able to get increased value from a declining pool of potential donors. The solution is unlikely to be found in incremental innovations in various fundraising methods – individual fundraisers working on incrementally improving their own plot of the fundraising garden – but in radical, or even transformative, new fundraising ideas (Rogare is, I believe, one of these radical innovations).

To successfully tackle the big issues, we need to start thinking more innovatively about innovation.

6 comments for “OPINION: Innovation – delivering the next small thing in fundraising”