Proud to be a Fundraiser, Rogare/CSP news

NEWS: ‘This is a fundraising office’ – put up our manifesto and be proud

With fundraising seemingly under constant attack from the media and government in the United Kingdom, Rogare has launched a new fundraising ‘manifesto’ to remind fundraisers they do something to be proud of.

Titled ‘This is a fundraising office’, it is based on Beatrice Warde’s famous ‘This is a printing office’ manifesto that was posted in almost every print room in the English-speaking world during the 1930s and 1940s, and is cast in bronze outside the US Government Printing Office in Washington DC. 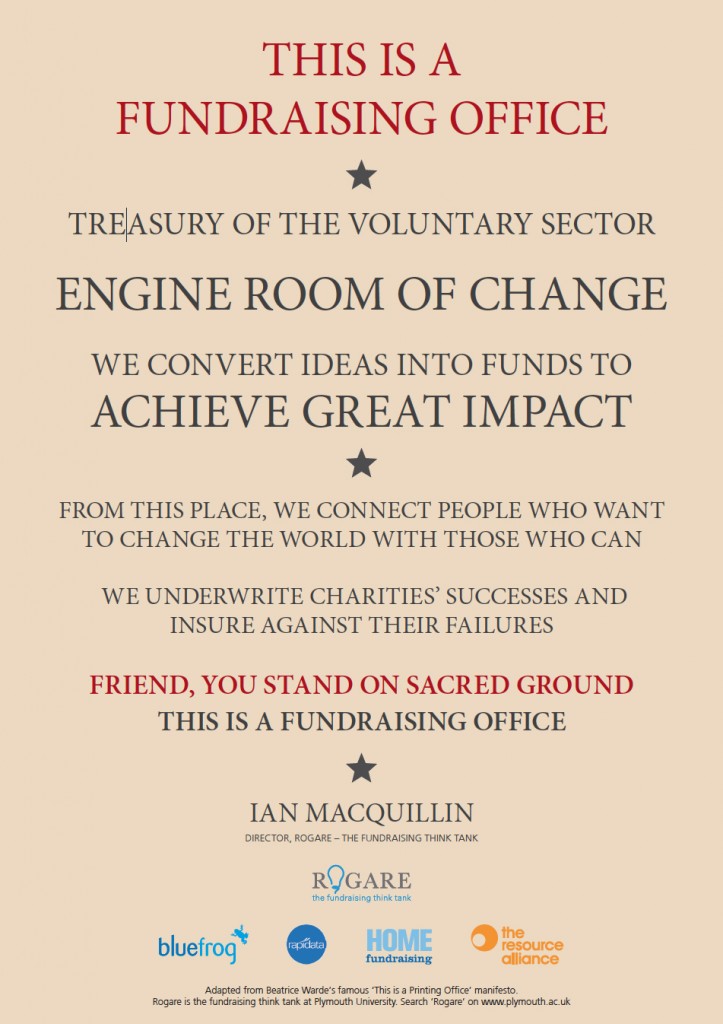 Ian MacQuillin, Rogare’s director, says he hopes the Rogare manifesto will do for fundraisers what Warde’s did for printers – instil a sense of pride in what they do:

“Fundraising is a noble vocation and fundraisers everywhere should share a sense of pride in their profession.

“Yet a shared experience of being a fundraiser globally seems to be a lack of understanding by the media, public and government of what fundraisers do. This too often turns into disrespect, hostility or contempt, not just about how fundraisers ask for money, but that they even do so at all.

“It must be very hard for fundraisers to feel proud of the fact that they ask people for donations in such as climate. I hope that putting this manifesto on display will remind anyone who visits the fundraising office just how vital fundraisers are to the lifeblood of their organisations.”

The manifesto has been supported by all Rogare’s Associate Members, but special thanks go to Bluefrog for their excellent design and production. The manifesto was launched at the Institute of Fundraising National Convention this week.

Download a hi-res PDF copy of the manifesto here.

For an account of the genesis of the manifesto, the thinking behind it and why we’ve based it on Beatrice Warde’s ‘This is a printing office’, take a look at Ian MacQuillin’s blog on UK Fundraising (this describes an earlier iteration of the manifesto).

NB, if you are interested in finding out more about Beatrice Warde, and are quite interested in fonts and typefaces generally (some people are, including Rogare’s director), you could do worse than get a copy of Simon Garfield’s Just My Type.

7 comments for “NEWS: ‘This is a fundraising office’ – put up our manifesto and be proud”