Ethics, Professionalism, Proud to be a Fundraiser, Rogare/CSP news

KNOWLEDGE: The effect of ethical decision making on fundraisers’ sense of moral identity

Fundraisers’ sense of themselves as moral individuals is damaged by having to make the difficult ethical decisions they encounter every day in their jobs, new research conducted by Plymouth University’s Centre for Sustainable Philanthropy (CSP) has revealed.

But those fundraisers who feel most proud at being a part of their profession suffer significantly less damage to their moral identity than their colleagues who say they have low levels pride in their job.

Summary of research conducted by the Centre for Sustainable Philanthropy at Plymouth University.

The CSP moved its Plymouth Charity Lab to the Institute of Fundrising National Convention in London in July to test fundraisers’ sense of professional self-worth. More than 220 delegates – who either identified themselves as a fundraiser or as a non-fundraiser – responded to a series of questions and tests to assess their implicit and explicit moral identities.

Explicit moral identity is what someone says about themselves and was measured on two dimensions:

It was tested by asking people to agree or disagree on a nine point scale with statements such as:

“Being someone who has these characteristics (e.g. kind, caring and honest) is an important part of who I am.” (Internalized explicit moral identity.)

“I am actively involved in activities that communicate to others that I have these characteristics.” (Symbolic explicit moral identity.)

However, It is a well-known phenomenon in psychology that what people say about how they feel is not necessarily how they really do feel. So delegates were also tested on their ‘implicit’ moral identity by assessing how quickly they responded to specific words that were flashed up on their workstations.

Participants had press keys as fast as they can in response to some words that appear in the middle of a computer screen. On the left screen that you see below, for example, people would press the ‘E’ key on the keyboard when a word relates to self or immoral and the ‘I’ key if it relates to moral. On the right screen, people would press the ‘I’ key if the word relates to self or moral or the ‘E’ key if the word relates to immoral. By switching locations and words, we are then able to establish how quickly people associate themselves with being moral.The advantage of this implicit moral identity task is that it is extremely difficult for people to ‘lie’.

Participants completed the implicit and explicit moral identity tests twice, either side of responding to 15 ethical dilemmas a typical fundraiser might encounter in the day-to-day jobs. Examples used in the study were:

You have developed a relationship with a major donor over the past four years.

During a regular quarterly meeting, this donor suddenly insists on paying for your meal, as you provide thorough reports of how their gifts make a measurable impact.

What is the maximum amount for lunch that you would consider acceptable for the donor to pay?

It has recently been highlighted that an elderly individual has been giving to 27 charities through monthly direct debit and receiving an average of 250 solicitations per month from various charities.

What do you believe is the maximum number of solicitations an individual should receive from our sector in a typical month?

Researchers then compared the second set of moral identity results with the first to see what the effect of making difficult ethical decisions had been.

B) Main findings and conclusions

Before going through the ethical decision making set-up, fundraisers and non-fundraisers felt equally good about themselves, with implicit moral identity scores of .36 (out of 1) and .39 respectively.

Having tackled the 15 ethical dilemmas, fundraisers’ implicit moral identity score dropped 22 per cent to .28, whereas the average score for non-fundraisers dropped only to .38.

This means that fundraisers felt worse than non-fundraisers after they had made an identical set of decisions, even though the results show they chose to answer in almost identical ways.

Given fundraisers are already hurt more than non-fundraisers, the researchers then looked at sub-groups of fundraisers, exploring whether those with a high professional identity (i.e. feeling proud of being a fundraiser) were able to shield themselves from any negative effects of ethical decision making.

The research didn’t find any difference in implicit or symbolic moral identity.

But fundraisers with a high level of professional pride were able to shield themselves from the effects of ethical decision making by protecting their internalized explicit moral identity, which dropped by only .06 from 8.15 to 8.09, on the nine-point scale (see Fig 1). 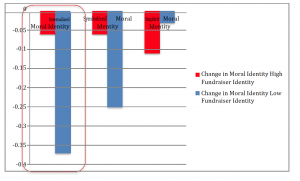 For fundraisers feeling less proud of being a fundraiser, their internalized explicit moral identity reduced by .37 from 8.05 to 7.74. This is a six times reduction in how important being a moral person feels to them.

This means that those with low professional pride need to pretend to themselves that being a moral person is not an important part of who they are after making the same decisions, while fundraisers with high professional pride do not have to engage in this kind of coping mechanism. Their professional pride protected their internalized moral identity.

“This study brings academic research on professional fundraisers to the 21st century. It moves beyond a 20th-century understanding that relies on snap-shot measures of psychological properties believed to be fixed over time (e.g. personality types, motivational structures, emotional intelligence and leadership and team building styles). It reveals a much more dynamic process of how fundraisers adapt their lives in carrying out their profession.

“It suggests that how fundraisers feel about themselves and about their decisions is an interaction between their professional and moral sense of selves, and the kind of decisions they make every day.

“Our follow-up study will identify positive adaptation strategies that will enable fundraisers to feel proudest about being a fundraiser and most moral (implicitly) about being a person, while making the best moral decisions for their organizations.”

← NEWS: New dates for Massive Fundraising Masterclass
NEWS: What should the fundraising profession do about the Fundraising Preference Service? →

1 comment for “KNOWLEDGE: The effect of ethical decision making on fundraisers’ sense of moral identity”