OPINION: The lobbying bill and the FPS – a counterfactual

Ian MacQuillin rewinds the clock to wonder what would have happened if the government had proposed establishing the Fundraising Preference Service while the lobbying bill was going through parliament.

My guilty pleasure is alternative history science fiction – you know the stuff: what if the Nazis won the Second World War or the Confederacy the American Civil War (one such book I read even had the main protagonist receive some charity direct mail). ‘Allohistory’ (sounds better, doesn’t it?) also has a respectable use in the academic study of history, were ‘counterfactuals’ are proposed to see if they shed any light on the decisions that were actually taken and the way events actually did play out.

So I’m using my own little counterfactual thought experiment to look at the proposed Fundraising Preference Service. 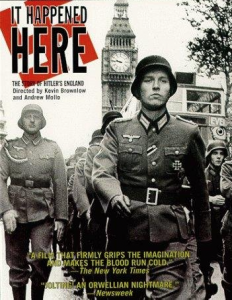 A classic of allohistory – the BBC’s ‘It Happened Here’ from 1965. In a parallel universe, somewhere, Sir Stuart Etherington is leading the fight against the Fundraising Preference Service.

Cast your mind back to the summer of 2013. This was the height of the UK charity sector’s fight against attempts to silence its campaigning voice through the so-called ‘lobbying bill/act’, a fight that was led and co-ordinated by…NCVO. Ironic, isn’t it, that the organisation that fought so hard to protect our sector’s right to ask for change in society is now fighting equally hard to limit and restrict the same sector’s right to ask for the financial support needed to effect that change?

The lobbying act (or to give it its full title, the Transparency of Lobbying, Non-Party Campaigning and Trade Union Administration Act 2014) was and is an anti-democractic attack on free speech and an attempt to neuter troublesome and dissenting opinions that might make life hard for the various vested interests in government.

There is an established school of thought that sees charities as an essential component of a pluralistic, democratic society (see for example, Roger Lohmann’s theory of nonprofits as providing common goods to the public, goods that collectively promote the plurality that underpins social democracy). Any attempt to restrict that plurality is an attack on democracy that undermines one of the pillars of our society.

Now for the counterfactual.

Just suppose that, at the time the lobbying bill was being crafted, someone decided that an excellent way to stop charities campaigning would be to find a way to make their income dry up – if you don’t have the money to campaign and lobby, then you can’t campaign and lobby. Of course, they wouldn’t have been able to insert a clause into the bill preventing organisations from asking for donations – that would be far too blatant. But how to do it through the back door?

“If the FPS is to achieve what it says it will do – allow people to reset all their fundraising communications to zero – then it will have to do that thoroughly and robustly: there can be no exemptions or special cases.”

Here’s an idea: lots of people hate fundraising (and they hated it in 2013). How about playing up public disquiet about fundraising to the point that it seems that ‘something must be done!’ and then proposing a way to opt out of all fundraising in its entirety. Then a couple of clauses can be added to the bill instructing nonprofits to make this opt-out mechanism a reality, in a similar manner to how clauses are currently being inserted into the Charities (Protection and Social Investment) Bill 2015.

I find it absolutely inconceivable that – in the context of a sister proposal to the lobbying bill – NCVO would have supported such a move or thought that it was a good idea in any shape or form. They would surely have seen it as an attempt to undermine the third sector and dilute its independence from government by making it harder to raise the funding that would allow it to maintain that cherished independence. With less independently-raised money, nonprofit organisations would be more reliant on statutory funding and government contracts – and the ‘gagging’ clauses that go with them. (In fact, NCVO was warning about the effects the lobbying bill would have on fundraising in 2013 – an added layer of irony.)

I don’t mean to suggest that the driver behind the Fundraising Preference Service is to undermine third sector independence – it clearly is not ­– but that will be one of its unforeseen outcomes (perhaps not so unforeseen by some people).

If it is to achieve what it says it will do – allow people to reset all their fundraising communications to zero – then it will have to do that thoroughly and robustly: there can be no exemptions or special cases. The FPS will have to apply to large charities and small charities, national charities and local charities, those doing large amounts of DM and those doing hardly any. If the point is to stop all fundraising comms, then that’s what it will have to do, from everyone. It’s not likely to do much for public trust if it doesn’t do what it says on the tin. (Incidentally, if, when the FPS does come into operation, it is garlanded with a suite of exceptions for different sizes of charities, categories of causes, types of donors, ways of asking – well, that will just reinforce what a bloody stupid and unworkable idea it was in the first place.)

Once the FPS has proved its effectiveness and efficiency at restricting nonprofit organisations’ income through DM and phone, what’s to stop it being extended to other forms of communication such as email, especially as charities do more of that to recover their lost income (arguably email and doorstepping should already be part of the FPS)?

And when that’s successful, what’s to stop it being applied to other types of charity communications? I don’t know how you’d make this work – there would be totally different drivers to opting out of receiving info about a cause you care about (why would you want to?) than for opting out of giving to a cause you don’t care about. But that’s just a detail that I’ll leave to the clever policy wonks at Conservative Central Office and the charity haters at the Institute of Economic Affairs to sort out.

Once the principle that people may opt out of (or, let’s not forget, be opted out of by a third party) receiving communications from charities is firmly established, then it’s just a matter of degree and detail what types of communications that principle is applied to.

But perhaps more importantly, just as it was with the lobbying bill/act, the Fundraising Preference Service is another attack on our 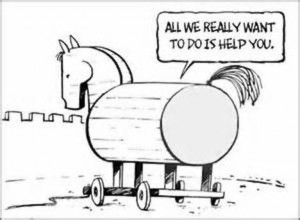 pluralistic society. If the third sector is essential to a pluralist society, as the likes of Roger Lohmann (see his latest book) and Robert Payton assert, then so is the philanthropy that enables the third sector to exist, independently of government. And philanthropy won’t support the third sector without the engine of fundraising to transfer resources from donors to organisations.

Writing in the opening chapter of the book Taking Fundraising Seriously: Advancing the Profession and Practice of Raising Money in 1992, Payton, along with Hank Rosso and Eugene Tempel, wrote:

“We believe that fund raising [sic] is an essential part of American philanthropy; in turn, philanthropy – as voluntary action for the public good – is essential to American democracy. And so we align ourselves with others who believe it is time to take fund raising seriously.”

In 2013, NCVO called the lobbying bill a Trojan horse. Well, the Fundraising Preference Service is also a Trojan horse. And Sir Stuart Etheringon has not only opened the gates to let this Trojan horse in, he sent it an invitation.

← NEWS: Rogare’s relationship fundraising review to be published in January 2016
OPINION: Dare you pick up the poisoned chalice of the FPS? →