The current attacks on fundraising are part of a wider ideology about how charity ought to operate. In the first of a three-part blog, Ian MacQuillin makes the case why the attacks on charity should be thought of as ideological.

Fundraising is currently being subjected to a concerted ideological attack by the state, certain sections of the media and even some from within the voluntary sector.

I don’t normally start my blogs by getting so directly to the point. I quite often employ what is known in journalism as a ‘dropped intro’ – pussyfooting around with something only tangentially-related to the main thrust (such as an account of the last alternative history novel I read) while easing readers into the flow of the piece.

Not this time though. For we have to face up to something that’s been staring us in the face for the past few years but which we’ve not wanted to admit.

Neither is ‘ideological’ some kind of rhetorical insult that can be used to dismiss criticism that is delivered through poorly-constructed, ill-thought through, biased and prejudiced dogma and doctrine – as in ‘oh that’s merely ideology’. If only it were so easy.

So what is it we actually are up against, if it isn’t a political ideology such as ‘conservatism’, and it isn’t mere prejudice?

It’s actually a charity ideology – an ideology that prescribes how the voluntary sector ought to go about its operations.

For the past four or five years, the charity sector, and fundraising in particular, has been subject to a coherent and consistent (though not necessarily co-ordinated – I’ll leave that as an open question for now) assault on its foundations as this ideology has tried to subvert the way charities currently try to do things.

Some of the media attacks of the past couple of months have brought this into focus, particularly the spate we experienced in December:

Do you perhaps think that these are all totally separate, unrelated stories that have just happened to fall at the same time, but with little to unite them apart form the defensive ramblings of a few embittered fundraisers or academics – much less being components of some kind of coherent ‘ideology’?

As Auric Goldfinger says tells Bond about their supposedly ‘chance’ meetings, if something bad happens to you once, you can put it down to happenstance, twice and it’s coincidence, but if it happens a third time, it’s enemy action. All we need do is substitute ‘ideology’ for ‘enemy action’ and that’s where the voluntary sector is right now. 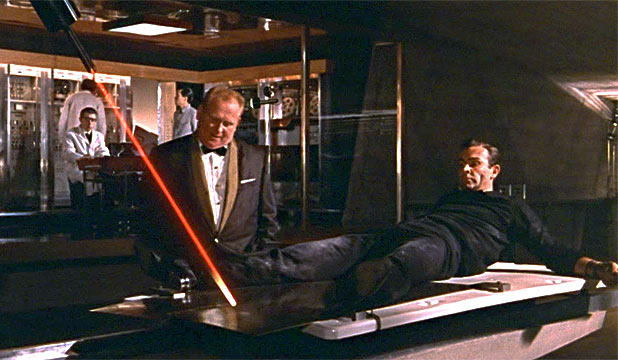 No Mr Bond, I expect you to stick to your knitting.

The lobbying bill, new rules preventing charities using statutory income to lobby government, Fundraising Preference Service, government-appointed fundraising regulators, reams of media attacks on charity policy matters, campaigning and fundraising, and think tank and foundation reports all suggesting charities should, in some form or another, ‘stick to their knitting’.

What is an ideology?

One of the leading authorities of the study of ideologies – Professor Michael Freeden, of Mansfield College, Oxford, and editor of the Journal of Political Ideologies – describes ideologies as (see p3):

“…systems of political thinking, loose or rigid, deliberate or unintended, through which individuals and groups construct an understanding of the political world they, or those who preoccupy their thoughts, inhabit, and then act on that understanding.”

As this quote suggests, an ideology doesn’t have to have been specifically constructed by individuals or groups with a specific purpose, which is why I said above the attacks on fundraising need not necessarily be co-ordinated. The study of ideology is an approach to the way people think about and then act on particular subjects, so it is possible to identify an ideological approach even though no-one person or group authored this approach, or indeed, anyone adopting this approach even thinks of themselves as ideologically motivated.

Professor Freeden points out how ideologies are “major exercises in swaying…public opinion”, and while not every plan is an ideology, it “can be interpreted as part of a wider ideology”. But they still have to be part of a recurring pattern, since otherwise any set of ideas that sprung up and just as quickly withered would count as ideologies. And Freeden says ideologies must be held by significant groups of people. It’s interesting that he says that “significance may refer to the ability to control the media”. And he says that smaller groups – pressure groups for example – might align themselves with one specific ideological tenet (an example he uses is rights of pensioners) that is part of a wider ideological family.

Something else Professor Freeden states quite categorically is (see p56):

“All ideologies begin with non-negotiable assumptions from which logical conclusions can be drawn.”

Freeden is talking about political ideologies. But there is more to ideology than politics. An important contribution to the study of ideology was made by the American anthropologist Clifford Geertz in a 1964 paper called ‘Ideology as a cultural system’.

Geertz conceived of ideologies as metaphors that carry social meaning through the symbols they contain (think about what a ballot box means to people aspiring to become part of a democratic ideology), and as such, ideologies constitute ‘road’ “maps of problematic social reality”.

With this map of social reality to guide you, you don’t need to know or understand every intricate detail that you would need to do if you were to come to your own decisions every time you hit a sticking point. Because someone else has done the thinking and drawn the map, you can use this to guide you around those ideological pinch points.

So we have two concepts of ideology, one relating to a set of organising beliefs, values and opinions, the other to a symbolic ‘road map’ of social reality.

← OPINION: Relationship fundraising – so where should we go next?
OPINION: The ideological attack on fundraising, Part 2 – are you a Voluntarist or a Professionalist? →