Rather than obsessing about whether ‘relationship’ or ‘transactional’ fundraising is better, Joe Jenkins suggests we reframe the debate to look at product-led and supporter-led approaches.

In recent weeks, following the publication of the mighty (in both substance and weight) Relationship Fundraising review by Rogare, there has been increasing debate about what we actually mean by ‘relationship fundraising’ and how it might be different from ‘transactional fundraising’. Ken Burnett (author of seminal work Relationship Fundraising) has weighed in to argue that there’s no such thing as purely transactional fundraising, which Rogare argued back they weren’t claiming anyway. Meanwhile Craig Linton has offered his views on some of the different terms we might wish to consider – distinguishing between three levels (of marketing theory, social psychology and layperson). 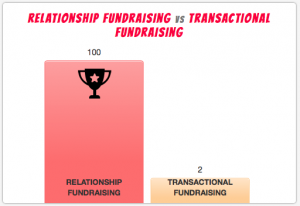 Google Fight has no doubt which is better.

Now, I do believe that clarifying your terms is important. But only so much as providing a good starting point to proceed with getting stuck into the implications and identifying what exactly one might do differently. I fear that as the debate continues, we are losing sight of what all this analysis is actually trying to tell us – and therefore, what options lie ahead.

In the spirit of wishing to move the debate on, I provided some comment to Craig’s Rogare blog and have been encouraged to expand a little further here. In my view, the terms ‘relationship’ and ‘transaction’ have grown too loaded and, as a result, are proving less helpful in determining either strategic or tactical choices. So I propose here that we might usefully distinguish between ‘supporter-led’ and ‘product-led’ fundraising instead.

I believe there are four core elements present within, and driving, all fundraising, at both a strategy and activity level. These elements are:

My contention is that they are always in healthy competition for dominance, and in any given communication or programme, only one of them is the primary driver with the other three in its service.

Supporter refers to the ‘agent’ (person or group) we wish to engage in our activity – their support might comprise of giving time, ideas, voice, cash or other resources. (I can’t resist adding here that I really, really don’t like the term ‘donor’ – but that’s probably another blog).

Product is the offer that engages the supporter – the thing they are encouraged to do.

Message is what we’re trying to say.

Channel is the means of conveying the message and product to the supporter.

I cannot think of any fundraising activity, at any level, that does not require all four elements to be in place. You might wish to add to this list, but to my mind these four are core and ever-present.

At an activity level, one of these elements will always be in the lead, with the others in service. For example:

The product is in the lead – activity is planned to optimise the return on investment of upgrading the value of the member’s regular gift. Therefore, the supporter is targeted on their likelihood to agree to upgrade their gift (perhaps through Recency/Frequency/Value, or a propensity model), the channel is selected according to response rates (typically the telephone), and the message is crafted to increase the chances of securing the product response (perhaps an off-the-shelf telemarketing script with case study, three asks and close).

The supporter is in the lead – the activity is planned on the basis of supporter engagement, to increase their satisfaction and loyalty. Therefore, the channel, product and message are all tailored/personalised to improve the likelihood 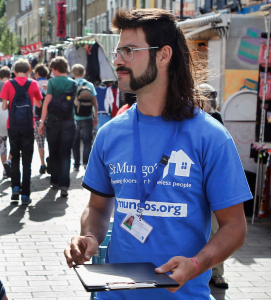 of meeting the supporter need (rather than to optimise the profitability of the specific offer) and metrics are based on experience.

The channel is in the lead – both product and channel are designed to make best use of this means of contacting supporters; and the supporters are randomly involved, not personally targeted.

Save the Children’s Gaza campaign

Message-led activities are quite rare, so I thought I’d use a real example here. In StC’s classic Gaza appeal, the charity started with the message – the need to convey the urgency of the cause and need for action. It was brave and untested, but the message (the importance of raising the issue – calling for a ceasefire in Gaza) came first. From here, the channel was selected (initially press ads), audience related to the channel and the product was developed (SMS text response) to best provide a means of response.

In no case is this a choice of either/or – all four core elements are always involved and playing off each other. You can select any fundraising activity and fairly swiftly identify those four core elements – and which one is leading the other three. Some will align more closely than others (Product and Channel are regular bedfellows). And typically, either Supporter or Product will be the primary element; even more typically, it will be the Product.

I’ve started at an activity level. But more critically, I believe there is a strategic choice about which of these four elements drive the overall fundraising business model. And that in making the choice (consciously or not) you in effect frame your entire strategic framework – your objectives/targets, KPIs, systems, processes, budget construct, people structures, culture and staff skills: what you do and how you do it.

For most charities, I would contend that Product is in the lead and frames the strategy and business model accordingly. Product-led fundraising prioritises the offer in each communication, focusing on cost, margins, and profitability per product. Return on investment (RoI) by product (and channel) is prized, seeking to optimise net income by product and setting a ton of financial metrics that relate to profitability. The budget is typically constructed around product lines, and teams are focussed on managing those products (and trained in the techniques that drive product success). Short-term performance is favoured (primarily to justify the investment per product).

The supporter is not ignored – in fact, most Product-led strategies will have strong strategic statements aiming to place ‘the supporter at the heart of what we do’ – but ultimately, the supporter is always subservient to the product: what they receive will be driven by their responsiveness to each product in relation to its profitability. Supporters feed the product. And of course both Channel and Message are then tailored to ensure each product is as effective as possible.

Supporter-led fundraising is the opposite of Product-led. With a Supporter-led approach, the strategic focus is on the long-term value of the supporter rather than the profitability of individual products. This means prioritising supporter satisfaction, loyalty, engagement, trust and experience. Key metrics are based on the relationship with supporters. Budgets are constructed around supporter value and engagement, teams are trained and aligned to maximise the supporter experience. Emphasis is placed on measuring, targeting and growing the total contribution that supporters make to the cause – valuing their time and voice as well as their financial gifts. The goal is to increase the total lifetime value of all supporters, and spend is judged against return on engagement/value.

It is still necessary to manage the profitability of products and offers; innovation in the portfolio remains important. But each Product (Channel and Message) serves the supporter, meeting their need, providing value to the supporter as well as optimising the value of the supporter to the organisation. The longer term is favoured, as return is understood by lifetime value (LTV) rather than immediate response by product or channel.

The Product-led business model has dominated UK charitable fundraising for the past few decades and has underpinned the majority of growth (with some charities experiencing exponential growth). I do not wish to suggest that the primacy of any one element is inherently ‘better’ than the other. However, I do believe that the collective effectiveness of Product-led approaches has peaked and we are entering the era of the supporter.

Whereas in the past, the majority of charities have adopted the Product model – with notable Supporter-led exceptions – I expect the inverse to be true in the future. And my hope is that the Supporter-led approach might ultimately prove far more successful in not just delivering success for individual charities, but just maybe finally growing the overall level of philanthropy (so that we spend less time competing with each other, and more time increasing the total amount of engagement with our causes).

“I believe that the collective effectiveness of Product-led approaches has peaked and we are entering the era of the supporter.”

[As another aside, much of this debate relates to ‘one-to-many’ types of fundraising. Major value/partnership programmes have of course for many years adopted Supporter-led approaches. But in the UK at least, the individual giving/mass supporter programmes have been the key engine for net income growth and come to characterise fundraising overall. In the new ‘Supporter Era’, this may well be less the case.]

So there will always be products, channels, messages and we will always want them to be effective and efficient. But moving forward, I expect that these elements will increasingly serve the supporter rather than the other way round. Returning to terminology, I propose that it might prove more instructive for fundraising leaders to consider the four elements I’ve described here – rather than getting too obsessed about whether ‘relationship fundraising’ is better than ‘transactional fundraising’ – and take action accordingly.

I suggest that the real strategic choice for each charity today is whether you want supporters to be the primary force that all other elements of your fundraising should serve, or whether product is king. Then align your organisation to optimise your impact.

You can probably guess which way I’m going…

← OPINION: The Fundraising Preference Service – a monologue with stakeholders
OPINION: “A beautiful sunset, mistaken for a dawn”? A ‘re-review’ of Ken Burnett’s ‘Relationship Fundraising’. →

4 comments for “OPINION: Time to reassess our production values”