Professor Adrian Sargeant – director of the University of Plymouth Hartsook Centre for Sustainable Philanthropy – has been honoured by the Institute of Fundraising’s Insight special interest group with their Outstanding Contribution Award.

Sargeant received the accolade at the  IoF Insight in Fundraising Awards 2016 at the Café de Paris in London last week.

“There is no-one who knows more about what motivates donors, what creates loyalty, why donors are committed to some causes over others and the importance of maximizing satisfaction than Adrian.

“His academic rigour has brought an evidence-based approach to the sector that all fundraisers are able to learn from and use in their programmes.” 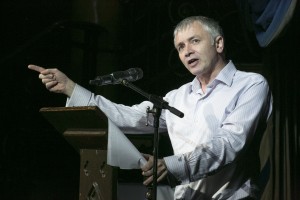 Accepting the award, Sargeant said that it was always “humbling” to receive any award for a contribution made to a profession, “but even more humbling to be honoured in such a way by a room of fundraisers”.

Earlier in the evening Professor Sargeant had told the audience that one of the things that had annoyed him about many of the regulatory measures taken in the wake last year’s ‘fundraising crisis’ was that they hadn’t taken account of the evidence.

Citing the work the HCSP had done with Wood For Trees and Roger Lawson’s About Loyalty, Sargeant said that around 90 per cent of donors were committed to, passionate about, loyal to, and satisfied with the charities they give to. “Companies would kill for statistics like that,” he said.

Despite the ongoing political and media criticisms of their profession, he said that it was “still a good time to be a fundraiser”.

That work on donor loyalty also got an award last week – highly commended in the Most Powerful Insight Through Research category. The judges described it as “groundbreaking research…enabling organisations to have supporter metrics [that] look beyond recency-frequency-value (RFV) analysis”.