Ian MacQuillin explores how total relationship fundraising could ensure that supporters have harmonious relationships in all their contacts with a nonprofit organisation.

Four years ago a local fundraising committee for Macmillan Cancer Support cut ties with its parent organization and ceased fundraising for it in protest at the organization’s use of doorstep face-to-face (F2F) fundraisers in their area, and Macmillan’s refusal to stop using this method of fundraising when the local committee asked them to do so.

The local committee chair described the practice of doorstep F2F as “fundamentally unacceptable”, partly because they believed the use of professional fundraisers from outside the area clashed with their values as volunteers. She said that it was “very upsetting” when Macmillan refused to accede to their ‘cease and desist’ request. As a consequence “we decided as a group that we no longer wanted to be associated with a charity using such high pressure tactics”.

Rogare’s review of relationship fundraising – published in January this year with the support of Bloomerang and Pursuant in the USA ­– looked mainly at how fundraisers could utilise current ideas from social psychology to build better relationships with their donors.

But here is a relationship that has clearly broken down, so much so that one party has actually left the relationship.

“Balance Theory suggests an alternative approach to mystery shopping, by identifying the factors that could lead to unbalanced relationships and probing how a charity responds to a complaint about these factors.”

Is there anything that social psychology can tell us about relationships such as these, and how fundraisers can go about maintaining and repairing them – and preventing them breaking down?

One thing that arises from the Macmillan case is that this isn’t a straight bilateral relationship between a charity and a group of its volunteer fundraisers: there is a third component in this relationship, and that’s the bit that led to the relationship breakdown – doorstep fundraisers.

The local volunteers were fine with the relationship they had with Macmillan, but they were not at all happy with the relationship they had with (they would probably say was forced upon them) the doorstep fundraisers who called at their door wearing Macmillan branding. It was the dissatisfaction with this third component that led to the dissolution of this ‘ménage-a-trois’.

The theory from social psychology that looks at how such three-armed relationships fit together or fall apart is called Balance Theory, advanced by Austrian-American psychologist Fritz Heider in his 1958 book The Psychology of Interpersonal Relations.

Balance Theory is a theory of attitude change that states that people strive to maintain a sense of balance – or ‘cognitive consistency’ – in their thoughts, feelings and social relationships.

In the Macmillan case, it would appear that the use of an (ideologically?) “fundamentally unacceptable” form of fundraising did not allow the volunteers to maintain such consistency in how they felt about the charity they supported. A relationship that involved the national charity, volunteer fundraisers and doorstep fundraisers became ‘unbalanced’, and fell apart as a result.

The hypothetical case of Jane and the telephone fundraisers

Heider identified two types of ways that relations between separate parties (or “entities”) could be perceived as fitting together: unit relations and sentiment relations. A unit relation exists where one entity is seen as belonging to or being part of the other, such as members of a family or a person and her beliefs – in the Macmillan case, this was a charity and its supporters or, viewed from a different perspective, a donor and her chosen charity. A sentiment relation exists when two entities are linked because one has expressed a preference, or dislike, for the other. 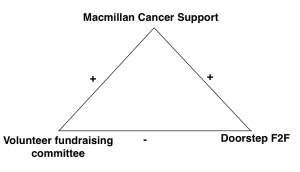 Fig 1) The unbalanced relationships between Macmillan Cancer Support, its local volunteers, and its professional doorstep fundraisers

1) a person and their perceptions – in the Macmillan case, each member of the local fundraising committee

2) some other person or object – Macmillan Cancer Support

Balance theory has been used to explain a number of consumer behaviour phenomena. For example, consumers perceive a pasta dish to be healthier when it is shown on a menu as a ‘salad’ rather than listed under ‘pasta’. Balance theory explains this by suggesting that consumers have negative sentiment relations to ‘pasta’ but positive sentiment relations to ‘salads’ (in the context of a healthy lifestyle). Therefore, the positive sentiment about salads influences how they feel about the pasta dish, even though it is still ‘unhealthy’ pasta.

Can it also be applied to fundraising relationships?

Figs 2b and 2c show two ways this triad can be balanced. In Fig 2b, the triad is balanced because Jane has improved her perception of telephone fundraisers, perhaps because of good PR by the charity or a representative body – well, we can all dream, can’t we?

In Fig 2c, the triad is also balanced because now Jane has developed a negative sentiment to the charity. Because she is both unhappy with the fundraising method and the charity that uses it, Jane therefore no longer suffers cognitive dissonance at liking a charity but not liking the fundraising method they use – now she dislikes both. This is probably the most likely way this triad would become balanced. The upshot of balancing the triad this way is that Jane is now likely to leave the triad altogether – perhaps she will tell the charity not to contact her or she might register with the Fundraising Preference Service; at worst she might cancel her donation altogether (fig 2d).

“The relationship could become balanced because Jane has improved her perception of telephone fundraisers, perhaps because of good PR by the charity or a representative body – well, we can all dream, can’t we?”

In 2012, Macmillan Cancer Support decided not to go down this route in respect of doorstep face-to-face, concluding that the good contributed by doorstep F2F outweighed the disamenity that would result from the dissolution of the relationship with the local committee.

Analysing fundraising relationships using Balance Theory helps us see where and why relationships are failing and what we can do to fix them. However, at least in the hypothetical case of Jane, and probably in the real life case of Macmillan and their local committee, you could level an accusation of ‘so what’? It’s obvious some people don’t like telephone fundraising or F2F, and its also obvious one of the solutions to this is better messaging and communications. How does Balance Theory really tell us anything we didn’t know already?

The role of the relationship fundraiser thus becomes not just enhancing donor experiences through ensuring high levels of donor satisfaction, but of ensuring that donors have balanced relationships with the charities they support.

For example, most mystery shopping exercises carried out in respect of fundraising aim to test customer service by, for example, donating to a charity and recording how quickly and by what method the donors is thanked, (e.g. Bloomerang’s ‘Great $5 Donor Communication Experiment’; or by telephoning a charity to try to make an ad hoc donation and recording how the charity handles this).

Balance Theory suggests an alternative approach to mystery shopping, by identifying the factors that could lead to unbalanced relationships and probing how a charity responds to a complaint about these factors – i.e. testing whether a nonprofit’s response to a complaint is likely to contribute to a rebalancing of the relationship or leave it unbalanced. 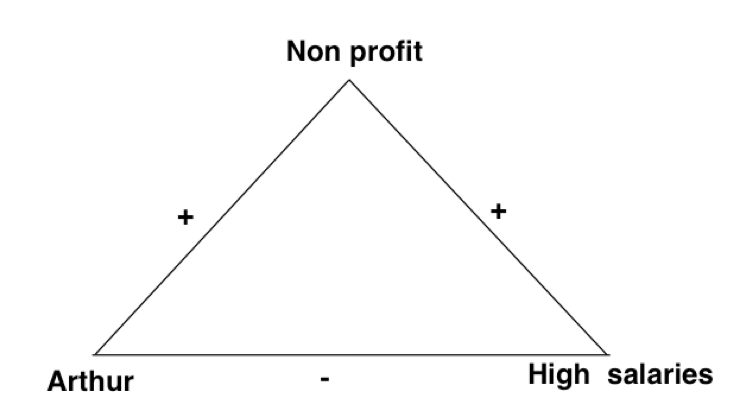 Let’s consider Arthur, who is a satisfied mid-level giver (satisfied not just with the level of customer service he receives from being part of a mid-level donor club, through which he donates £50 a month, but also the use to which that £50 is put). However, Arthur very strongly believes that charities should not pay their staff six-figure salaries, and he has just read in the Telegraph that this charity pays its ceo £150,000 a year. The Arthur-charity-salary triad is an unbalanced relationship (Fig 3).

This is a ‘relationship fundraising’ issue, in the widest sense of the term, because the unbalanced relationship that a donor has with the charity threatens the long-term value of this donor to the charity. So mystery shopping informed by Balance Theory might take the form of a making a dummy complaint about the about the salary level of senior staff, recording how the charity responds, and then present this response along with a couple of alternatives to a focus group of donors to see which would best mollify the complaintant.

“[Relationship Fundraising’s] overriding consideration is to care for and develop that bond [between supporter and nonprofit] and to do nothing that might damage or jeopardize it. Every activity is therefore geared toward making sure donors know they are important, valued and considered, which has the effect of maximizing funds per donor in the long term.”

In that last blog, I asked rhetorically whether “every activity” should refer to everything that a fundraiser does, or everything that a nonprofit does, and if the latter, does that mean that fundraisers should have some kind of responsibility or accountability for every type of relationship that a donor has with a charity, not just the specific relationship channel that ultimately leads to (or doesn’t lead to) a donation.

In the case of Arthur and his antipathy towards high executive salaries, there are two ways this could play out. Either fundraisers (the fundraising function and/or the fundraising department) could assume responsibility for directing or advising how the charity handles its complaints procedures. Or the organisation as a whole could shift culturally to a TFR mindset so that everyone in the organisation is thinking how “every activity” that they carry out will impact on the experience of their donors: everyone who complains about executive salaries is, after all, already a donor or a potential future donor. Establishing such a cultural shift among their peers was something that participants to Rogare’s relationship fundraising review said was urgently needed.

This would mean – as I argued at a CharityComms lunch a few weeks ago – that fundraising must be central to any new charity narrative that’s currently under development by the likes of CharityComms and NCVO.

It also means that TFR can be viewed more through the lens of public relations as:

“The management function that establishes and maintains mutually beneficial relationships between an organization and the publics on whom success or failure depends.”

Balancing Arthur’s relations with the charity he supports and the salaries it pays its staff, and Jane’s relations with the charity she supports and the method of fundraising she doesn’t like, are more than ‘just’ asking for money – they are both about maintaining mutually beneficial relationships between an organisation and two of its stakeholders (though it is always possible that some unbalanced relationships are simply unbalanceable – perhaps that was the case with Macmillan and its volunteer commitee).

The challenge we now face – and one I’ll explore in a later blog – is whether we can use any insights from public relations theory to help embed this cultural change in nonprofit organisations and make such a total relationship fundraising mindset a reality.