NEWS: Fundraising needs to professionalise for the sake of future generations of fundraisers

A new green paper (discussion paper) published today by the fundraising think tank Rogare (at the Hartsook Centre for Sustainable Philanthropy at Plymouth University) argues that fundraising is not a profession when assessed against accepted criteria for establishing professionhood, at least in the English-speaking world. 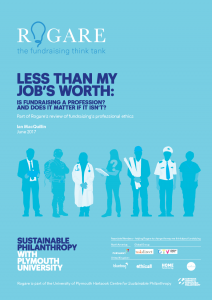 The green paper – Less than my job’s worth: Is fundraising a profession and does it matter if it isn’t? – argues that any such analysis would most likely conclude that fundraising were an ‘emerging profession’ at best, but at worst a trade little different to sales.

The paper, authored by Rogare’s director Ian MacQuillin, argues that some of the areas in which fundraising falls short of professionhood are:

“The problems associated with not being seen as a profession are that fundraisers are treated with a lack of professional respect, and are viewed as employees who are told what to do, rather than specialists whose advice on matters of income generation is sought. There’s even a name they are known by – the ‘necessary evil’.”

Renowned American consultant Simone P. Joyaux says in the foreword to the paper:

“Too often, I’ve seen board members and CEOs insist their own opinions (and power) trump the fundraiser’s knowledge. These same leaders wouldn’t talk that way to an accountant or a brain surgeon…or even a building contractor. This common disrespect harms nonprofits and beneficiaries and our communities. The contempt for fundraising and fundraisers demeans our value and commitment.

“I want to claim the rights of a profession by ensuring that we in the field can define and defend the concept.”

The paper argues that a lack of formal and professional education in fundraising is a cause of many of these ills. For example, about 60 per cent of IoF members do not hold a professional qualification, while 55 per cent of American fundraisers say they are ‘self-taught’. This means that there is no clear career path for people to enter fundraising, during which they learn the theories and practical skills they need.

“With so many people ‘falling into’ fundraising by accident, the duty on current members of the fundraising profession is to professionalise for the benefit of those fundraisers who come after them so that the fundraisers of 2030 have a defined entry route into a recognised profession, and the status, trust and legitimacy that entails.”

A task group of Rogare’s International Advisory Panel – led by Cherian Koshy, director of development at Des Moines Performing Arts in the USA – will now explore the issues raised in the green paper. The task group will:

The new green paper is part of Rogare’s ongoing review of fundraising’s professional ethics. The first output from this review was last year’s white paper, which proposed a new theory of normative fundraising ethics that seeks to balance fundraisers’ duties to their donors with those to their beneficiaries. A decision-making framework based on this white paper will is currently being developed and will be published later this year.

← NEWS: New report series will identify fundraising challenges and issues around the world
OPINION: The case of the accidental fundraiser and the need to professionalise fundraising →