KNOWLEDGE: Space bar – reducing the distance between donors and the fundraising events they attend

People think about things they feel close to in a different way to things they feel apart from. Harriet Day explains how Construal Level Theory can be applied to transform fundraising events by making donors feel psychologically closer to the action.

Everyone loves a nice fundraising event. Not only does it have glitz and glamour but you’re doing good into the bargain. But when you take away the

auction prizes that no one is particularly interested in winning, the polite small talk, and the business cards that are just added to your ever-growing pile, what kind of connection are you actually making with your audience? Are you really succeeding in drawing them loser to your cause, or are you guilty of simply inviting them to yet another fundraising event that will be erased from their memory just as quickly as the next event rolls along in their calendar.

However, there are ways to engage with your audience on a deeper level, and one such concept from the realm of psychology is something that has great potential but is little used or talked about in the fundraising sphere – Construal Level Theory (CLT). This is a concept that Adrian Sargeant and I utilised in the report on fundraising we recently worked on at the Hartsook Centre for Sustainable Philanthropy – Great fundraising events: From experience to transformation – which was funded by US donor management software company Bloomerang and online giving platforms GiveSmart and QGiv.

Two scientists who have specialised in studying CLT, Yaacov Trope of New York University and Tel Aviv University’s Nira Liberman (both pictured left), describe ‘psychological distance’ as “the perception of when an event occurs, where it occurs, to whom it occurs, and whether it occurs”. Essentially, people will have one of two mindsets: abstract (high construal level) or concrete (low construal level).

To put these mindsets in a gift-giving scenario, when people think about the present, they like things to be concrete and contextualised. So, asking people for a one-off donation of a given amount and setting out exactly what this money could achieve would be a good strategy, e.g. please donate £10 today and this can buy a life-saving mosquito net for a child in Sudan. This is an example of a ‘concrete’ appeal.

Alternatively, when people think about future events, they do so in more abstract and decontextualized terms and therefore appreciate the more general effect that their gift will achieve. For example, in donating they would be helping to eradicate child hunger and poverty, or standing up for humanitarian rights across the globe. This is an example of an ‘abstract’ appeal.

Bringing donors close to the event and beneficiaries

Construal Level Theory provides fundraisers with an understanding of how to most effectively appeal to their donors. In understanding how the human brain comprehends psychological distance, fundraisers can ensure they are maximising their chances of creating meaningful and memorable relationships with their audiences.

Simply having volunteers at an event step forward two or three steps towards attendees when they arrive and to greet them in a closer and more intimate manner can reduce psychological distance –  physically reducing the space between people to encourage the reduction of psychological distance.

Another practical application would be to have guest speakers go around the event and introduce themselves to attendees, shake their hand and strike conversations with people. This will give the impression of making people ‘feel closer’ to those running the event and will make the experience more personal and memorable for them. What could be more ineffective than a speaker giving a fantastic speech to their audience but then not taking the time to socialise and circulate with them? You need that interaction to foster an adequate level of intimacy. 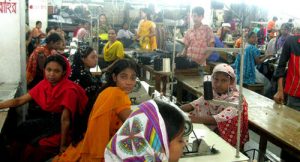 Furthermore, you can utilise visual stimulus to reduce psychological distance. As an example, showing pictures during a presentation, or having pictures placed around the event, of the charity’s beneficiaries and the way their lives have been helped and transformed by donors’ actions will help to make them feel more involved and devoted to the cause. Undoubtedly, there is little that could be more powerful than seeing evidence of the change that your donation is making in reducing the distance between yourself and the subject. Donors can actually feel quite distant from the beneficiary, especially where there is spatial or physical distance, such as when the beneficiary is a sweatshop worker in, say, Bangladesh. The longer you can expose the attendees to such visual stimulus the better­ ­– even 30 seconds of stimulus exposure can be enough to make a lasting impact.

Not only do we want to strike a bond between the speaker and their audience, but also for this bond to extend to their fellow attendees. We want to leverage the social distance experienced at an event and break down these barriers to create closeness between attendees. Those who attend a charity event, we hope, will share similar beliefs and convictions and will be able to forge a relationship with one another using these beliefs as the catalyst.

Conversation cards left on tables can reduce psychological distance and encourage further communication and contact after the event.

But they’ll also have many differences too, differences that can be used to encourage further contact and collaboration after the event has finished. One way to achieve this would quite simply be to encourage conversation at tables. Leave various questions in the middle of the table and challenge each attendee to ask at least one. Ask attendees to put their social media information on a card for others so after the event people can connect digitally; this is a medium that should not and cannot be underestimated in making events truly successful, and their effects enduring. It is about opening the space and making it an atmosphere where strangers, or familiar faces, can connect and get to know one another.

In our events report, we argue that when an event lowers psychological distance, and in turn lowers social distance, donors are more likely to give and to experience positive emotions and enhanced wellbeing. Therefore, it is crucial that fundraisers capitalise on the heightened wellbeing and positive emotions that are experienced so the effects can endure in the days, weeks, months, and even years after the event.

Very simple – and inexpensive – techniques can be used by fundraisers to improve donors’ wellbeing, and these can be found in the digital realm. Events fundraisers ought to be exploiting social media to its fullest and encouraging attendees to post as many photos and share the experiences across as wide a range of social media platforms as possible. Doing so will not only keep the excitement of the event alive, but it will reinforce the emotions they felt at the time. Every time they post a picture or tell a friend about the event, they will relive their experience over and over again 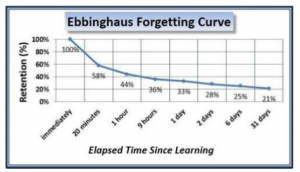 Ebbinghaus’s forgetting curve shows there is a 50 per cent chance of information being forgotten just one hour after it was first acquired.

Thanks to German psychologist Hermann Ebbinghaus, it’s been known for more than a century that due to memory decay, an hour after an event there is a 50 per cent chance that people would have forgotten about it already. This decay continues in the days after the event, so fundraisers need to reignite these memories again for the attendee so they re-live the feelings and emotions that they felt. Sending a follow up email after the event can be immensely effective in reigniting those emotions, as can asking attendees post-event to rate their experience and share this with others. Moreover, priming these thoughts again in the mind of the attendee will increase the likelihood of them saying yes to donating or donating more post-event, and they will feel better in themselves for doing so.

As time passes fundraisers should also be conscious of the way in which they approach donors. As previously mentioned, when people think about an event at a concrete level (i.e. one week after the event) then they focus more on what happened. On the other hand, when people think about an event at an abstract level (i.e. one year after the event), they focus more on why things happened the way they did. So, fundraisers need to be aware of this shift and to approach donors in the optimal way, depending on how much time has passed. This means that in the close run up and shortly after an event a ‘current mindset’ should be used and subsequently the more ‘distant mindset’ will kick in the longer you get following an event where people begin to view their experience in a more abstract and decontextualized way.

It’s easy to let fundraising events get into a bit of a rut. The same event happens at the same time in the same way every year. It’s done every year like that ‘because we’ve always done it this way’.

Yet utilising psychological concepts such as Construal Level Theory need not be cumbersome or costly, and it has many practical and real-world applications that can take a ‘good’ event and make it truly a great and transformational event. The kind of event that people will talk about, support, and remember.

← OPINION: The case of the accidental fundraiser and the need to professionalise fundraising
NEWS: Rogare’s theory of change aims to change ‘copy the case study’ learning culture →