A lack Scotland-specific research and analysis of giving trends and fundraising practice is holding back strategic development of the profession. The conclusion comes form Rogare’s latest Critical Fundraising Report, which is launched today at the AGM of the Institute of Fundraising (Scotland) in Edinburgh.

Most of studies on charitable giving are based on the UK-wide population, even though many studies show that Scots think and act 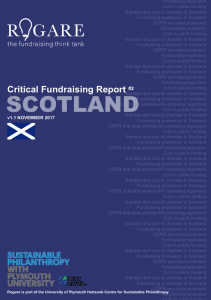 differently to other Britons, particularly regarding charitable giving, where Scots are shown to give more to charities than the other nations in the UK.

The report also highlights the lack of affordable professional development opportunities and therefore a lack of skilled senior fundraisers across the Scottish profession, which leads to difficulty in recruiting and maintaining high standards.

“Umbrella bodies and charities themselves must invest in accessing and producing Scotland-specific research and analysis that enable learning and evidence-based decision making. Additionally, they must strive to provide a comprehensive programme of training and professional development tailored to the Scottish market and accessible to fundraisers of all sizes, stages and locations.”

The Critical Fundraising (Scotland) Report was researched and compiled by a task group of Rogare’s International Advisory Panel, led by Scotland-based consultant Mafe Marwick, who says:

“The aim of this report is to identify and explore the main issues that affect fundraising practice in Scotland, and to offer recommendations to tackle these issues. We hope that the issues and topics developed in the report will resonate with readers, and will be a stepping stone for debate and discussion, and for fundraisers to work together in order to find solutions to the challenges identified.”

Issues identified and developed in the CFR (Scotland) Report are:

In all, the report makes 23 recommendations, including:

MacQuillin says in his introduction to the report:

“For every development in fundraising in these islands, we need a group that feels it has the space to step back and say, hang on, we are not sure this is the right way to do things. And that group may just be in Scotland.”

CFR (National) Reports are part of a series of reports that will be compiled by members of Rogare’s International Advisory Panel over the coming years, which will also include CFR (Method) Reports, looking challenges for types fundraising, such as telephone and major gifts; and CFR (Issues) Reports, which will explore issues such as regulation and ethics.

Critical Fundraising Reports are ‘live’ documents that will be regularly updated as new things appear on the radar and others drop off.

← OPINION: Fundraising and comms integration: count me out – it’s time for Fr-exit ! (Fundraising-Exit!)
OPINION: What do we need to learn from the Presidents Club debacle? →