NEWS: Review of fundraising ethics must precede major changes to the code

A “systematic review” of fundraising’s professional ethics is needed before any major review of the Code of Fundraising Practice in England and Wales is made, a new paper published in the Journal of Business Ethics argues.

Co-authored by Rogare’s director Ian MacQuillin, and the director of the Hartsook Centre for Sustainable Philanthropy Adrian Sargeant, the paper outlines Rogare’s theory of Rights Balancing Fundraising Ethics for the first time in an academic journal. The Rights Balancing ideas were published in a Rogare white paper in September 2016, but the JBE paper now applies this to fundraising regulation and the development of codes of practice.

Rights Balancing Fundraising Ethics states that fundraising is ethical when it:

Balances the duty of fundraisers to ask for support on behalf of their beneficiaries with the relevant rights of donors, such that a mutually optimal outcome is achieved for both groups and neither is significantly disadvantaged.

This contrasts with the other ethical theories identified by the paper that have been advanced over the past 25 years: 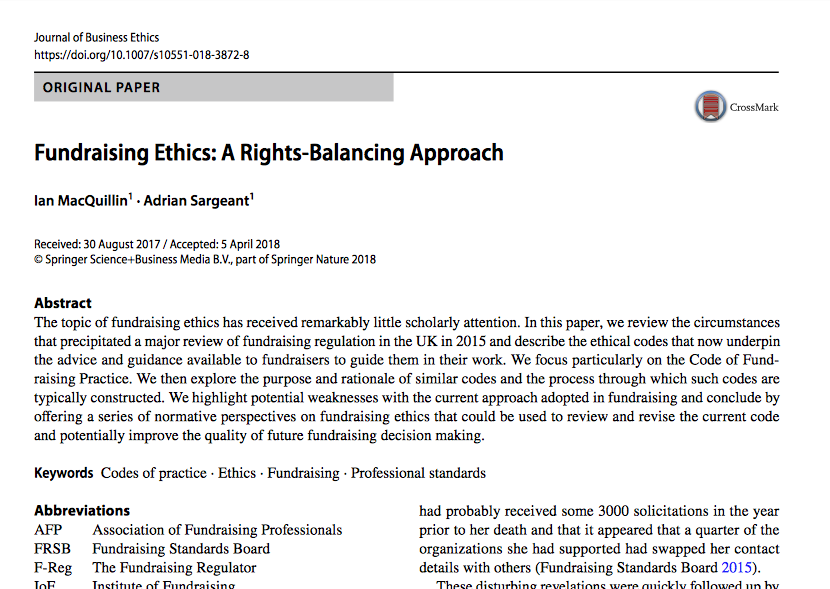 The paper argues that the Fundraising Regulator (F-Reg) in the UK has adopted a “consumer protection” regulatory ethos by stating that its role is to “speak up for donors”, which necessarily encompasses donorcentrist ideas of ethics. For example, the paper refers to focus group research carried out for F-Reg last that revealed what the public thought might constitute “undue” pressure in a fundraising solicitation. But MacQuillin and Sargeant say in the paper:

“Even though this goes some way to identifying what the British public believes constitutes undue pressure, it cannot automatically be inferred that this level of “undueness” is unethical. It would be wrong to assume that the British public is the only voice that should be heard in making that determination.” 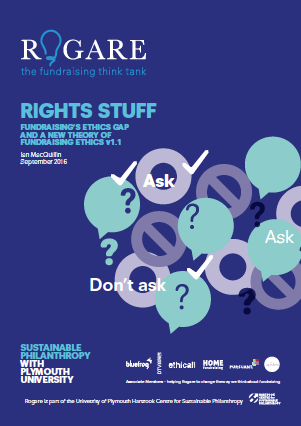 Making this assumption would result in the “very real danger that primacy in ethical decision making will be given to the stakeholder group with the greatest capacity to influence the regulator rather than the full range of stakeholders that should properly be considered in this context”.

The paper’s authors say that this “potential imbalance” is exacerbated now that development of the code in the UK has been vested in the regulator rather than the profession: the code was removed from the Institute of Fundraising in July 2016 following changes in regulation recommend by the Etherington Report.

MacQuillin and Sargeant say that there can be “little doubt” that fundraising needs to clean up its act ethically, but argue against “knee-jerk” adjustments to the code in favour of a “systematic review of the codes and in particular consideration of the underlying ethical frameworks that should be shaping our decision making”,

This means considering how regulation of fundraising might impact on the rights and interests of charity beneficiaries: “Otherwise there is a very real danger that in the rush to protect the interests of one vulnerable group in society we could do grave and permanent harm to another.”

Critical Fundraising blogs on the ethics of fundraising regulation.

← KNOWLEDGE: A deep dive into professional knowledge at AFP I-Con in New Orleans
OPINION: Fundraising regulation owes more than lip service to the rights of beneficiaries →