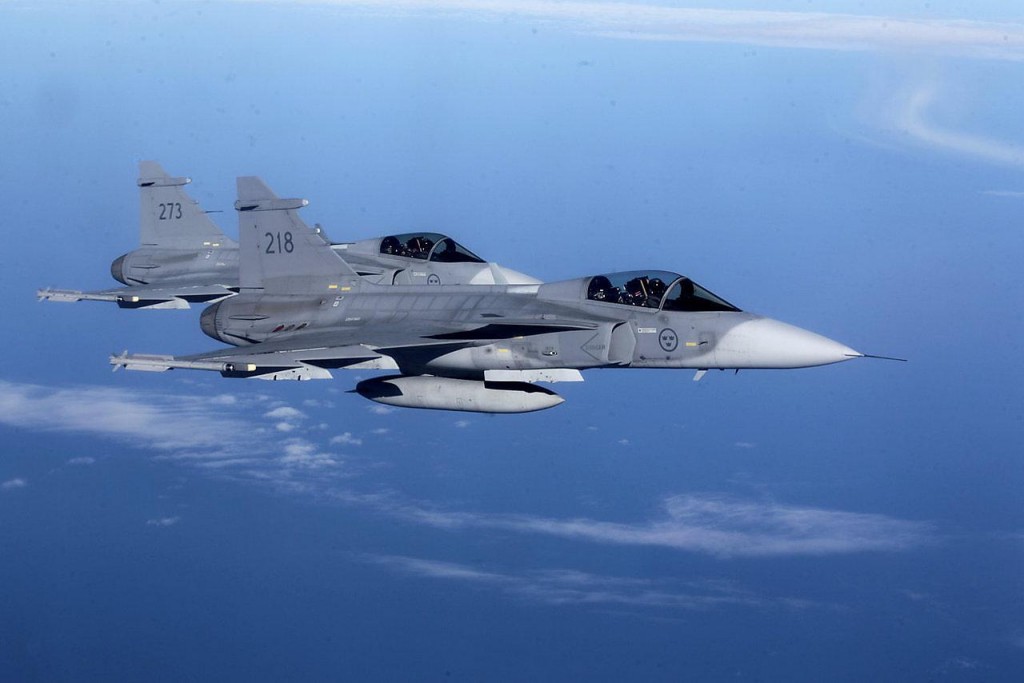 Recent violations of Swedish territorial waters by unknown submarines, as well as aggressive flights by Russian bombers and fighter jets in the airspace of the Baltic Sea sent warring signals to the Swedish government for the first time since the end of the Cold War.

The immediate response of Stockholm to these developments was an increase of the defence budget last March by 696 million dollars for the 2016-2020 period. This money will be spent on the procurement of new helicopters, new anti-submarine warfare equipment and on upgrading two of the four Göteborg-class anti-submarine corvettes.

Further, the Scandinavian country has announced plans to enhance its ties with NATO member states. The first step towards this is the participation of the Swedish Air Force in the multinational airborne Arctic Challenge Exercise.

Altogether more than 100 aircraft such as the F-16 Fighting Falcon, the Mirage 2000, the Eurofighter Typhoon, the JAS 39 Gripen, the Hawk T1, the F/A-18 Hornet, the Tornado GR4, the DA-20 Falcons electronic warfare aircraft and the E-3A Sentry AWACS, are going to participate in the exercise.

The Arctic Challenge Exercise 2015 theatre of operation will be divided among the airspace of the three countries that organize the exercise. The exercise area will extend from the north-east of Norway’s Bodo Air Force base, north-west from Sweden’s Luleå-Kallax Air Force base, up to Finland’s Rovaniemi Air Force base.

A second important exercise that is going to take place next month in the region is the NATO-led marine exercise, Baltops 2015, that will take place from the 5 June to 20 June in the Baltic Sea. This exercise will include a simulation of the dropping of naval mines by two U.S Air Force B-52H Stratofortress, off the coast of Sweden. The two strategic bombers will fly from the U.S to Sweden on 13 June and perform the simulation off the coast of Ravlunda in the south east of the country. After the end of the mission, which is supposed to simulate the defence of the coast when attacked during an amphibious operation, the strategic bombers will return to the US without any stop-overs.

According to Major General Karl Engelbrektson, “The main objective [of the two exercises] is to increase the different operative capabilities, but also to send clear security political signals that we do these things together, with others.”

“Primarily, we want to send a signal about how we understand the mission that the Armed Forces has been given and how Sweden understands its mission. And that is that we will exercise and increase our security together with others. How Russia interprets that, they can decide for themselves.”

The operational area of Baltops 2015 will be in Swedish, Danish, Polish and international waters and in the air space of the Baltic Sea. Altogether seventeen nations will participate in the exercise, bringing together 4,500 troops, 60 surface vessels and boats, about 50 combat aircraft and helicopters, plus a Polish Naval submarine.

← NATO COMPLETES COMPUTER ASSISTED EXERCISE, TRIDENT JAGUAR 2015, WITH THE SUPPORT OF MILTECH HELLAS
AMERICAN DEFENCE ANALYST: “CHINA WILL HAVE 415 WARSHIPS AND SUBMARINES BY 2030” →