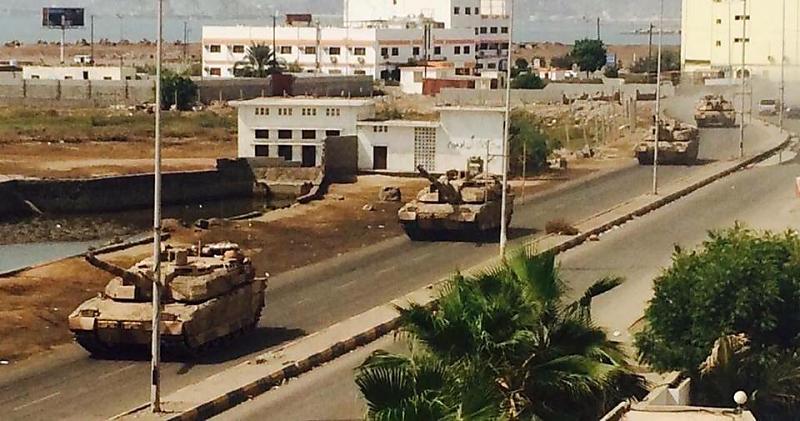 Ground forces of the UAE and Saudi Army, as well as foreign-trained Yemeni fighters landed in Yemen and helped pro-government forces repel the Houthi militia from Aden.

The Arab coalition ground involvement in Yemen was conducted in two phases.

During the first phase, which probably started more actively at the beginning of July 2015, the UAE and Saudi Arabia sent special forces units and light mechanized infantry to Aden, in order to help pro-government forces counter Houthi attacks in Aden, and to regain control of the city and the port.

These light forces, with the support of several mine resistant ambush protected M-ATV vehicles, participated in the battle for the liberation of the International Airport of Aden from forces of the Ansar Allah organization.

During these first battles, the UAE Army had its first loses when a Lieutenant and NCO were killed in action on the 16th and 21st of July respectively. Another NCO was killed in Aden last June, bringing the total number of the UAE Army fatalities in Yemen to three.

The second phase of the UAE and Saudi Army ground intervention in Yemen started this weekend (1-2 August 2015), with the offloading of an entire Armoured Brigade with 2,800 troops. These troops are Emirati and Saudi, as well as Yemenis trained in the UAE.

The equipment of the UAE Army Armoured Brigade was transported to the port of Aden by boats with the flag of the UAE last week, with the first vehicles being unloaded last Saturday.

The equipment of the Armoured Brigade was unloaded within the previous weekend and sent to the frontline north of the city of Aden.

According to photos and videos published on the internet, the foreign boats unloaded in Aden :

Initially these vehicles did not have identification marks showing their origin. Even the plates of the vehicles were removed. But several of them had the flag of the South Yemen state that was used before the unification of South and North Yemen in 1990.

Most recent pictures from Aden show tanks and armored infantry fighting vehicles with plates and probably the number of their military unit.

According to Arab sources this formidable military force assisted the troops of President Abd Rabbu Mansour Hadi in recapturing the airbase of Al-Anad, which is located 60km north of the city of Aden.

The air base was finally captured last Monday, 3rd of August, by pro-government forces with the assistance of Arab coalition ground re-enforcements.

Also, pro-government forces seized control of 10 more villages in Lahj province, and their next target is to advance towards the city of Taiz, where Houthi militia have been locked in combat with local fighters siding with President Abd Rabbu Mansour Hadi.

Finally pro-government forces and the Arab-coalition troops will attempt to clear the provinces of Abyan and Lahj in South Yemen, widening the area they have under their control.