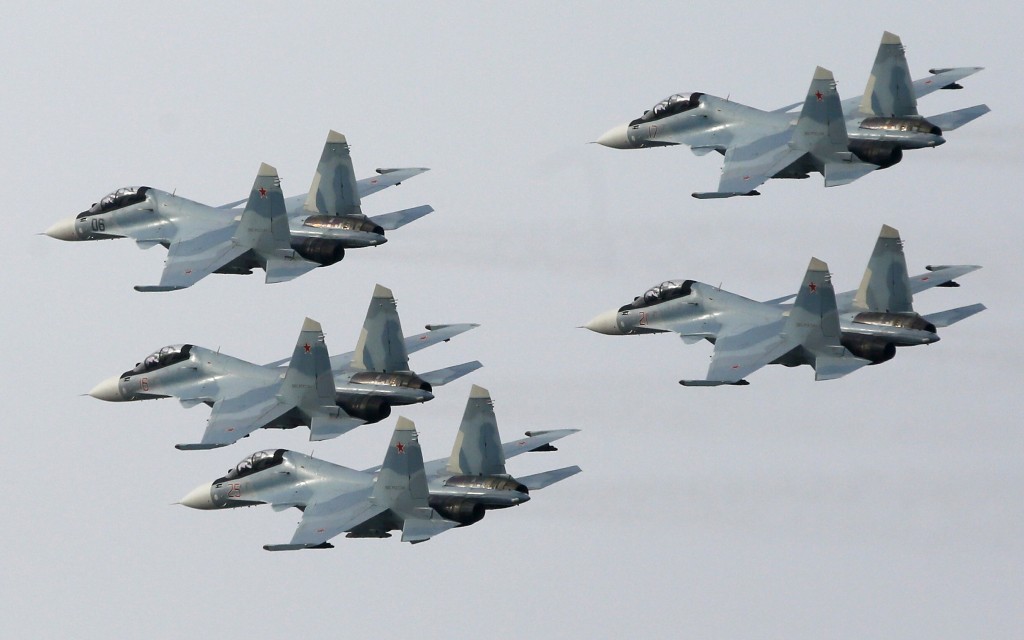 In a surprise move, the Russian Air Force has deployed 28 fighter jets to Syria, which will be used to assist Assad’s forces in the battle against ISIS.

Although the international community knew the Russian Navy has been supplying Assad’s forces with weekly shipments of armaments and equipment, the sudden appearance of four Su-30SM fighter jets at al-Assad International Airport, near Latakia in western Syria, on the 19th of September as well as the subsequent arrival of twelve Su-25SM and twelve SU-24M2 strike jets, took everyone by surprise.

Since last August Russian engineers have been improving the facilities at al-Assad International Airport. New taxiways, helicopter hard stands and surfaces where mobile housing are accommodated, have been built during the last two months.

Satellite pictures show that a battalion sized military unit of the Russian Army has been deployed at the Syrian airport, equipped with six T-90 main battle tanks, several armoured infantry fighting vehicles, such as BTR-82A, and at least six towed artillery pieces.

The appearance of the first Su-30SM in Syria was recorded on the 19th of September, while the 24 Su-25SM and Su-24M2 bombers were spotted on a satellite picture taken on the 21st of September.

The Russian aircraft were used against ISIS targets a few days after their arrival at al-Assad International Airport. A number of Russian Su-24M2 bombers were used against the ISIS forces that have encircled the Syrian Air Force base, Kweiris. This base is located 35km east of the city of Aleppo and it is crucial for the continuation of the military operations of the Syrian Army on the northern front against ISIS, Free Syrian Army troops and forces of the extreme Islamic organization, Jaish Al Islam.

According to Reuters, the crews that operated the Russian bombers were Syrian pilots. The Syrian Arab Air Force has 11 Su-24M2 in its inventory and its pilots are familiar with the aircraft.

Besides the 28 Su-30SM, Su-25SM and Su-24M2, the Russian expeditionary force in Syria has deployed 2 Il-20 SIGINT (Signal Intelligence) aircraft, 12 Mi-24 attack helicoprters and 2 Mi-17 transport helicopters at al-Assad International Airport, while 9 Mi-17 and Ka-27/28 helicopters have been deployed to a helicopter pad next to the Istamo weapons storage facility close to Lattakia. These deployments, as well as those of Russian troops at the Al-Sanobar military complex, a few miles west of the Istamo facility, are the most recent of Russia’s military buildup in Syria.

Although it is not known what number of the troops Russia has deployed in Syria, analysts estimate that almost 2,000 will be based at the al-Assad International Airport, while hundreds of soldiers from the 810th and 336th Marines Brigade are already based at the Russian naval base in Tartus and the port of Latakia.

Unconfirmed reports say that Russian troops have already been deployed on the hill tops overlooking the Ghab plain east of the ports of Latakia and Tartus, and that several of them have participated in battles, helping the Syrian Army against the forces of Jaish Al Islam that controthe region east of the coastal province of Latakia.