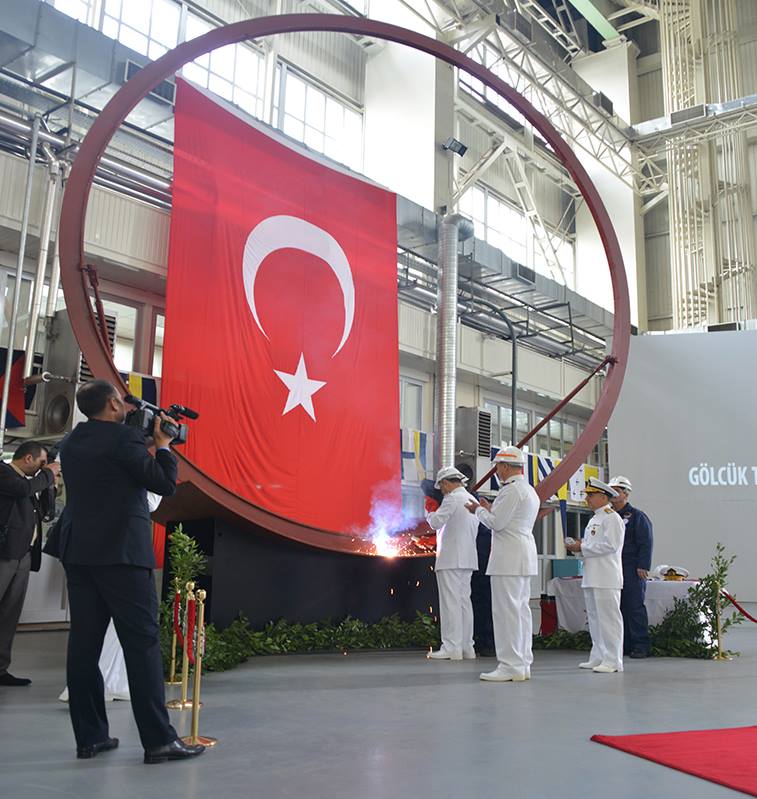 According to the initial plan of the Turkish Navy, the construction of the TCG Piri Reis, the first submarine of the Reis-class, was supposed to start in 2011 and be delivered for operation in 2015. Because of the problems mentioned above the start of construction was postponed from 2011 to 2013 and then to 2015.

In the end, the official ceremony marking the start of construction took place last Friday, on the 9th of October 2015. The TCG Piri Reis is estimated to be delivered to the Turkish Navy in 2021, six years later than was initially planned.

The biggest challenge for the Gölcük Naval Shipyard and HDW will be the integration of the Turkish subsystems that the Turkish Navy has decided to install in the TCG Piri Reis.

According to the local media, the Turkish company, Aselsan, will build and integrate into the TCG Piri Reis, the ESM system ARES-2N, the LPI radar Alper, an integrated telecommunication system, a satellite (X-band) communication system and a thermal imaging camera for the submarine’s periscope.
Furthermore Aselsan has already signed a 95.5 million Euro contract with HDW, for the construction of the electronic subsystems of the six submarines.

Another Turkish company, Milsoft, will develop the Link-11/22 data transfer software for the six submarines at a cost of 17 million Euros, while the British company Ultra Electronics signed a 12.1 million Euro contract with the Turkish company Koç Savuma Sistemleri for the supply of the torpedo countermeasures Sea Crypsis system.

The Sea Crypsis system incorporates Ultra’s proven torpedo detection, classification and localization system, which is an augmented version of the Sea Sentor.

The consoles of the Combat Management System will be built by the Turkish company, Ayesas, while the state research institute, TUBITAK-MAM, will develop the hydrophones, the vessel’s battery control system and the life support system of the submarines.

Another Turkish company, ROKETSAN, in co-operation with ARMERKOM, the research center of the Turkish Navy and TUBITAK-MAM, is developing a new 533mm torpedo called AKYA for the new submarines.
Finally, the state controlled engineering and technical consultant company, STM, will be responsible for the integration of 18,000 subsystems, the design of the batteries of the submarine and the establishment of the logistic support chain for the construction of the six submarines.

The Reis-class submarine will be able to reach 20kt speed submerged, 10kt surfaced, 12kt with the use of the snorkel and 6kt when using the fuel cell AIP system.

The vessel can travel for 12,000 nmi while it is surfaced, 420nmi with 8kt speed when submerged and 1,248nmi with 4kt speed when she is using the AIP system. The operating depth of the Reis-class submarine is estimated to be 400 meters and the endurance of a mission can be up to 12 weeks. The submarine will also have 8 x 533mm torpedo tubes and carry up to 4 UGM-84A harpoon missiles. Its complement will be 5 officers and 22 crew.