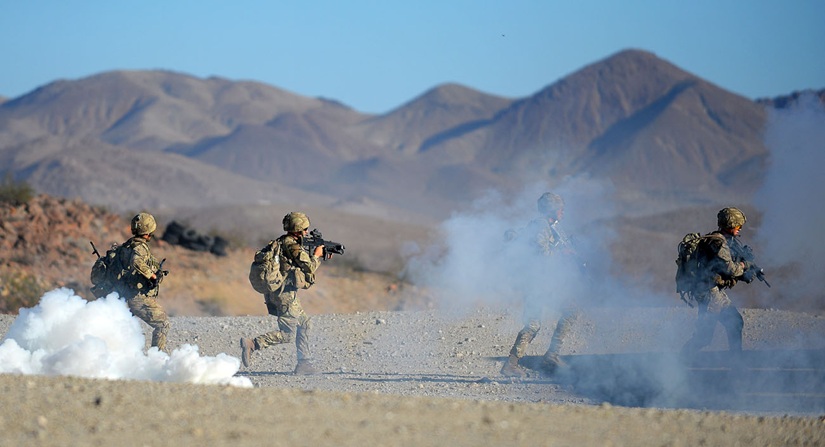 The men of 42 Commando led the way through the mock town in a nine-day battle which brought the curtain down on Exercise Black Alligator, the most action-packed live-firing training Royal Marines get anywhere in the world.

Around 1,200 Royal Marines Commandos, Royal Marines Reservists, commando gunners of 29 Regiment Royal Artillery, battlefield engineers of 24 Commando RE, the wings of the green berets – 845 Naval Air Squadron and their Merlin helicopters – and Dutch and American green berets joined forces at the enormous ranges at Twentynine Palms, roughly half way between Las Vegas and Los Angeles.

The base is home to the Marine Corps Air Ground Combat Center spread across 950 miles of the Mojave Desert.

There troops, armour, artillery and air power are all able to unleash hell with live weaponry, culminating in what they call the Combined And Live Firing EXercise (or CALFEX) which is basically war minus the enemy.
It began in the rocky terrain outside the replica town, with rounds from US Marine Corps Abrams M1 tanks and 105mm shells from the guns of 29 Commando crashing down on ‘enemy’ positions in the hillsides as they were stormed by the men from 42 and 12 Company Royal Netherlands Marines Corps.

Among those unleashing hell was Lance Corporal David Nash of 42’s Juliet Company who put an end to the activities of enemy armour with a Javelin anti-tank missile. 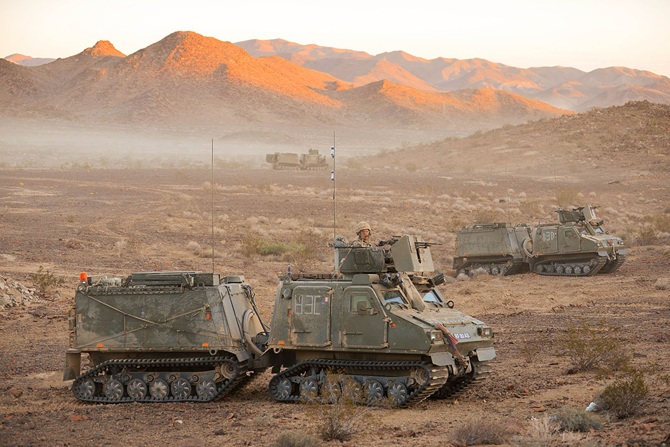 He won the chance to unleash the 40lb missile – which can knock out a tank at ranges up to 2,500 metres – in a game of rock-paper-scissors.

“It was a great privilege to be able to fire the only Javelin on this exercise – it’s such a rare opportunity,” David said.

It’s this ‘money can’t buy’ experience of live firing which, says 42 Commando’s Commanding Officer Lieutenant Colonel Rich Cantrill, is crucial should the men from Bickleigh be sent into battle.

“The experience of feeling the ground shake from the impact of a live 81mm mortar bomb shortly before moving forward on foot to clear the remaining enemy is not a feeling that these marines are able to experience often, but it’s vital that it’s a familiar one when they’re called upon by their country to fight in anger,” he said.
After tearing up the desert, the troops moved into what the US Marines call Range 220, the 1,000-building urban complex.

It features buildings as tall as five storeys, grocery stores (complete with plastic fruit), bookstores, pharmacies, schools, hotels, hospitals and clinics, sports stadia, even a parliament and diplomatic quarter.
The buildings are made of specially-absorbent concrete which can take the hammering it receives from the marines.

All four companies from 42 Commando – Juliet, Kilo, Lima and Mike – plus the Dutch flying in by Chinook helicopters and armour from the Royal Marines’ Vikings and US Amtraks were involved in the two-day ‘battle’ for the town. 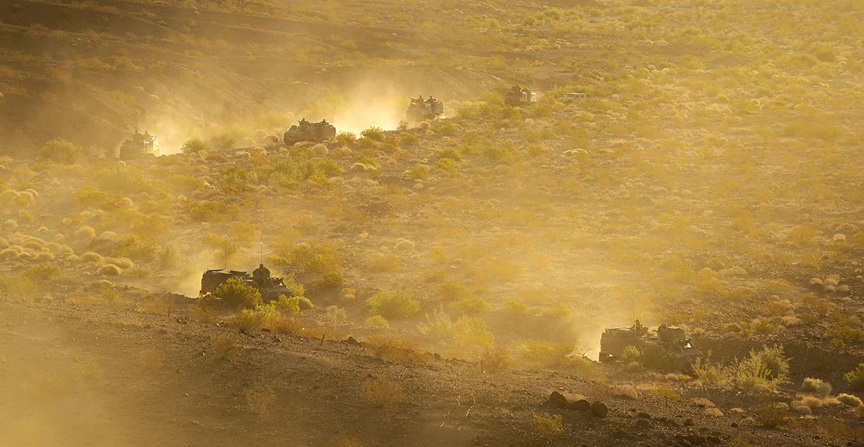 The Vikings carried Juliet Company into action – sparing the men’s legs, providing some armoured protection under fire and extracting wounded comrades, while also pouring down machine-gun fire on the enemy.
“Having never used Viking before, I’m a complete convert,” said WO Noel Connolly, Juliet’s Sargent Major.
“I firmly believe we should be seriously looking at using these machines as much as possible.”

As the sounds of battle from more than 600 personnel involved in the final assault died down, Lt Col Cantrill thanked the Americans for allowing the Brits to ‘play’ on their ultimate training ground.

“We have been so lucky to have been provided with all the range access, infrastructure and attached arms that we have needed, but it is the wrap of goodwill from the US Marine Corps that has made the greatest impression on me,” he said.

“And I am delighted to know that some of my mountain leaders will be returning the favour, in a very small way, by assisting US Marines to train in the high Arctic of Norway in the new year.”