TWO HALVES OF PRINCE OF WALES JOINED TOGETHER 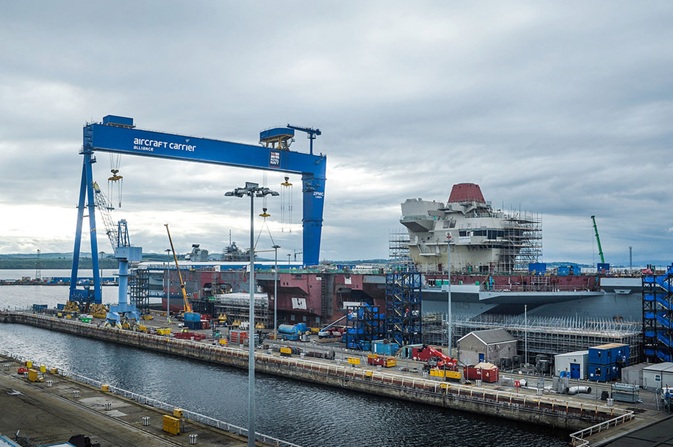 The operation, which is believed to be a UK record in terms of the weight of ship that was skidded, took place in Babcock Rosyth Facilities over 10 hours.

Tom Niven, Build and Assembly Manager for the Aircraft Carrier Alliance (ACA), stated: “While we’ve completed a few of these skidding operations on the QEC Carriers, this is the final operation of its type on the programme and the heaviest section anyone in the UK has had to move.

“It’s always a particularly delicate and precise procedure, demonstrating the high-level of engineering skills we have across the Alliance.”

Angus Holt, HMS Prince of Wales Delivery Director, added: “To see more than 26,000 tonnes of ship skidded in the dry-dock is an amazing sight and a very proud moment for the Alliance.

“The rate at which HMS Prince of Wales is coming together is also very gratifying; with the team doing a superb job in ensuring that we keep to our schedule.

“This will allow us to complete the assembly phase of the build by our target date of next year. It really is the turning point in our build programme.”

Defence Minister Philip Dunne, said: “This is a great moment for the Royal Navy and for our Armed Forces, as our second aircraft carrier HMS Prince of Wales begins to take shape. This is one of the biggest engineering feats of the carrier programme  to date, and the so-called ‘skidding’ of these giant sections is believed to be the largest ever such move in the UK. It is all thanks to the 4,000 people and hundreds of apprentices in Scottish shipyards who have shown such commitment to the Queen Elizabeth Class, supported by £3 billion invested by the MOD in the programme so far.”

MOD’s Director of Ship Acquisition, Rear Admiral Henry Parker, said: “This is a significant step in the assembly of HMS Prince of Wales and is the culmination of a lot of hard work on the Clyde where LB04 was built and in Rosyth where the ship is being assembled.

“When the 26,500 tonne forward units were ‘skidded’ with the 11,200 tonne block, it was the largest movement of its kind ever undertaken in the UK.”

The next stage of the assembly will be to weld the two sections of the ship together, which will then allow all of the pipework and the 3.2 million metres of electrical cable to be connected by the outfitting teams, ahead of commissioning.

The aircraft carriers HMS Queen Elizabeth and HMS Prince of Wales are being delivered by the Aircraft Carrier Alliance, a partnering relationship between BAE Systems, Thales UK, Babcock and the Ministry of Defence.

The Queen Elizabeth Class will be the centrepiece of Britain’s defence capability for the 21st century. Each 65,000-tonne aircraft carrier will provide the armed forces with a four-acre military operating base, which can travel up to 500 miles per day to be deployed anywhere around the world.

Operating the Joint Strike Fighter Lightning II jets and a number of types of helicopter, the QE Class will be versatile enough to be used across the full spectrum of military activity from warfighting to providing humanitarian aid and disaster relief.