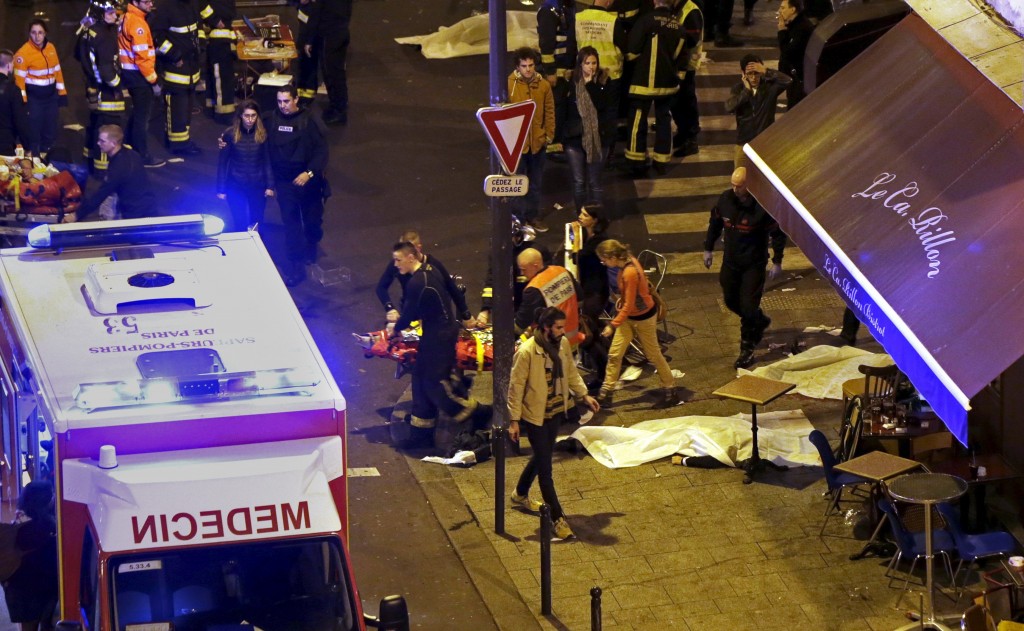 Friday’s multiple terrorist attacks in Paris marked the beginning of a new phase in ISIS’ military and terror campaign. This time ISIS managed to move its war into the heart of Europe.

According to the available information eight to nine terrorists organized into three groups, attacked seven different targets in Paris within 33 minutes.

The first attack occurred outside the Stade de France at 21:20. A suicide bomber detonated the explosives he was carrying, killing one bystander. At the time a football match between France and Germany with 80,000 spectators was in progress inside the stadium.

At 21:25, five minutes after the first explosion, masked attackers (probably two) shot at clients in the “Le Carillon” bar and the “Petit Cambodge” restaurant with AK-47 rifles. They killed 15 people and severely injured 10 more. Eyewitness said to the French Police that one of the terrorists shouted “Allahu Akbar”. The terrorists arrived at their targets in a black Seat car with a Belgian number plate.

Five minutes later, at 21:30, another terrorist detonated a bomb outside the Stade de France, killing himself. Then a few minutes later the French President, Francois Hollande, and the German Minister of Foreign Affairs, Frank-Walter Steinmeier, were evacuated safely from the Stadium.

At 21:32 one of the terrorists opened fire in front of the bar “A La Bonne Biere” killing five people and severely injuring eight.

Then just four minutes later, at 21:36, two terrorists open fire outside the restaurant “La Belle Equipe”, killing 18 people and severly injuring 9 more. In both attacks the terrorists arrived at the scene in the black Seat.

At 21:40 a suicide bomber detonated the bomb he was carrying inside the “Le Comptoir Voltaire” restaurant injuring 15 people, one of them severely. The bomber used a similar devise to that used by the bombers at the stadium.

At the same time, another team of three terrorists arrived at the Bataclan concert hall in one black VW Polo car and killed 89 people.

Later it was discovered that both the black Seat and the VW Polo were rented in Belgium.
At 21:53 the last attack took place at the Stade de France, when a suicide bomber on the third row detonated the devise he was carrying.

At 24:20 French Police Special Forces managed to kill one of the terrorists in Bataclan concert hall during the operation to free the hostages. The other two terrorists detonated their devices and were killed.

According to the official announcement of the French authorities, by Sunday evening there had been 129 fatalities, 352 injured, with 99 of them in a critical condition.

The Belgium authorities arrested seven people in Molenbeek, a suburb of Brussels well known save heaven for extremist Muslim terrorists. Among them was the brother of Abdelslam Salah, but not all of those arrested were involved in the Paris attacks.

According to the French authorities the mastermind of the Paris attacks is the Belgian Abdel Hamid Abaaoud who had fought for ISIS in Syria. Since Saturday the Belgian Police is conducting continuous operations in Molenbeek, trying to find ISIS related terrorists.

ISIS officially claimed responsibility for the attacks on Saturday, releasing a statement in French and Arabic.
According to the Associated Press, Iraqi officials had warned France of a potential attack by ISIS militants a day before the massacre, but they did not have specific details on when or where the attack would take place.
The attack was organized in Al-Raqqah in Syria, the Islamic State’s de-facto capital under the direct command of ISIS leader Abu Bakr al-Baghdadi. The Iraqi officials said that a sleeper cell in France was activated, then it met with the attackers and helped them to execute the plan.

According to the Iraqi officials there were 24 people involved in the operation, 19 attackers and five others in charge of logistics and planning.

France’s President Francois Hollande called the attackers a “terrorist army” and on Saturday said that the attacks in Paris were an act of war against France. According to President Hollande the attacks were organized and prepared abroad and conducted with the assistant of local accomplices.

President Hollande ordered an increase in security at the French borders, declared a state of emergency in France for at least 12 days and decided to deploy 10,000 troops throughout France to supplement the 7,000 that had been deployed since the Charlie Hebdo attacks in January. In Paris, the French Armed Forces have deployed 1,500 troops already and this number will rise to more than 5,000 by Tuesday.

The first military reaction of France to the Paris attacks was the launch of an air raid that involve 10 Rafale fighters and Mirage 2000D/N fighter jets, as well as Boeing E-3 Sentry AEW&C aircraft and a Boeing C-135FR Stratotanker aerial refueling tanker. The fighter jets dropped 20 bombs on ISIS targets in Al-Raqqah.

The planes left from Jordan and the United Arab Emirates and the strikes were conducted in coordination with U.S. forces. Furthermore the French aircraft carrier, Charles De Gaulle (R91) will depart from the port of Toulon in two days for the Middle East carrying 12 Rafale M fighter jets and 9 Super Etendard bombers.

In the UAE, at the at the BA104 Al Dhafra Air Base, they have deployed 6 Rafale fighter jets, 1 Atlantique, 2 maritime patrol aircraft, 1 E-3 Sentry AEW&C aircraft and 1 C-135FR Stratotanker aerial refueling tanker.

With the arrival of the Charles De Gaulle (R91) aircraft carrier France will have 12 Rafale fighter jets, 6 Mirage 2000D/N bombers, and 9 Super Etendard bombers in the Middle East. These will be able to attack ISIS targets 24h a day.