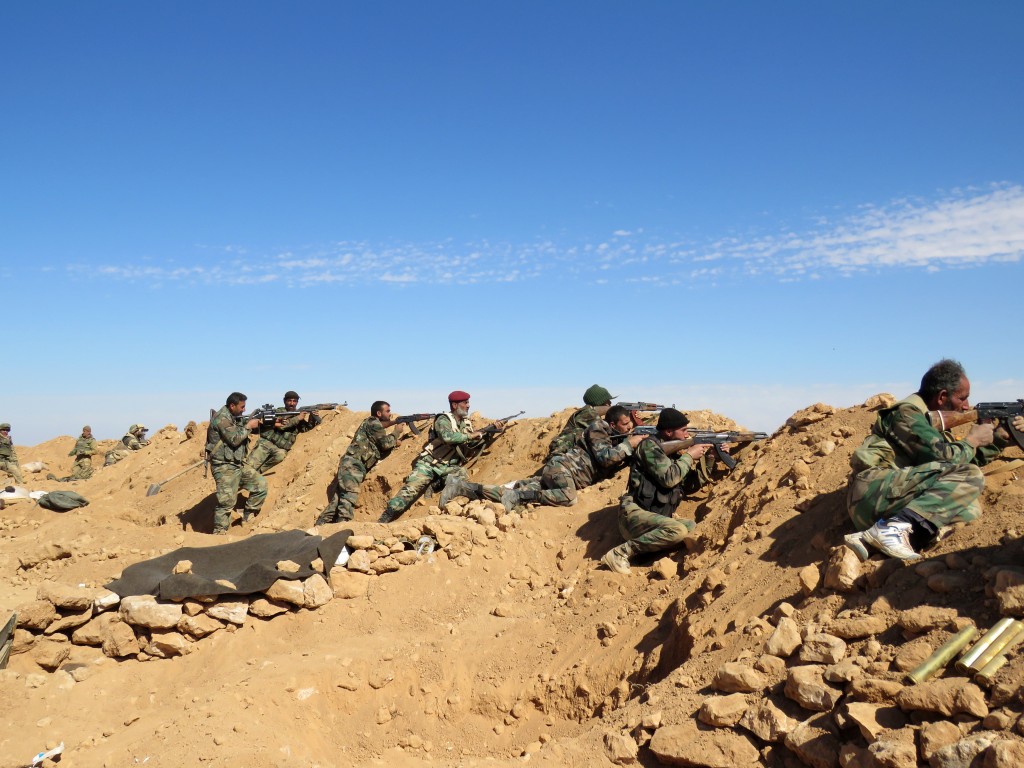 Syrian troops reached the edge of the northern province of Al-Raqqah on Saturday, home to the de facto capital of the Islamic State group’s self-styled caliphate, in a push that leaves the extremists fighting fierce battles on four fronts in Syria and neighboring Iraq.

ISIS, which controls large swaths of territory in both countries, is fighting Syrian troops, U.S.-backed fighters and opposition militants in northern Syria and is facing an offensive by Iraqi government forces on their stronghold of Fallujah.

The Syrian government has had no presence in Al-Raqqah since August 2014, when ISIS captured the Tabqa air base and killed scores of government soldiers. The provincial capital, Raqqa, became the militants’ first city.

The Britain-based Syrian Observatory for Human Rights said Syrian troops reached the “administrative border” of Raqqa province under the cover of Russian airstrikes. It said that during three days of fighting 26 IS fighters and nine troops and pro-government gunmen were killed.

The media arm of Lebanon’s Hezbollah group, which is fighting alongside government forces, said Syrian troops reached the border of Al-Raqqah province after advancing about six kilometers (4 miles) on Saturday afternoon.

The front line is around 80 kilometers (50 miles) from the city of Al-Raqqah.

Syrian troops began their advance toward the province Wednesday, the same day that U.S.-backed forces launched an attack on the ISIS-stronghold of Manbij, some 115 kilometers (72 miles) to the northwest of Al-Raqqah. It is unclear if the attacks were coordinated.

The U.S.-backed predominantly Kurdish Syria Democratic Forces advanced closer to Manbij, which lies on a key supply route linking the Turkish border to the city of Al-Raqqah, Saturday.

The Observatory said SDF fighters had captured 34 villages near Manbij. Another activist group, the Local Coordination Committees, said the fighting is now concentrated on the south of the town.

ISIS fighters are also engaged in fierce battles for the rebel-held stronghold of Marea, a town some 70 kilometers west of Manbij. ISIS has surrounded Marea on three sides but has failed to capture the city, which is under control of rebels and fighters from the al-Qaida affiliated Nusra Front.

“The fighting is very intense on three fronts in Marea,” said opposition activist Baraa al-Halaby, who is based in northern Syria.

While battles rage in Al-Raqqah province, Manbij and Marea, ISIS fighters are also coming under fire in their Iraqi stronghold of Fallujah. Iraqi forces launched their offensive on the city almost two weeks ago, and say they have reached the edge of town.

On the city’s northern edge, Iraq’s military issued a statement announcing that ISIS had been pushed out of the neighborhood of Saqlawiya, Saturday. The statement also said an Iraqi flag had been raised above the area.

However the main push into the city center has been slow. Heavy ISIS counterattacks and concerns for the tens of thousands of civilians trapped inside the city have slowed Iraq’s elite counterterrorism troops, who are leading the push, according to Iraqi Prime Minister Haider al-Abadi.

Meanwhile, violence in and around the contested northern city of Aleppo, Syria’s largest and once commercial center, claimed more lives Saturday. The city has been the scene of fierce fighting, even during a truce brokered by the U.S. and Russia that went into effect in late February and collapsed weeks later.

The Russian military’s Reconciliation Center in Syria said in a statement that the Nusra Front heavily shelled several government-held neighborhoods of the city.

Intense fighting also took place south of Aleppo, where insurgents led by the Nusra Front attacked Syrian army position near the Khan Touman area, according to the Observatory and the activist, al-Halaby.

“The aim of the attack south of Aleppo is to reduce pressure on the city” by government forces, al-Halaby said.