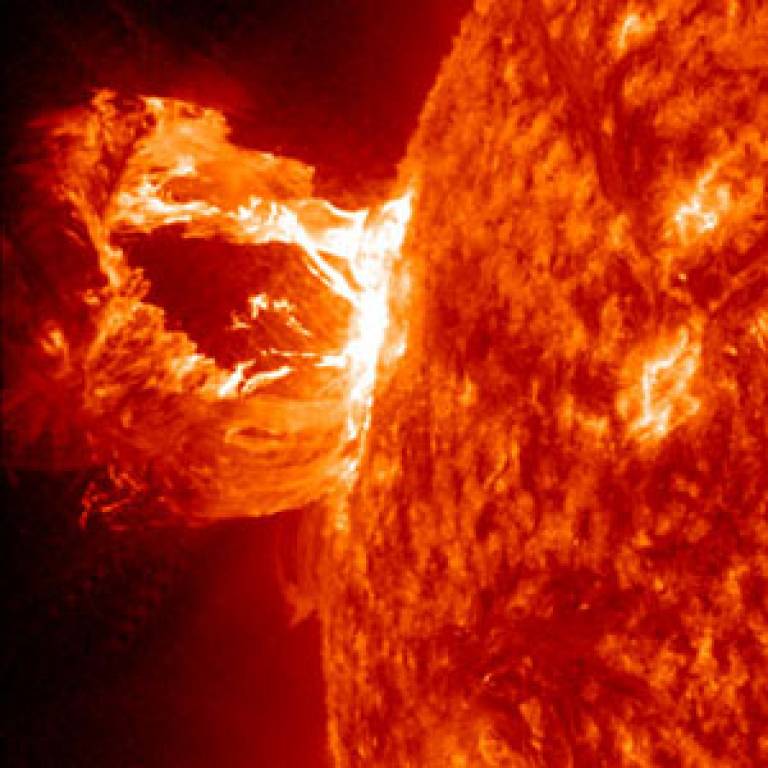 The United Kingdom military is taking the threat posed by space weather extremely seriously. The up and coming “Military Space Situational Awareness Conference 2020”, in London (UK), 29-30 April, organised by the MOD and the Air and Space Power Association, will consider how best to tackle the various threats including space weather, in anticipation of increased space domain use by military and civilian space launchers, such as SpaceX. The digital revolution in global communications and sensing capabilities for those at sea, now provides tools to marine engineers, unimagined a few decades ago. However, maritime users, more reliant on such electromagnetic devices and systems, are also vulnerable to their failure.

This problem is well understood by marine engineers, often far from land, with potential failure of vital on-board systems for crew and passengers, but is one risk only recently appreciated more widely. We now rely on a multitude of global systems, more than obvious maritime systems such as ECDIS and GPS on land, sea, air, and space, which are vulnerable to both military activity e.g. Electro Magnetic Pulse (EMP), or solar weather.

Solar weather can in its severest form, and if unprepared, remove much of the essential electrical infrastructure painstakingly pioneered by engineers like Faraday and Tesla, in a few hours. Marine and terrestrial engineers consider carefully the implications of the historic 1859 “Carrington Event”, a severe solar storm at the infancy of modern electrical devices, which resulted in global communications disruption, even electrocuting telegraphy operators of the Victorian internet.

A modern storm of similar magnitude or greater, could unleash an electromagnetic tsunami wave of unparalleled calamity, ripping apart the electronic fabric of our global community: our terrestrial networks, and space-based infrastructure.

A game of risk

The sun is unpredictable; from time to time it releases vast amounts of energy as solar flares, or Coronal Mass Ejections (CME). These start as a blast of high energy radiation, followed a day or so later by a burst of charged particles (plasma), arriving at the fringes of earth’s atmosphere. When a CME arrives, it interacts with earth’s magnetic field, generating massive ionospheric currents, or induced ground currents, disabling terrestrial grid systems. Scientists cannot predict with certainty when such activity will hit the Earth, but space forecasters at the US National Oceanic and Atmospheric Administration estimate that solar storm activity will increase over the next few years. However, there is no way of inferring a storm’s magnetic field polarity, which means forecasters of past storm severity were often wrong.

The European Space Agency (ESA) fears the world is unprepared for when the next major solar storm will strike. ESA recently discussed the dangers of space weather at a European Union Council meeting in Seville, Spain, in November 2019. According to ESA, solar storms jeopardise satellite operations, and technologies that rely on them. On the ground, ships, cars and mobile devices (SatNav) can lose contact with GPS satellites. Radio frequencies may be disrupted for long periods, cutting off emergency services in remote areas. Power systems can overload and suffer power outages or blackouts lasting weeks. ESA says “In Europe’s economy today, numerous sectors can be affected by space weather. One significant influence of solar activity is seen in disturbances in satellite navigation services, like Galileo, due to space weather effects on the upper atmosphere. This, in turn, can affect aviation, road transport, shipping and any other activities that depend on precise positioning.” Protective measures against space weather are increasingly vital to ESA and the maritime community, reliant on a fragile global network of electromagnetic devices.

Naval vessels are highly dependent on cyber-physical systems, and all vessels are less tightly protected and regulated than shore-based facilities. On modern vessels, the number of control systems makes it difficult to defend entirely against space weather. Navigation systems and control systems are especially vulnerable to solar weather and electromagnetic pulse: Electronic Chart Display and Information Systems, GNSS and GPS system data provided by satellites for navigation and timing, feeding the ocean-going Automatic Identification System (AIS), compasses, Global Maritime Distress and Safety System (GMDSS), as well as other advanced sensing and telecommunications systems. In the decade since the last peak in solar cycle activity we have experienced unprecedented growth in satellite communications for TV, phone conversations, and other applications. A severe solar storm could plunge our modern high-tech civilisation into chaos for a prolonged period unless sufficient warning or alternative arrangements are made.

Space weather risks are not science-fiction. In March 1989 the fiercest sun storm for 30 years struck Canada and the North Eastern United States, already gripped by icy weather. Within the Quebec power grid, resting on underlying poorly conducting granite, voltage levels fluctuated dramatically generating excess current. Within seconds lights across the entire province tripped out in sequence, throwing 6 million people into darkness, leaving some without electricity for weeks, way below zero, and shutting the Montreal metro. Imagine a future without electricity, impacting shore facilities, no internet, nor power systems operating. In isolated communities, such solar storms could prove devastating.

There may be disruption of MF and HF radio bands, and increased visible aurora. When magnetic storms hit earth, power conductor networks act like a giant dynamo. Power lines, telephone lines, and even railway lines are all conduits for induced currents of hundreds of amperes. Power companies are at risk as power lines guide power to sensitive transformer components, which in 1989 caused the HydroQuebec grid to blow spectacularly. Geomagnetic storms pose special problems for space-based systems, such as GPS accuracy, which allow people to fix their position at sea by comparing reception of several satellites’ signals. When atmospheric transmission properties change unexpectedly during storms, navigation fixes become inaccurate, and for short periods satellite signals can be lost completely. Space Environment forecasters at the US National Oceanic and Atmospheric Administration predict increasing solar storm numbers over the next few years.

By counting sunspots and sunspot groups, an index of solar activity, known as the International Sunspot Number, is determined. During the 1989 solar storm it peaked over 150, compared with a current complete lack of sunspots.  Concern is not so much for radiation hardened US Department of Defence satellites, but performance of millions of civilian GPS receivers, accounting for a large share of a multibillion dollar industry which is estimated USD 3.096B by 2020. Much has changed since Magellan introduced the first hand-held GPS receiver for $3.5k in 1998, with GPS receivers now below £10 and weighing under 20 grams.

Impact of solar flares include: satellite command up-link and data downlink disruption, with irregularities in radio signal amplitude, phase and polarisation on passing through the ionosphere, which is most severe between sunset and midnight during intense activity. Links with communications satellites in geosynchronous orbit are very vulnerable to intermittent signal loss or scintillation. During the Gulf War, scintillations were initially thought to be enemy jamming. Even when the sun is relatively placid, as in 1994-1995, some 150 satellite malfunctions occurred annually. NASA and USAF spacecraft failure studies are known to relate to interactions with the space environment.

When communications satellite Galaxy 4 failed in May 1998, several networks crashed, with 45 million pagers put out of action. Rapid GPS growth since the last high activity period will make geomagnetic storm effects more widely felt. Civilian users should expect to suffer from solar activity more than the military. The latter use multiple frequencies which permit return comparisons and GPS signal calibration for ionospheric errors.

However, hardened Milstar communications satellites may still require reboots in bad storms. In March 1989 the same storm which shutdown the Quebec grid, also made GPS signals untrackable for long periods, even surveyors using dual-frequencies were affected in Southern California. In 1994 the Ottawa TV satellite operator Telesat’s lost their E1 satellite, taking 4 hours to recover it. When they had it back under control a more serious failure of their E2 satellite occurred. Aircraft were grounded and significant disruption of Canadian telecommunications networks resulted. It took controllers 6 months to get the satellite back under control.

Failure of either satellite could have resulted in losses of hundreds of millions of dollars. According to USAF, rogue electric currents commanded the satellites to turn their solar panels away from the sun. E1s back-up system prevailed but E2s batteries drained flat, and floated out of control for 6 months, until its orbit brought solar panels back into sunlight. This wasn’t the first time satellite operations were badly affected by space weather. In 1989 the GOES-7 weather satellite lost half its solar cells to a proton storm, cutting spacecraft lifespan by 50%.

In 2003 one storm caused a one hour outage in Sweden, loss of a £640 million dollar Japanese satellite, and the rerouting of aircraft in flight. In the UK compass North changed by 5 degrees in just 6 minutes, hardly trivial. Energy from magnetic storms and dramatic also increases the Extreme UV which can disrupt satellite orbits.

The key to accurate space weather prediction is understanding the sun-earth interplanetary connection using satellites in space. When a solar wind strikes earth’s protective shield, the magnetosphere deflects the solar wind, compressing on the sunward side, whilst extending far out into the sheltered night side. Solar plasma leaks into the magnetosphere, so charged particles accelerate inside the magnetosphere along earth’s magnetic field lines. Like a moth to a flame, particles are drawn towards the magnetic poles, colliding with atmospheric molecules, creating the terrestrial auroras.

Measuring charged particles in space can provide crucial warning time to satellite operators, aircraft avionics aloft, ships at sea, and terrestrial power grids. The 1995 launch of the Solar Heliospheric Observatory allowed first warning from its zero gravity L1 Lagrange point, where solar gravitational attraction cancels the earth-moon attraction; in 1997 the Advanced Composition Explored ACE, gave about 1 hour’s warning. However, satellites like ACE are vulnerable to space weather, like a wind anemometer, which may be destroyed by terrestrial storms. Success of the second ESA Cluster mission added much understanding of Polar magnetospheric interactions, followed by ESA’s STEREO (Solar TErrestrial RElations Observatory) launched in 2006.

The main protection currently is increasing warning time to shut down all but essential satellite systems, and to turn sensitive antenna away from the greatest storm intensity. Satellite swarms may provide some protection against sudden catastrophic system loss, or increasing multiple network reliant GPS (e.g. Navstar, Glonass, with Galileo), but innovative alternatives are needed. Military to civilian transfer solutions for hardening satellites against EMP are welcomed, as is use of chips or solar panel materials which suffer less damage to radiation and charged particles. With the next solar maximum approaching in 2025, we will soon find out how effective such military and civilian mitigation methods will be.

Christopher Lavers is a Lecturer in Marine Engineering, and has taught Maritime and Remote Sensing topics at the University of Plymouth at Britannia Royal Naval College since 1993. He has published 200 articles on technical subjects and a dozen science-art exhibitions since 1988, as well as two books, with others forthcoming. He is a member of the Institute of Physics Environmental Physics Committee, and Convenor of the Special Interest Group in Conservation and Indigenous Communities of the Remote Sensing and Photogrammetry Society. He is Subject Matter Expert (Radar and Telecommunications) at Britannia Royal Naval College.

He has spoken on Radio 4’s Material World programme, Radio Devon and Plymouth Sound radio several times. He is husband to Anne, a father to five, and a grandfather to boot.