Putting the final touches to the IVT project

After all of the characters had been developed and animated, the final tweaks to the IVT project could be made.

These final changes were designed to help add realism to the film, with subtle touches such as making the characters blink and interact with each other more naturally. It was also necessary to tidy up the lip syncing for the characters in a few scenes to make it look a lot more realistic. To create the lip syncing animations originally, we used a Microsoft Kinect and software called Brekel Pro Face, which allowed us the capture the voice actors facial movements whilst they recorded their lines, and apply these to the 3D character models.

Capturing and applying facial animations to Daisy the Dentist

Towards the end of the project, I was able to go back to these original animations, smooth out the keyframes and exaggerate/ lessen movements where required to really help the children viewing the film to believe that it was the characters talking. Positioning the audio in the final scene within Unity so that it came from the 3D models also adds to this effect.

Other final tweaks such as editing the lighting and camera positioning within the scenes added to the overall feel of quality for the film as well, but were made more challenging by the use of a “fish-eye” camera needed to make the film curve for the dome screen, so constant trips down to the IVT were necessary to ensure that changes that worked in our office worked in the theatre! 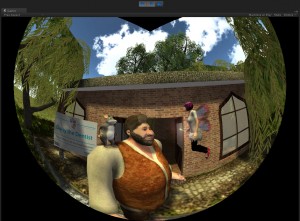