It was interesting to see how they bought a whole new gaming perspective to our usual methods of designing and implementing eLearning, and how we learned to compromise our approaches to create a simulation module that involved all the good pedagogical principles of eLearning, with the immersion and engagement of gaming.

We used a game engine to develop our project, Unity 3D, which we have already used in past eLearning projects such as the Open Wide Step Inside project for the Immersive Vision Theatre. This means that behind the scenes, our module is set up more as a game than a traditional eLearning resource, with the use of levels. However, rather than a score-based system you would usually find in games, in our module we have given this less emphasis, partly to shift the focus onto the learning rather than the competition, but also because our target user-base in Liberia have very little experience of computer games, so what is intuitive to us is not necessarily so to them. Instead of scoring, we kept track of performance for use in Learning Analytics.

A feature we have added to the module that would be familiar to both game and eLearning developers is the progress bar. We felt it important to show how far through the module you are at any given time, and the use of a bar was able to provide this visually, rather than textually, for the less literate users in our target group. 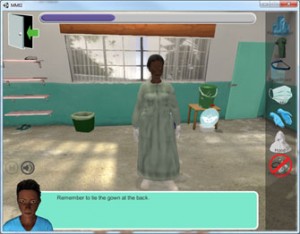 The most game-based section of the module is the Hazard Section. Here we experimented with both third and first-person views of the scene, so that we can gather research to see which view our Liberian users find the most intuitive for the next iteration. We incorporate tradition gaming techniques such as racing against a clock (to spot a hazard before it finishes) and random ‘spawning’ of the hazards, so they are not in the same positions every time you play through, to test the extent of the users learning.

Whilst the positive effects of Game-based Learning have been shown in western markets (see Rob’s post here ) It will be interesting to see how well it is received and how well the module works for audiences in Africa who have little to no previous experience of computer games and traditional gaming techniques.