We (TELMeD) have explored, developed and blogged about various gamification and GBL (Game Based Learning) projects recently and its probably the most challenging and fun part of the job (at least from my point of view!). But if your a newcomer reading this… what is gamification? To quote from a Lynda course I watched to brush up my own knowledge on the subject: Gamification is “the process of applying game elements, game mechanics, and game thinking to non game situations”. It is becoming more and more widely used and adopted in basic to advanced eLearning packages. This blog is not going to tell you to include gamification in everything you make for learners, but explore and provide reasons and examples as to why and when is best to use it. Generally gamification is most useful for advanced and or hard to grasp concepts as learners are more likely to later recall information by doing rather than reading or listening without any meaningful interaction.

Content gamification: This is generally the category that most games fall under. Its dynamic in that the user is free to explore various content through the use of game elements and mechanics.

Structural gamification: For content that is more light and not based around a larger case of information such as utilised by content gamification. An example for this method would be to provide the learner a daily quiz via an app or email. And they simply get some points or a certificate to show for their progress and successes at set milestones.

Areas to consider for gamification

Think of what scaffolding achieves when building houses as an example. When does the scaffolding get removed? When the builders or the building no longer require support and can continue working without it. Scaffolding is often applied to games. Usually when you begin playing a game, you are provided with help and certain buttons / actions animate / glow etc to provide a hint to the user as to what to do next. After a while all these hints get removed and it can be assumed the player understands enough to continue without support.

Its still a good idea to allow the scaffolding to be re-applied if the user has not engaged with the game for a while and has forgotten or if there’s a new user continuing from someone else’s saved game. For more information about Scaffolding, check out this journal or this blog post for lighter reading.

Measurement achievement is definitely the more powerful way for the learner to feel accomplishment as well as to enhance replayability. By providing achievements for how well they complete a task (such as a grade or percentage), the learner will be in a better position to understand where they are at with the content they just learnt. It could be measured on difficulty of the task of time taken to complete it. Whereas a completion achievement is for simply completing a task, no matter the difficulty. Such as doing an action like sharing content with a friend.

When coming up with an idea for a game its good to be brave in your approach. Don’t be afraid to add fantasy or juxtapose things into a game. Adding fantasy characters / gaming elements can help the learner grasp the content in a less formal way, and allows them to feel more at ease with just playing the game as is. They are more likely to question some of the graphics etc if you try too hard to make it all look super realistic. By taking that away, the learner can focus more on the learning through enjoyment.

It is important to give the leaner frequent feedback. It doesn’t need to be that detailed until set intervals such as completing a major task or boss level. But small bits of feedback that reiterate correct actions or that slow the users progress by visually displaying the circumstances of their incorrect action is a powerful way to make them think the next time that happens. And can easily be recalled upon in a real world scenario.

Feedback in the form of measurable achievements is beneficial to learners. It allows reflection on their own performance against goals and increases motivation. This adds a replay value to learners to better their score.

Games don’t have to be digital

A lot of the elements discussed here are probably assumed to be made in a digital medium. But there’s nothing stopping you from using your idea for a game in a non digital representation using nothing more than pen and paper. In fact this approach is the best way to create game mechanics, rules and objectives before creating a digital version at all. Its easier to add/remove gaming elements and see how functional and easy to grasp they are within minutes. Another fun way would be to in groups create a few games around the same content then swap games and play multiple times. The important this is, by the end the learners would have learned in a fun and engaging way – which is exactly what we’re trying to achieve. The only problem with this approach is it could be difficult or at least a lot more work to be able to measure how successful the process is in the long term. Whereas with a digital approach, we can acquire usage data that can be used to tell if the learners are playing as designed or if there are updates required to things that were overlooked in the initial development and testing phases.

Making a game should be as fun as playing it! If its not then its likely that the game won’t be that fun for the learners. Test often and get new people involved along the way. The quick discussions will help refine and improve gaming elements and the way it gets displayed to make it all as intuitive and fun as possible.

Below are some examples of games I’ve played recently that are not gamified eLearning packages but just very good games. And games that inspire ways to gamify learning through creativity, competition and utilising most if not all the elements discussed in this post.

The following examples are not examples of gamification, but are non serious games. Each have elements in them that create hooks that keep the user coming back to play again and again. The idea is to utilise the ideas of some of these elements and incorporate them into serious scenarios as gamification elements.

Example for leaderboards: King of Thieves. 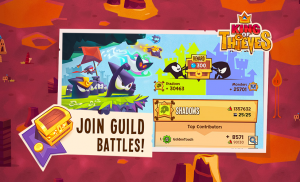 Check out the leaderboards for individual and guilds. And how you can edit your own dungeon to make it more challenging for other players. There are many hooks in this game that make you want to keep coming back and the social element makes it very competitive and fun. There are lots of ways these elements could be incorporated into a serious game. 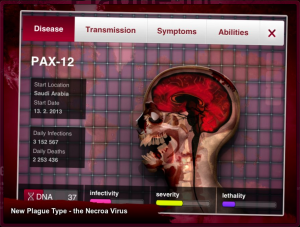 This game is simple to get started, you choose your virus and release it before attempting to mutate and upgrade it as you acquire points. The game is far from linear as every time you play you can do things differently and learn what the outcomes of those consequences are. This idea could be easily implemented into real world scenarios such preventing an Ebola outbreak. 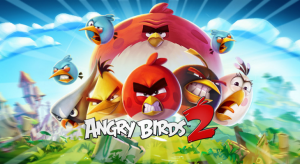 This series of games has a well defined scaffolding experience that allows any user to learn new game mechanics as they progress. As you progress you unlock more birds to throw at the green pigs, and each bird has it own pro’s and con’s such as speed and power against different materials such as glass, wood and concrete blocks.

Example of objectives: Need For Speed: No Limits. 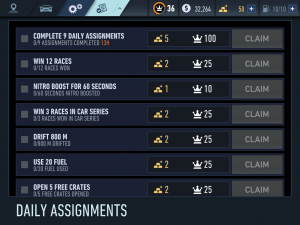 This game incorporates daily tasks that do not change but it provides a hook to keep coming back daily as for each day you complete the tasks, you are given ‘gold’ which can be used to purchase/unlock more content.