Choosing the right set up to record spoken word – Part 1

Recording the spoken word is a little bit more tricky than recording live vocals to a song. This post will explain what equipment to use to get the best possible recording on a restricted budget.

Firstly, don’t use a mic that is designed for live performance. Yes I’m talking to you Shure SM58, the SM58 is a great vocalist mic but is designed to be used extremely close to the mouth in order to get enough separation from the vocal and noise spilling from the backing instruments. These mics suffer badly from the Proximity effect also, which is when the bass frequencies are amplified the closer your mouth is to the microphone.

Don’t eliminate dynamic microphones altogether as there are some great ones out there if you got the money to spend, yet if you were to ask sound engineers the world over what type of mic they would prefer for spoken word 99.99% would say the large diaphragm condenser (or capacitor) microphone.

A lot of condenser microphones have the ability to change mic patterns. A mic pattern is the area directly around the head of the microphone that is sensitive to picking up the signal. For a full explanation take a look at this article about microphone patterns. Generally the cardioid pattern is the pattern to use. It is called a cardioid due to its heart shape. This is a good pattern to use as it rejects sounds from behind so are best used in rooms that are acoustically untreated or don’t sound particularly good.

Another popular pattern is the omnidirectional pattern. This pattern records sounds from all angles around the microphone and is good if you would like the recording to pick up the acoustical properties of the room. Other patterns include – Figure-8: Best for sounds from both the front and back. The sides are cancelled out. Best known as bi-directional, these are usually included with ribbon mics. Sometimes two radio presenters would sit either side of this pattern and  have a conversation. Supercardioid: They have sensitive rear pickups and make setting up pretty difficult.

So after some research it is decided that for our purposes of recording the spoken voice we will use a large condenser microphone with a cardioid microphone pattern.

When looking around I noticed a few microphones name re-appearing over and over so have compiled a list of these microphones.

The Behringer C1 is the microphone for those on a shoestring budget. As with everything, you get what you pay for, except with this microphone. The quality of the recordings surpass that of its low price rag and can out perform others in its price range (currently ~£35 on Amazon). 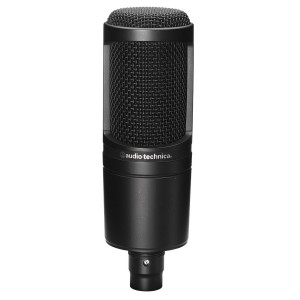 This one is a step up from the Behringer C1 and is currently selling for around £85 on Amazon. Rumours have it that this is one durable mic with some people traveling with it without it being in a hard-case. For me that is unthinkable. So if you want a microphone that you don’t need worry about mishandling then this could be the one for you.

OK so this one is not a large diaphragm nor is it a condenser but it does deserve a mention. A small diaphragm dynamic microphone that is arguably one of the most popular microphones going. A good all rounder favored by the White House for Presidential speeches since its release in 1965. At ~£85 you can’t really go wrong with this microphone. It does tend to give a brighter boosted high end which is not always desirable for spoken word. 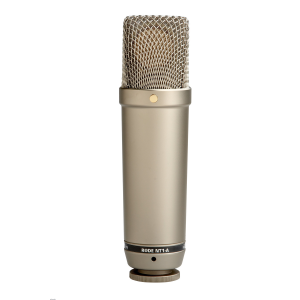 This microphone has earned itself the title ‘quietest microphone of all time. Apparently you are able to turn the gain all the way up and still hear no hiss. Amazing. This microphone is so quiet that it does pick up everything so be sure to treat your environment.

A more affordable version of the 414 this mic is used by a lot of rap and R&B vocalists with the most highlighted feature is its ability to accentuate sounds.

Another industry standard mic for recording vocals, this little beauty has a built in vlavbe amp to give a warmer sound. Many reviews have reported that this is one of the best mics around, even out classing the heftily priced Neumann range.

Others to note are the Sennheiser MD421, the Electrovoice RE20 and AKGC414. All 3 of these are considered industry standard for different purposes but this article is aimed more at the semi pro home studio as opposed to industry models. The 3 models mentioned above vary in prices between £700-£1100. 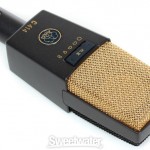 So drum roll please, out of these microphones I think the one I would have to choose is the Rode NT1-A.

I chose this one for a few reasons. It’s price, at around £130 it comes with a pop shield and suspension mount. It’s quality, it’s a solid chunk of metal that you don’t feel you have to handle like a delicate egg for fear of breaking and mostly its ‘quietest microphone in the world’ label. To be undisputed and the best at something in the whole world is an accolade that I respect. The lack of hiss would mean less work in post production which saves a lot of time.

Below is a great video showing the quality of the recordings gained from this microphone along with a great ‘off axis’ technique that changes the tonal properties of the voice.

Below is a link to a great website. It allows you to ‘blind test’ a selection of microphones so you can decide for yourself which sounds better. Each microphone is lettered. Take a listen on some decent headphones or speakers. Note down the ones you like the sound of and then click the link at the bottom of thew list to find out the names of the microphones that you liked the sound of.

I will be looking at portable vocal booths and post production software.

← Added jQuery to your Lectora project, to create an image slider.
The design; Learning curve. →