Games and Simulation enhanced Learning (GSeL) Conference. How was it for you? Here’s my take…

I was really looking forward to this conference due to the main subjects for discussion being games and simulation. Serious games require careful consideration and development in order to be useful. And one of many things I noted during this day was that there is a lot of great projects out there and people with a lot of enthusiasm and experience in this area. And the other important part which is becoming more and more accessible is the technology. More on that later!

From some of the sessions I attended, I liked seeing reference to some high-quality commercial games are being used as part of the research. For example in the session by Matthew Barr – the role of video games in higher education and beyond. The games used in his research included Portal 2, Warcraft 3, Borderlands 2, Minecraft (of course) and more! This ties in with what I’ve always believed about games for education: that we should draw upon the successes of these games when planning on developing games for education. We shouldn’t have to reinvent the wheel with regards to game mechanics. As the companies and their developers have invested a lot of time, money and experience in making their game target the 6 things raised by Professor Nicola Whitton: rewards, goals, challenges, progress, mystery, and competition. By carefully crafting a project to employ these criteria, plus of course, adding your chosen content into the mix. Its no wonder many (not all – which is another topic for discussion) students enjoy learning this way. Especially when trying to learn complex tasks and theories. Learning via a game can help create memory triggers, can help learning feel less of a chore, and can aid competition and conversation.

Some of the results shown by Matthew helped paint this picture too:

Admittedly, when I think about games, I instantly think PlayStation, Xbox and games on a mobile device before the more traditional board games (maybe a generation thing?!). But this isn’t always necessary to create an engaging platform to learn from. James Moss shared some excellent examples of gameplay in a more traditional sense. By having people stand around what was effectively a game board, and build up and map various aspects of the outcome over time-based on a pre-defined set of rules and the case in hand. This encourages team play and cooperation as well as students to really think on their feet. I really enjoyed James’ presentation. Clearly, a lot of thought and preparation went into the project and I can really imagine students getting a lot out of its interactive nature.

I like this back to basics approach to GBL. The best digital games are prototyped and played out initially on pen and paper as its the easiest way to get people together, to discuss and make changes on the fly.

I helped out a little with the “Exploring Virtual and Mixed Reality for Teaching & Learning” VR workshop, presented by Luke McGowan, Jamie Carmichael, and Paul Watson. And I’m sure there will be a separate blog post or two from them about this workshop and draw their own conclusions. But I really enjoyed the hands-on time. There were 20-30 VR enthusiasts that attended and we had a lot of VR equipment up and running, such as 10x google cardboards, 8x Samsung VR, 1x HTC Vive and 2x HoloLens.

There was a lot of interest in the Samsung VR for their good performance, ease of use and accessibility advantages over the more powerful and more expensive HTC Vive. We had a few VR apps installed on each device with the plan being to have something of interest for everyone.

A few people I showed the Vive too were simply blown away by its capabilities. Their reactions were very similar to a recent student VR in surgery event that TELMeD helped with not long ago. Students that tried it left enthused and excited by the potential of using this as a way to learn in a safe, fun, yet challenging way.

Then there was the HoloLens. Demoed by Jamie (TELMeD’s resident HoloLens expert). He showed a very exciting game called Fragments, where “You become the detective in a high-tech crime thriller.” The fantastic thing about this game is the concept that any room you are in, becomes the murder scene and level, including interactions within it. The HoloLens maps objects and surfaces during the initial loading time, then what is effectively the level gets placed around you.

I also strongly believe the technology is now accessible enough to be used by everyone that wants to embed GSeL into their teaching and learning with minimal cost and experience. For VR, yes it still gives headaches and makes people feel sick, but from my experience, when using the right technology with the right project, this only really happens under heavy use and not for short 15-30 minute sessions. I feel this is good enough for now, as VR has the immediate wow factor that other technologies lack. I really enjoyed the VR workshop, and I enjoyed the discussions that it generated from the short use of VR. It drew so much enthusiasm and ideas. The main drawback as I see VR is the time to develop an experience or game. But even this is becoming more and more accessible, as shown in the Hackathon: VR for Non-programmers session the day before the GSeL conference.

I was really pleased to see a good attendance as well as the variety of skillsets everyone brought. For me, it painted a picture that there is a lot of interest in VR games and simulation for learning. And interestingly, it seems there is a lot of scope for overlap and collaboration between faculties with some of the projects that were demoed and presented.

This post only really scratches the surface of the sessions I attended. There were many other excellent sessions and workshops during the day. For more information about those, see the links at the bottom of this post.

Check out some photos from the day in the gallery below. Select an image to see it bigger. 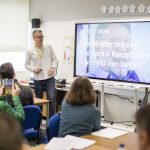 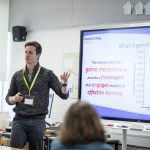 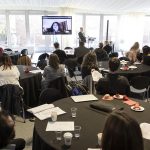 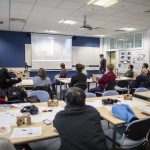 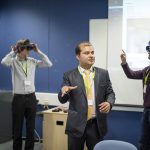 Read more about this conference via the links below.