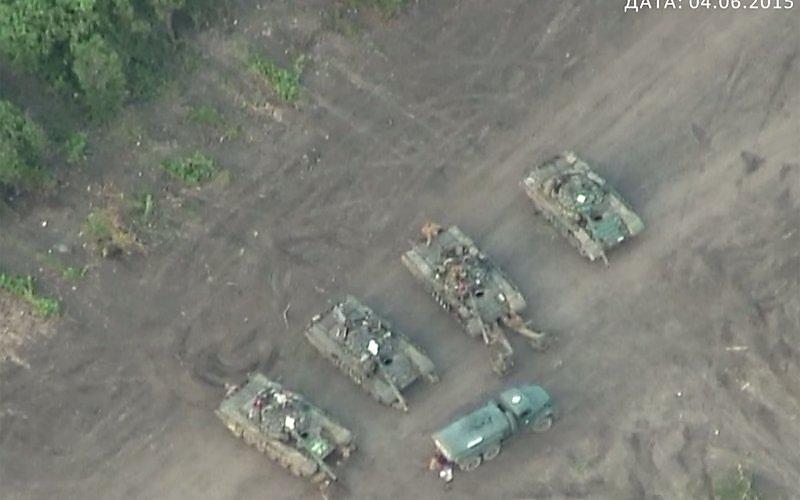 A Ukrainian drone reviled the existence of a Russian military camp just south of the village of Sontsevo in the Donetsk region just 12km from the Ukrainian front-line settlements of Granitnoye and Novolaspa.

The drone belongs to Dnipro-1, one of Ukraine’s pro-government volunteer Regiments and it conducted two flights over the same area, on 20 May and 4June.

During the period that the drone did the two flights, the camp grew from a small collection of tents and engineering vehicles, into a forward operating base, equipped with tanks, communications equipment, personnel quarters and even new roads. On 20 May the drone filmed around 70 troops, several trucks and engineering vehicles and construction equipment, as well as two T-72 tanks and a communications vehicle.

The new camp is close to the Ukrainian port city of Mariupol and a short distance from the Donetsk-Mariupol highway. The military equipment that is concentrated at this camp could allow the separatists to launch an attack from the north to the port city of Mariupol, cutting off the defending forces from the rest of Ukraine.

According to the Dnipro-1 Regiment on 4 June there were nine T-72 tanks at the camp, one of them equipped with a mine-clearing gear and several fuel bowsers.

In addition to this military equipment, the Ukrainian drone found one communications vehicle, an anti-tank gun, tents for accommodation, meetings, and cooking.

Finally the drone found structures that were erected to mask some of the tanks from being seen from ground level, while the whole complex was sheltered by woods.