INDIA’S EVOLVING NUCLEAR FORCE AND ITS IMPLICATIONS FOR U.S. STRATEGY IN THE ASIA-PACIFIC 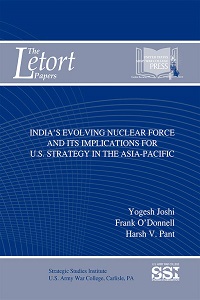 India’s growing and diversifying nuclear force raises challenges for its defense planners. New nucle­ar options need to be located within a holistic view of India’s defense approach, with clearly assigned roles for conventional and nuclear forces dependent on the threats posed.

This also generates issues for U.S. defense plan­ners. The current U.S. policy is to energetically assist the defense projection of India so as to help compli­cate the rise of China. This focus has an underlying as­sumption that the United States and India do not mili­tarily threaten each other.

This framing could poten­tially lead to an overlook or downplay of the potential negative effects from Indian nuclear force develop­ments —and their related strategic interactions with Pakistan and China — in terms of the risk they pose to U.S. interests. In reality, the nature and domains of tri­lateral India-Pakistan-China nuclear and conventional competition are rapidly shifting, and close assessment of their potential effects is merited by the growing de­ployment of U.S. forces to the region.

India’s nuclear doctrine has not been publicly re­vised since 2003. The nuclear doctrine commits India to policies of “no-first-use” but “massive retaliation” if struck with nuclear weapons, with a force posture characterized by “credible minimum deterrence.

” However, the context of Indian nuclear policy has changed since 2003, including new nuclear and con­ventional security challenges posed by China and Pakistan; growing concerns within India’s strategic community regarding the credibility of the “mas­sive retaliation” commitment in particular; and new nuclear force options that are suggestive of interest in a war-fighting capacity. These developments are all taking place without a substantive public nuclear doctrine review to incorporate these new conditions at an official level.

Indeed, this problem is not isolated to the nucle­ar domain of Indian defense; security policymaking also lacks integrated planning processes. New Delhi should conduct a public strategic defense review, in­cluding that of their nuclear doctrine, to assess the new threats it faces and clearly structure the role of conventional and nuclear forces in meeting those threats. In particular, this process should reiterate that nuclear weapons are only credible as a last-resort tool to prevent national extinction, with other threats to be met with stronger conventional defenses.

This will reduce the blurring of conventional and nuclear force purposes as can be perceived in Indian strategic dis­course, which is a consequence of the new regional, doctrinal, and force posture developments influenc­ing Indian strategic perceptions in the absence of such an official review.

U.S. Approach Toward the Changing Nature of India-Pakistan Competition.

The United States emphasis on strengthening India’s defense projection capabilities is driven by a dominant view of India in terms of a partnership to complicate the rise of China. This framing carries risks of U.S. diplomats and defense planners overlooking or downplaying new nuclear and conventional ten­sions in the India-Pakistan relationship in U.S. crisis resolution simulation and planning.

A future India-Pakistan crisis will occur in a dra­matically different political and strategic context from those before. New developments include: the fielding of a dedicated tactical nuclear missile by Pakistan and potentially nuclear short-range missiles by India; dif­ferent views of where their bilateral nuclear threshold is and should be; continuing Indian interest in con­ventional limited war options despite the very low nuclear threshold announced by Pakistan; and, the contrasting breadth and levels of trust in the compar­ative U.S.-India and U.S.-Pakistan strategic relation­ships, which could encourage Indian decision-mak­ers to further escalate their response to a crisis with an assumption of U.S. support. U.S. crisis interven­tion planning should recognize and build in the po­tential involvement of some of these factors.

The last three India-Pakistan bilateral crises have been settled only through substantive U.S. intervention, and U.S. diplomats and forces should not let their principal regional focus on China preclude awareness of these new developments.

The nuclear strategic thought and force develop­ment of India, Pakistan, and China are interlinked, but this is not recognized at an intergovernmental level through trilateral nuclear strategic dialogue. Bilateral nuclear dialogues between pairs within this triad have been attempted, but have largely failed due to the inherent reality that effective nuclear risk reduc­tion measures, efforts to reduce strategic mispercep­tions, and greater clarity regarding adversary nuclear intentions can only be achieved by having the third member of the triad as a committed participant.

The United States should urge all three capitals to start such a trilateral nuclear dialogue. However, for such a dialogue to be successful, Washington may have to join the dialogue as a full participant.

The Chinese hesitancy to join such a trilateral dialogue could be partly caused by the centrality of the United States in its nuclear and conventional threat percep­tions, with poor prospects for substantive regional nuclear risk reduction progress without American participation.

As U.S. strategic attention and posturing is increasingly di­rected toward the Indian Ocean, diplomats and local forces should prepare for a crisis scenario involving these nuclear-armed naval forces, including potential confusion of adversary conventional and nuclear na­val forces.