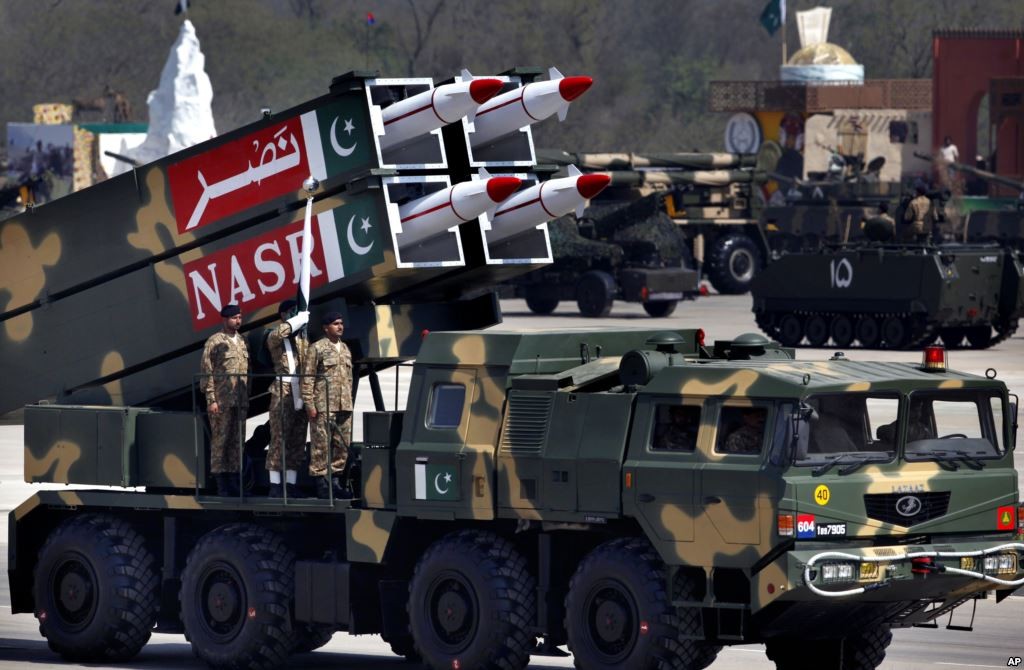 India has traditionally followed a minimum deterrence doctrine. This concept is organized around the assumption that a small number of nuclear weapons creates sufficient risk in adversary threat assessments to have deterrent effect.

This contrasts with the alternative maximalist concept: that nuclear deterrence is achieved only through guaranteeing numerical and destructive superiority against adversary nuclear capabilities, alongside development of a range of warfighting platforms. Nuclear weapons have been seen within India as having political rather than military purposes; and to be used only as a last resort.

This nuclear capability also threatens to undercut the credibility of India’s massive retaliation commitment, as Indian decision-makers are now formally committed to launch a devastating widespread nuclear attack even in response to a single localized Nasr strike. While the Nasr is still in initial stages of deployment, this platform and the strategic thinking behind it is propelling Indian debate regarding its effects on national security.

Indian civilian officials reportedly reviewed the implications of the Nasr for Indian national security in 2011, and concluded that it did not merit changes to India’s 2003 nuclear doctrine. However, such views are not universal. There is interest within Indian civilian official circles for a new focus on building up the destructive credibility of Indian nuclear forces.

While upholding the tenets of the 2003 doctrine, India’s military estimates substantial room on the conflict escalation ladder with Pakistan for rapid cross-border conventional strikes. These strikes would be designed to have strategic effect, yet not motivate Pakistani tactical nuclear escalation.

India’s recent “Shatrujeet” exercise, concluded in April 2016, simulated fighting through adversary nuclear attack and was accompanied by official remarks that India would not be deterred by Pakistani tactical nuclear weapons.These plans, titled the “proactive war strategy,” would entail a more expansive military campaign than India has conducted since it and Pakistan became overt nuclear weapons states in 1998.

Such plans are also detailed by Pakistani officials as a core reason for developing the Nasr as a deterrent response. As such, they heighten Pakistan nuclear threat perceptions and arsenal developments that in turn undermine Indian confidence in the suitability of minimum deterrence. This places India in a Catch-22 situation with regard to assuring the credibility of minimum deterrence through its present conventional and nuclear approaches.

This focus also overlooks the reality that a Pakistan-sponsored terrorist attack remains the most likely trigger for an escalatory crisis eventually involving the Nasr. Outside of a response to such a terrorist attack, India has little incentive to conduct significant strikes against Pakistan. As the perpetrators are likely to be initially apprehended (if the attack is prevented) by Indian police and intelligence agencies, strengthening these subconventional capabilities must be a primary focus of India’s overall response to the Nasr.

In response to these challenges, India should retain and reiterate its minimum nuclear deterrence concept, including its no-first-use pledge and with a new focus on ensuring “assured” rather than “massive” retaliation. This above policy review, however, must also incorporate that of present conventional and subconventional defense approaches to ensure these align with and do not undermine minimum deterrence.

In conventional strategy against Pakistan, India should replace the proactive concept with one focused on defensive eviction of invading forces. There remain doctrinal and logistical doubts about the existence of a theoretical Indian proactive operation inside Pakistan territory that could have strategic effect yet not carry nuclear escalatory risk. This reform would help in reducing South Asian nuclear tensions, and accordingly Indian and regional demand for larger and more technically diverse nuclear arsenals.

New political and resourcing attentions must also be devoted to developing India’s intelligence and domestic police infrastructure. These capabilities constitute the most effective barrier against Pakistan-sponsored subconventional attacks that remain the most probable cause of a bilateral escalatory crisis leading toward Nasr use.

This more holistic view of minimum deterrence will therefore most effectively bolster Indian security in the post-Nasr context. More broadly, these reforms will also support Indian foreign policy objectives of obtaining global recognition as a responsible nuclear power and of reducing regional security tensions that threaten its economic growth potential.