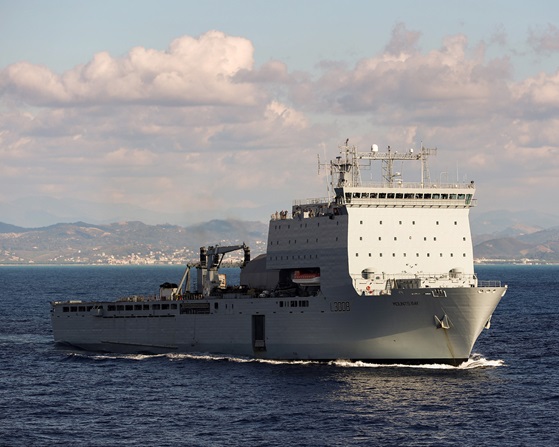 Home with just seven days to spare before Christmas Day are the sailors and Royal Marines on RFA Mounts Bay which has completed a marathon deployment in the Mediterranean.

The amphibious support ship has been away from home for 349 days as one of the first vessels to deploy in 2016… and last to return.

In the intervening 11½ months, the ship – which is typically used to move Royal Marines, their vehicles and supplies ashore during amphibious operations – has focused her efforts on trying to curb people trafficking/smuggling into Europe from Africa and the Middle East, and deal with the ongoing aftermath of the Libya’s civil war in 2011.

To support those varied and challenging missions, she’s been home to an eclectic mix of units and equipment – Wildcat and Lynx Mk8 helicopters, landing craft, raiding and boarding craft, Army beach craft, the green berets of 42 and 45 Commandos, 539 Assault Squadron Royal Marines and their specialist boats, and a small Royal Navy operations and medical surgical team.

During the 33,000 nautical miles sailed on patrol, Mounts Bay has been involved in: 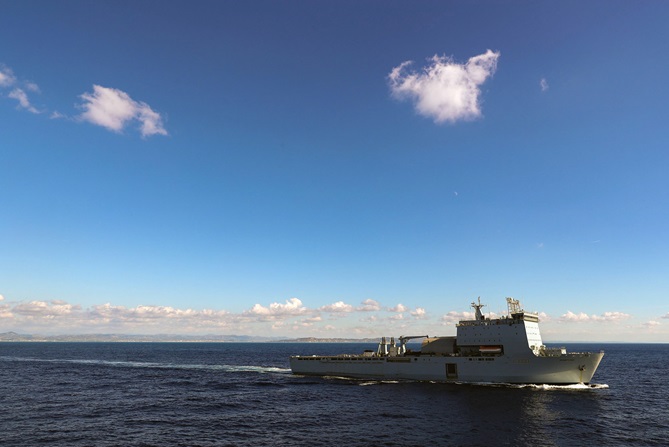 All very worthy operations… but the highlight for many aboard was the presence of Charlie, a Springer Spaniel military working dog, who joined Mounts Bay to ‘sniff-out’ illegal weapons and munitions during the mission off Libya – a first for the Royal Fleet Auxiliary.

With large contingents of Royal Marines aboard, the galley has been exceptionally busy. Those aboard saw off 1,205kg of beef rump, 22,744 litres of milk – enough to fill the fuel tanks of more than 400 family cars (we wouldn’t recommended it) – 34,000 eggs and nearly three tonnes of sausages.

“I am so proud to think that the ship has supported UN Security Council resolutions for the removal of the last chemical agents from Libya and supported both NATO and the EU in their respective migrant and arms-trafficking operations,” said her Commanding Officer Capt Chris Clarke RFA.

“Although at times the term ‘re-role’ seemed to be as frequent as our Sunday roasts!

“2016 has been characterized by varied and unique type of tasking for the Royal Fleet Auxiliary – not just enabling the projection of military effect but delivering it too.”

After a spot of maintenance and leave following her 2016 exertions, Mounts Bay will resume front-line duties next year, this time in the Caribbean dealing with drug trafficking and providing relief and humanitarian aid in the event of a natural disaster in the region.