2,900 EXPLOSIONS IN A DAY – HEAVY ARTILLERY AND TANK FIRE RETURNS TO THE FRONT LINE IN UKRAINE 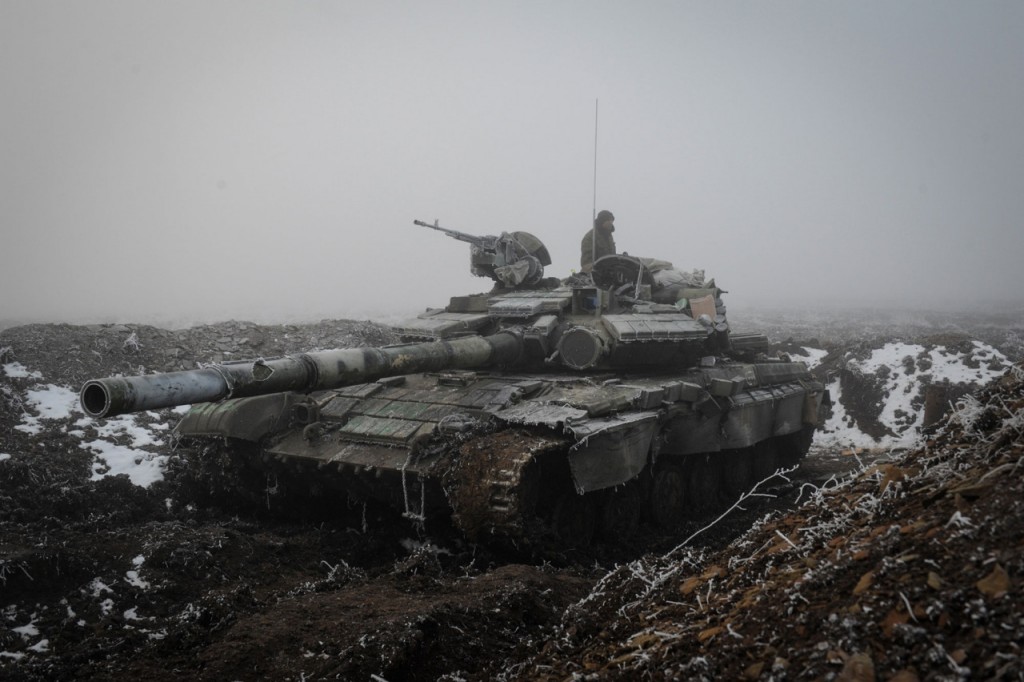 An early morning artillery barrage started the latest bloody scrap in eastern Ukraine Sunday as Russian-backed militants and government troops clashed near the town of Svitlodarsk.

A spokesman for the Ukrainian military, Col. Andriy Lysenko, said that five soldiers were killed and 16 wounded during the day-long battle and that Russian-backed separatist forces had attempted to break through government lines. It was the largest single loss of life for Ukrainian troops in five months.

A resident in a nearby separatist-controlled town, who asked not to be identified for personal security reasons, dismissed the idea that any separatist troops had attempted to attack and said the fighting was merely “rocket-tennis” between the two sides.

Lysenko said the Russian-backed fighters suffered about 50 casualties, but that figure could not be independently confirmed.

The site Censor.net, quoting an unnamed Ukrainian defense official, said that four bodies held by Ukrainian authorities were not claimed by the militants, suggesting that the deceased were either Russian soldiers or citizens.

An international monitoring group documented almost 3,000 explosions in the region Sunday — up from 700 on Saturday and 100 on Friday. The majority of Sunday’s detonations were recorded around Svitlodarsk. Despite multiple cease-fire attempts and efforts to remove heavy weapons from the front lines, the day-long bombardment, which included tanks, rocket artillery and howitzers, laid bare the shortcomings of international efforts to quell the conflict.

The fighting sent the residents of Svitlodarsk to their basements, and around nightfall, as temperatures dipped below freezing, the town lost power and gas. Utilities were restored around midnight, according to the Organization for Security and Cooperation in Europe, which has observers on the ground.

Since summer 2014, the front line in eastern Ukraine has been mostly static, and both sides have been relegated to exchanging artillery and machine-gun fire across a heavily mined no man’s land. Svitlodarsk is near the border between the two breakaway territories known as the Luhansk People’s Republic and the Donetsk People’s Republic and represents a Ukrainian-controlled bulge along the front line.

In talks brokered by France and Germany, Ukraine and Russia agreed upon a series of cease-fires known as the Minsk Agreements to stop the conflict, but both sides continue to clash daily. Earlier this month, NATO Secretary General Jens Stoltenberg encouraged allies to maintain economic sanctions on Russia until there is a lasting cease-fire.

While Russia continues to support the separatists, the West has buttressed the Ukrainian war effort through training programs and nonlethal aid that includes vehicles, counter-artillery radar, body armor and night-vision equipment. The most recent defense bill passed by the U.S. Congress allocated an additional $50 million for Ukrainian military assistance in 2017, bringing the total to $350 million.

It is unclear how President-elect Donald Trump will approach the conflict. His pro-Russian statements have put both NATO allies and the Ukrainian government on edge.

Since the conflict in Ukraine began in April 2014, nearly 10,000 people have been killed and more than 20,000 wounded, according to a United Nations report in June. More than 1.6 million Ukrainians have been internally displaced by the conflict.

← UK AND FRANCE MOVE TO NEXT PHASE OF JOINT UCAS DEVELOPMENT
U.S NAVY WANTS TO GROW FLEET TO 355 SHIPS →