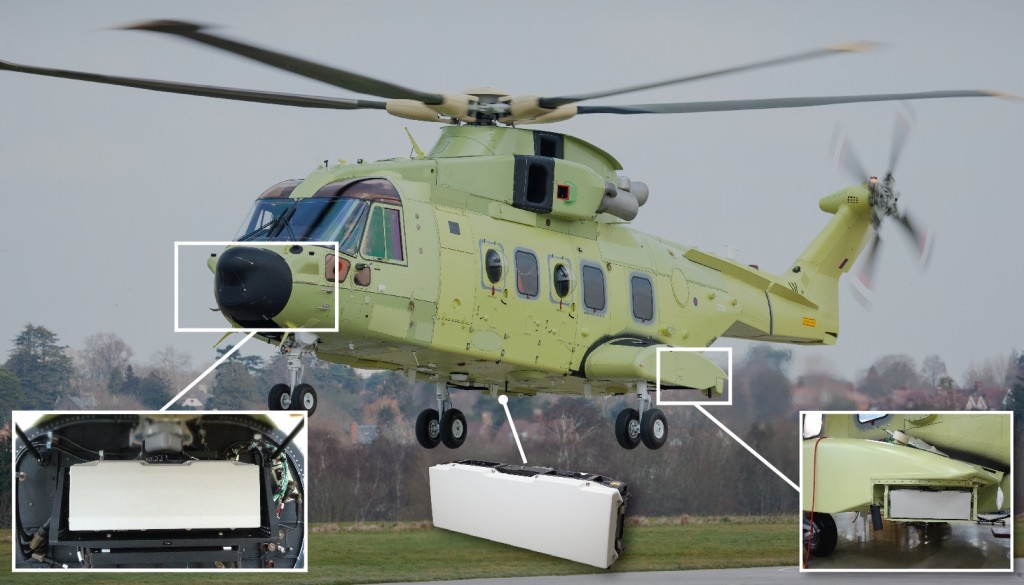 The recent launch of Osprey E-Scan (Leonardo-Finmeccanica), the world’s first commercially available lightweight airborne surveillance phased array radar able to provide a persistent 360 degree field of view without moving parts, is set to revolutionize maritime operations. But what are the benefits of SAR and specifically Osprey to military and civilian maritime operations, with increasingly focused on maritime interdiction?

SAR provides several different functions with the considerable advantages of being 24/7/365 (active rather than limited by passive solar based electro-optical systems), is able to penetrate thick cloud and fog to provide high resolution imagery of a sea surface. These functions include: vessel detection, oil spill detection, sea ice monitoring and iceberg detection.

Vessel detection: As shipping traffic grows the pressure on the security of the world’s oceans is increasing and near-real-time surveillance of shipping routes is essential to detect illegal and dangerous activity (e.g. illegal fishing, terrorism, narcotics traffic, immigration or piracy).

Oil spillage: Oil spillage data is required to restrict the environmental impact of accidents at sea, and further minimized by collision avoidance technology such as AIS. Leonardo’s SAR also gets distinct information about the source of oil pollution or leakage to assist with audit trails and accountability in the case of prosecution (assisted with precise AIS GPS information).

Radar satellite imagery is well-suited to providing information on oil films on the sea surface. One such system now available is TerraSAR-X part of the Airbus Defence and Space Geo-intelligence Programme.

Surveillance radars are essential to modern maritime fleets and it is the ability to detect small and difficult targets in rough seas that is their most valuable maritime capability. Selex ES (a Finmeccanica company) inherited the reputation of the light weight Seaspray (Mk1 in 1971) to provide the Seaspray 5000 and 7000 series and now the latest system with the introduction of Osprey.

Significant technological developments of microwave phased array technology have taken us a long way since Seaspray’s inception in the Cold War era as a small ship’s helicopter application on the first Lynx platform, then developed by Ferranti.

709 Naval Air Squadron was the very first RN Lynx squadron, commissioned in 1978, with introduction of Seaspray into over 40 frigates and destroyers. For its time observers had a powerful sensor that gave them unprecedented situational awareness and a significant ability to detect and ‘cue for’ small targets from sea and weather clutter. In search mode the radar sees a wide forward-looking angle of 180 degrees, or narrower as required.

Pulse durations were auto-selected by the radar according to the 3 possible range scales that were set. An identification mode also exploited transponder returns for target identification, with further navigational, and search and rescue possibilities.

Seaspray led in turn to development of the Blue Fox intercept radar for the RN Sea Harrier FRS Mk 7 carrier-borne fighters with pulse modulated capability. Blue Fox was replaced in the early 1990s by the then advanced Blue Vixen multimode pulse-Doppler radar.

In 1982, the same year as Seaspray ‘gained its spurs’ in the South Atlantic conflict the Edinburgh radar team sought to develop the next Seaspray generation, the Mk 3  to provide 360 degree all-round coverage, with advanced processor techniques.

Enter the Blue Kestrel radar, an I-band frequency agile radar used advanced Travelling Wave Tube (TWT) technology and pulse compression. It could pick up small radar contacts of Indian Ocean Somali pirates across the vast expanse of the ocean in the early 21st Century. In 1991 in the aftermath of the Cold War GEC Ferranti privately funded a maritime surveillance radar portfolio. Out of this arose the Seaspray 5000E AESA multi-mode surveillance radar.

The Seaspray 5000E radar still employs an AESA processor coupled with a compact state-of-the-art AESA antenna to monitor air to surface coverage, and is installed in both fixed-wing and rotary-wing platforms. It combines mechanical scanning of the antenna with electronic scanning to provide a wide range of capabilities from long range search to small target detection. A real-time SAR processor provides target and vessel imaging capability as well as range-Doppler maps.

Results are outstanding with near-photographic quality resolution of surface water and land terrain and identifiable features out to ranges approaching 200 NM. Doppler components generated are greater from the uppermost mast structures, but the majority of the superstructure is from lower bulkhead and hull components moving with smaller Doppler components.

The Seaspray 7000E multi-mode surveillance radar with its ability to interleave modes and waveforms pulse to pulse, provided further improvements in target imaging with surface surveillance and weather detection simultaneously

Combined with the Seaspray 7500E system (with X-band operational installation), and its SAR imagery, detection ranges of up to 320 NM are possible and a system mass of just 110 kg. Seaspray provides a capability as yet only dreamed of in the civilian merchant and aviation arena.

Developed in the UK by Leonardo-Finmeccanica, Osprey keeps the Italian owned company several years ahead of other competing maritime aviation platform radar technology.  Based around a flat-panel array antenna design, Osprey is the world’s first lightweight airborne surveillance radar built without moving parts. Norway became the first launch customer for the radar, purchasing Osprey in their acquisition of 16 Leonardo-Finmeccanica Helicopters AW101s for Norway’s All Weather Search And Rescue Helicopter.

Osprey’s flat panel array design opens up the realistic possibility for installation on an increasing list of manned and unmanned aircraft. In its configuration Osprey comprises 3 flat panels, one on the front of a helicopter and 2 at the rear, to create the 360 degree field of view. Space requirements are minimal and the helicopter’s underside is left clear, maximising ground clearance for rescue landings over rough terrain.

Osprey represents the latest in complete aviation ‘E-scan’ technology, meaning it uses electronic-only phased array steering to direct the radar beam- moving from target to target in a fraction of a second. Because of the speed of these changes in direction, Osprey effectively provides simultaneous persistent coverage in multiple directions.

One thing is very clear, that phased array and synthetic aperture radar developments will to be at the forefront of persistent maritime surveillance requirements for a very long time to come.