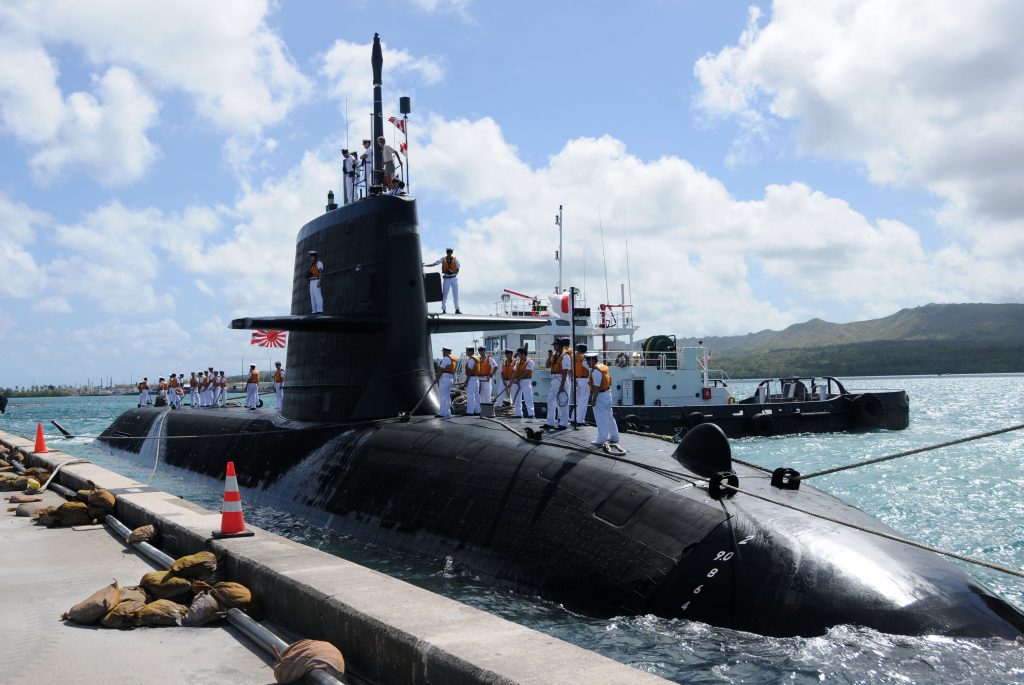 With the arrival of this eleventh Soryu-class submarine the Japan Maritime Self-Defence Force (JMSDF) will be the world’s first navy to field a conventional submarine powered by Li-ion batteries.

While Li-ion batteries offered similar endurance to an AIP system combined with lead-acid batteries at low speeds, Kobayashi said their advantage was found in longer endurance at higher speeds (e.g. during an approach or evasion) thanks to their higher capacity.

Furthermore, Li-ion batteries can be recharged at sea by snorkelling, which Kobayashi described as ‘revolutionary’, when compared with an AIP system.

They also have a shorter indiscretion time due to a high charge current, whereas lead-acid batteries take a long time to restore their electrical capacity. Additionally, Li-ion batteries have a long life, are maintenance-free, enjoy simple operation and result in a simpler power structure.

Their biggest disadvantage is monetary, however. The first Li-ion-powered Soryu-class submarine will cost JPY64.4 billion ($566 million) as opposed to JPY 51.7 billion for the preceding boat in the class. Much of this $112 million difference is due to batteries and electrical circuits.

As Li-ion batteries are lighter than lead-acid batteries the Soryu platform had to be redesigned slightly to maintain weight/balance.

Two Li-ion types are available: lithium nickel cobalt aluminium oxide (NCA) manufactured by GS Yuasa; and lithium-titanate (LTO) from Toshiba. The JMSDF will use NCA-type batteries whereas Kobayashi believes LTO types were offered to Australia for its Future Submarine proposal.

The retired submarine commander believes that there is no clear single lithium-ion solution as a submarine main battery, so he predicted future submarines could optimise different power sources. For mobile operations, for example, NCA batteries and diesel is ideal, while an ambush submarine would operate better on fuel cells, LTO and diesel. The lowest-cost option would be LTO and diesel.

Japan’s introduction of a submarine employing Li-ion batteries is the culmination of many years of research that commenced in 1962. The first Li-ion battery was ready in 1974 but it did not meet requirements.

Because fuel cell technology was not yet mature and the cost of Li-ion batteries was prohibitive, Japan turned to Stirling AIP systems. From 1991-97 AIP was used on a testbed before being installed into a Harushio-class submarine in 2000-01 for trials.

Meanwhile, tests on Li-ion batteries continued to the point that the JMSDF asked for a Li-ion-powered Soryu-class boat in its FY2015 budget request.

← RUSSIA TO TAKE PART IN IAF TENDER FOR 400 FIGHTER JETS
TURKISH EXTREME-RIGHT PARTY LEADER TO GREECE: “REMEMBER WHAT HAPPENED IN 1922” →