DRONES AND SOCIAL USE ETHICS IN THE FIGHT AGAINST COVID-19

In recent weeks there has been a lot of television and internet footage of widespread Chinese drone use in a range of COVID-19 related applications. Many have seen YouTube video footage [1] showing food and vegetables, being delivered by drones to ‘quarantined’ residents. In Zhejiang, province in Eastern China, the local government enlisted drones to drop face masks to people in isolation. According to Zheng Jianbo, the Communist Party Secretary in Zhejiang “drones usually brought instant noodles, and life necessities to the locals.”

Chinese and South Korea have adopted crop spraying civilian agricultural drones to conduct disinfectant ‘misting’ of outdoor spaces; but how effective this is, is not yet clear. However, China and other nations have demonstrated that it is easy for these platforms to conduct crowd control under the pretext of adding them to their disease fighting arsenal. Self-driving vehicles are also being used to some effect delivering supplies to medical workers in Wuhan (JD.com), and several Chinese hospitals have recently purchased the latest UV disinfecting robots from UVD Robots in Denmark. China has also started using drones kitted out with the latest radiometrically calibrated false colour thermal cameras to check quarantined residents’ skin temperatures [1] (figure 1, and  figure 2). 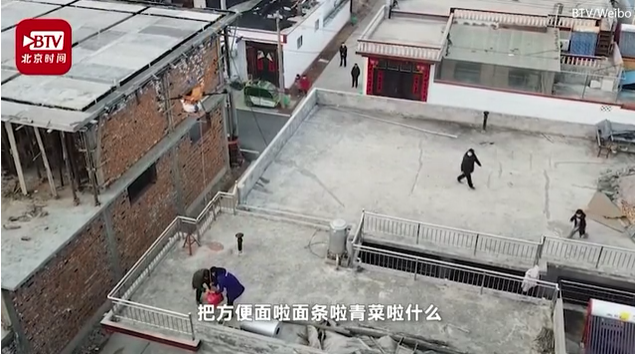 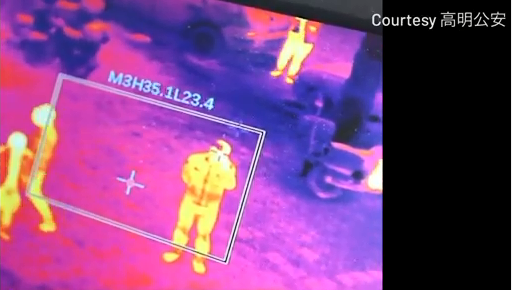 Cameras can identify a person with higher than normal temperature remotely from the air, but temperature measurement alone is not entirely fool-proof as temperatures may appear higher than normal for several reasons, not least of which is taking exercise, or wearing warm clothing over most of the body. China’s well established mass surveillance system has been adapted with great efficiency to co-opt industrial drones to ‘ensure’ an estimated 50 million urban Chinese residents remain at home inside a dozen cities. Industrial software which was not intended for crowd control, was rapidly modified for unexpected applications such as disease detection, as well as mass population management. Modified drone platforms have not only been quickly fitted with thermal sensors, but high-definition zoom lenses, loudspeakers and chemical spray jets as well.

However, the suspension of civil liberties does not just lie within the remit of Chinese authorities, as we have all seen a wide-range of largely European nations’ law enforcement agencies’ and others, incorporating drones to enforce public compliance, regardless of the legitimacy of enforcement, nor the precise rules of drone engagement having been established. Italian police have nonetheless begun using drones to spot gatherings of people who may be trying to avoid the nationwide quarantine. The Italian Interior Ministry reported last week that over 200,000 people have been ‘controlled’ by the police. Drones have been in action in several regions including Emilia-Romagna, and Lombardy, the heart of the Italian epidemic. Meanwhile Israel has unleashed its extensive capabilities in cyber technology, already having the word’s first military drone division, now to monitoring people movements. From Spain to Kuwait, drones equipped with loudspeakers have been telling citizens to go back to their homes and stay indoors. In France drones have been used by police to ensure residents stay indoors, piloted by drone company Drone06. Their mounted drone speakers can reach +100dB acoustic sound levels, somewhat short of a jet taking off, but hard not to notice even at a considerable distance.

On the other hand as cases of coronavirus COVID-19 continues to climb  with over 875,000 confirmed cases to date (31st March 2020), US Defence Department officials have stated they have no plans currently to turn drones into disinfecting agents, despite advances from various US companies offering their support. According to Major Rob Perino speaking on behalf of the National Guard Bureau, “The National Guard does not have this capability and is not pursing it.”

With the unprecedented increase in powers given to various Governments to suspend normal democratic processes, and to limit almost all civil liberties from church meetings, school and college attendance, to social gatherings, we all find ourselves in hitherto uncharted political socio-economic territory. The big questions are not so much about drone use itself but concerns of how willing governments’ will be to give up their newly acquired powers AFTER the medical emergency has passed, and what further draconian laws will be imposed legitimately, or unnecessarily, in the meantime. It would be sinister indeed if the COVID-19 influenza resulted in the concerted removal of democratic freedoms across western nations. If prolonged isolation, or perceived ‘house arrest’, were a protracted purposeless authoritarian period, unseen since the Soviet or Fascist eras, or turns into ‘medical’ martial law, it would be a grave mistake to think the public will forget nor forgive being treating like state-owned cattle. Driving a steam roller through national economies, especially those of small private businesses, will be unsustainable in the long term. If governments’ fail to grasp these fundamental points we may all be in for otherwise avoidable bumpy times ahead.

Strict drone surveillance measures adopted to monitor citizens during these coronavirus lockdowns may result in long-lasting theft of personal freedoms. According to Joseph Cannataci, UN special rapporteur on the right to privacy, he recently stated “Dictatorships and authoritarian societies often start in the face of a threat.” However, recent criticisms of the heavy-handed approach taken by one UK police force using drones trying to “shame” one or two walkers alone on the hills in Derbyshire, possibly near their homes, has raised questions, not least of which is why is an expensive drone being used in the wilds of the Peak District rather than controlling crowds in the middle of Sheffield? Was the footage even recent, and was it even staged by the media to attempt to control the narrative?

FIGURE 3: Police drone monitoring in the wilds of the Peak District, UK!

Lord Sumption ex UK Supreme Court Judge yesterday stated (31/3), “The real problem is when human societies lose their freedom, it’s not usually because tyrants have taken it away, it’s usually because people willingly surrender their freedom in return for protection from some external threat. And the threat is usually a real threat, but usually exaggerated and that is what I fear we are seeing now. We have to recognise that this is how societies become despotism.”

* Chris Lavers is the Principal Scientist at the Dartmouth Centre for Sea Power, and Strategy, UK, and is currently a Visiting Fellow at the Changing Character of War Centre, at Pembroke College, Oxford University on Modified Drone Applications and Their Ethics.

← DEEPWATER HORIZON A DECADE ON, AND DCSS’s 2020 VISION FOR SENSORS ENGINEERED FOR MARINE POLLUTION DETECTION
COVID-19 IMPACTS MARITIME NAVAL OPERATIONS, A TIME TO PRESS FORWARD WITH AUTONOMOUS SOLUTIONS OR NOT? →