So, to recap: the workshops were conceived of as a lead-in to the upcoming, first “Feast for the Future”, from which the subsequent utopian feasts will spread out like ripples from a thrown stone. Two afternoons of workshops, which would aim to perform, in miniature, some of the acts of bridging and connection which the contemporary situation requires from us: of discipline, sector, background, experience, place … Like the Feasts themselves, they would be a time-limited space of pooling and sharing – of information, knowledge, approach – part structured, and part open to whatever directions the combination of participants and material would throw up; with the unformed notion of a better future, and the question of how we imagine it and what that imagining can do for us, hovering in the distant as a permanent, compounded orientation point. 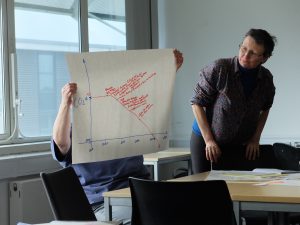 The first workshop took place recently, on the pleasingly utopian date of May 1st (weather: unseasonably cold). As well as Anastasia, Tim, Jodie and myself, present were representatives from Plymouth, Teign, Tamar, South Dartmoor and Exeter energy communities. 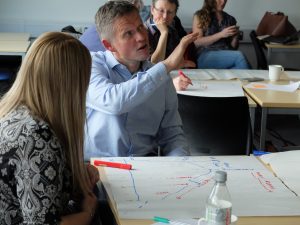 For the first half of the afternoon we worked through some of the ideas underpinning the wider ‘Imagining Alternatives’ project, from which ‘Feasts for the Future’ branches out. As a launching pad – and before we even got around to introductions – each group was asked to come up with a utopian vision of their community in the year 2068: so, anyone born in the year of the Feasts would be 50 when it came about (and anyone born at the time of the May 1968 events in France would be 100!). I then covered some background relating to stories/narrative, the future and utopia, heroically restricting myself to 5 slides, themed as follows:

(“It is easier to imagine the end of the world than the end of capitalism.”)

(The problem of scale.) 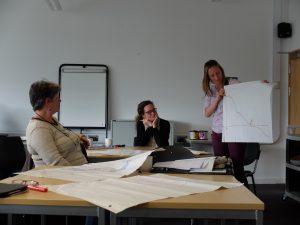 This led to the next part of the workshop: a ‘backcasting’ exercise, drawing up two historical timelines, one of which would lead to the posited utopian community, the other spooling out from ‘business as usual’. As with any such narrativized future imagining, the unexpected (blind spots? the awkwardly neglected? the only reluctantly thought?) as well as the expected (energy, work, housing) quickly appeared over the timeline horizon. Would even the ‘good’ timeline require (violent) conflict? What about spirituality (or religion): a change in what, where, how we see meaning and value – how to timeline that, and what, even, is the mechanism for it, the programme? How to appease the problem of scale? – you try and focus locally and it immediately jags off into the global? 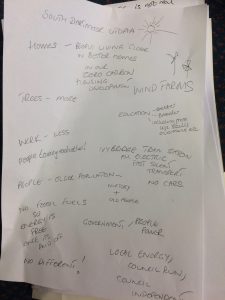 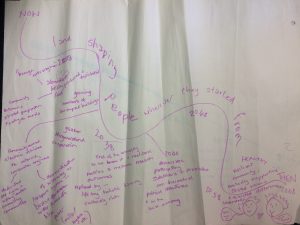 In terms of communal work and engagement, this utopian envisioning / backcasting exercise is a basic scaffold or skeleton which can take actual life in differentways: for instance, the utopian imagining can take form as a designed object, a newspaper front page, a map, a school timetable, a specific place or infrastructure (transport, energy, housing), a tourist guide … The collective process of narrativizing that future back into the present can then serve a variety of functions: throwing up possible utopian opportunities and approximations which are actually available in the present moment; identifying problems and roadblocks, which might be more or less tractable; promoting the negotiation and co-operation required to work out any collective endeavour; acting as an excuse to get together, maybe share food and drink, and throw ideas around … 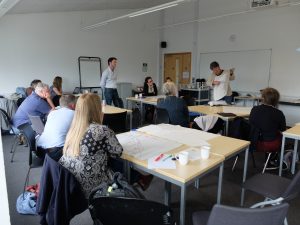 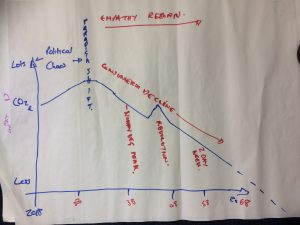 In the second session Tim Daley from Geography at Plymouth built on the first session by asking us to integrate another genre of speculative future narrative into our embryonic utopian timelines: a graphing of predicted carbon (or equivalent) emissions. As Tim pointed out, different models for these emissions have existed and exist, providing us with a ‘swarm of futures’; and translating our utopian timelines into the line on a carbon emissions graph was a brilliant way of bringing home how any future will be in reciprocal and inescapable relation with certain, uncompromising physical realities (from the point of this literary scholar, it seemed to me that our utopian imaginings at this point said hello to the genre of ‘hard’ – or scientifically rigorous – science fiction). Tim supplemented this with a fascinating science fictional moment, in pointing out that to reach the (utopian?) blue line of net-negative global emissions on his graph we would need not just the seemingly unambiguous utopian developments that groups had mentioned (e.g. full electrification), but also active geoengineering for carbon sequestration – and there would still be negative consequences into the future as a carryover from where we are now. 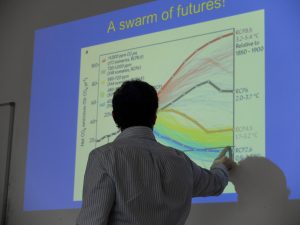 The exercise was also a forceful reminder of the challenge of scale that is climate change and global environmental disaster: even the most local of efforts – community energy projects, for instance, such as all the participants are engaged in – exist in a constant duet with much larger trends and developments. Tim concluded the exercise with a brief review of recent climate (or equivalent) emissions: noting, for instance, how a supercharged increase in 2002-3 was largely down to China’s expansion as a developing country allowed to burn carbon; while growth in the USA since 2008 has, for the first time ever, not been carbonised. The review was a timely reminder of the personal and communal balancing act required when taking on such facts: not plunging our heads into the sand, away from global developments and their often terrifying logic; but also working to recognise the optimistic (utopian?) angles lurking in such vast scales.

And we finished by a slightly unexpected departure into another kind of alternative narrative: as we were asked to provide the top ten reasons why anthropogenic climate change is (of course) a complete and utter fiction …