A meditation before the feast – by Ruth Levitas 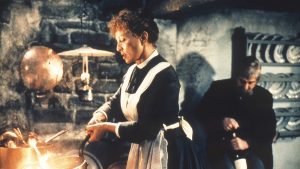 We are accustomed to think of grace, if we think of it at all, as something said before meals, an expression of our gratitude at being fed at all, and at being fed together with our companions : ‘For food and fellowship we thank thee Lord’. Robert Burns’ Selkirk grace suggests we should be thankful not only for food, but for the health that enables us to take nourishment:

Some hae meat and canna eat,
And some wad eat that want it;
But we hae meat, and we can eat,
And sae let the Lord be thankit.

‘Some hae meat and canna eat’. Burns here is referring to the decadence of surplus, to those who have more than they can eat, and thus to inequality. But there are other resonances as well. Consider anorexia, an illness particularly affecting the young but not confined to them, and disproportionately affecting young women, but also suffered by young men. Consider also those who are physically ill, where the illness itself makes them unable to eat, or where the treatment, especially chemotherapy for cancer, makes people too sick to eat. Consider the elderly, especially those suffering from dementia. Living alone they may simply forget to eat. In institutions, whether care homes or hospitals, food may be placed in front of them, but they made need a level of encouragement or assistance to eat it that the staff have neither the time nor the attention to offer. In most such institutions, the food is unappetising.

‘And some wad eat that want it’. That is more obvious, especially on a global scale. But in Britain in recent years millions of people, including very large numbers of children, have been so poor they have relied on parcels from the foodbanks that have grown up over the last decade, provided by charitable donations from the public. The Trussel Trust, the largest network of foodbanks, distributed food to 1.3 million people in the 2017/18 year, about a third of them children. Millions more cannot afford an adequate diet or live in housing conditions where cooking is not possible (such as emergency bed and breakfast accommodation), or cannot afford fuel. Some clients at foodbanks give back foods like rice and pasta because they are unable to cook them.

The Selkirk Grace bids us be aware of our good fortune if we suffer no such deprivations. For a utopian, though, the point is not (only) to give thanks but to imagine a world where no-one else suffers them either. In terms of poverty and inequality, that is relatively easy to do. We cannot suppose that utopia will solve all problems of mental and physical ill-health – though we may hope that a kinder social order will improve both, reduce the level of carcinogens in the environment, and possible find at least some amelioration for dementia. But we can hope that the food made available to the sick and frail is of better quality. (In Thomas More’s Utopiathe best quality food is taken first for the hospitals.) We can expect too that it is proffered with sympathetic care – offered, that is, with grace.

Gabriel Axel’s 1987 film Babette’s Feast suggests a different way of thinking about grace, not as an invocation or acknowledgement before food, but as an emergent effect of the meal itself. A small puritan sect in a village in northern Denmark live an austere life through a mixture of conviction and necessity. The Pastor’s two daughters, Martina and Phillipa, both have opportunities to marry and leave, but are prevented by their father and their sense of duty from doing so. After his death, they continue to live there, leading worship and distributing charity to the poor. The staple food is alebröd, stale bread and sugar stewed in beer. Into this bleak environment comes Babette, a refugee from Paris in 1871, whose husband and son have both been killed. She carries a letter of introduction, saying ‘she knows how to cook’. Many years later, having been cooking both for the household and the village poor, Babette wins ten thousand francs in a French lottery. A communal meal is already planned to celebrate what would have been the Pastor’s hundredth birthday. By this stage, the members of the church number only eleven, and as they age disinhibition and possibly early dementia have set in: they bicker, complain of old slights and reveal long-standing jealousies. These disputes break out even at religious services: the invocation of God’s grace does not heal earthly disputes.

Babette persuades Martina and Philippa to allow her to cook the meal and serve a real French dinner. The community are deeply suspicious both about the potential decadence of sensual pleasure, but also simply fearful about the unfamiliar food: they vow to say nothing about the food and drink throughout. And indeed they don’t, with the exception of the General, staying locally with his aunt. This cosmopolitan figure appreciates the quality of the food and wine, and the generosity of Babettes’s gift. But they are transformed by the feast, mellowing with the pleasure of the food, beautifully cooked and presented, and the wine – all communicated not through comment on the meal, but through facial expression and the gradual warming of relations. They relinquish and forgive old grudges. Relationships are restored to bonds of gracious affection. They are, in short, happy. The feast is a restitution in other ways too. The General is Martine’s former suitor, dismissed decades before by her father on an earlier visit to his aunt. Babette herself is revealed as the former head chef at the Café Anglais in Paris (where the General has eaten, and where a meal for twelve cost ten thousand francs). The writer of the letter of introduction was Philippa’s erstwhile singing teacher, who had hoped to take her back to Paris with him both as lover and diva.

But what is it about Babette’s feast that we might take forward into feasting in utopia? It is not just about the sharing of food, the meal as a collective experience, although eating as a social bond is expressed in the very term companionship: companions are literally those with whom we break bread. It is partly an issue of generosity in the love and care with which the food is prepared. As Kahlil Gibran writes in The Prophet‘if you bake bread with indifference, you bake a bitter bread that feeds but half man’s hunger’. But it is also about the generosity of the gift, in terms of the best food that can sourced, even if it has to be sent from Paris. And here I think we must address another question about feasting in utopia: what will we eat? Babette’s Feast includes turtle soup – real turtle soup. We see the turtle. It is to be hoped no turtles were hurt in the making of the film. You can still find recipes for turtle soup on the internet, although it is illegal in many places because we ate too many of them and they are consequently endangered species. Already by the late nineteenth century, when the film is set, the English had invented a cheap substitute, mock turtle soup, which doesn’t use turtles at all – hence Lewis Carrol’s character the Mock Turtle. Babette also serves cailles en sarchopage – quail in a puff pastry shell, complete with the head so the brain can be sucked out, garnished with truffles and foie gras (the fatty liver of force-fed geese). There have been several attempts to recreate this menu, which seems to express not the generosity of the original gift, but the decadence of contemporary culinary excess, which now includes desserts dusted with gold. No flavour is added by this, merely expense and exclusivity.

In a utopia which has regard to equity and sustainability we may perhaps take heed of the fact that the best thing we could do for the planet is to give up red meat and dairy products – or at the very least radically reduce their consumption. I think the staple diet of the future will be largely plant based, even if feast days include rarer delicacies. Or maybe it will be completely plant based, in a world where we have developed a cuisine that reflects and reproduces relationships of grace between companions and others with whom we share the planet. May we break bread together in fellowship.

Ruth Levitas is Professor of Sociology at the University of Bristol, founding Chair of the Utopian Studies Society Europe, and Chair of the William Morris Society. Her publications include The Concept of Utopia and Utopia as Method. In 2012 she received the Lyman Tower Sargent Award for Distinguished Scholarship in Utopian Studies.