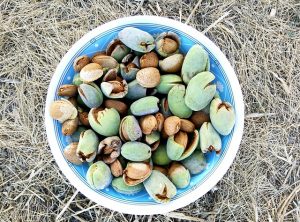 I’ve lived in a small alternative community for the past twenty-seven years.  It’s not that alternative, really just a suburban subdivision near the west edge of Davis, California, called Village Homes. 85 acres of tomato fields were developed in the late 1970s, with the idea of tweaking the usual template of American postwar suburbia to something more like a European village from an older era. Streets were made as dead-ended lanes, walking paths ran between fenceless common areas, and swales were cut into the land to capture water in the rainy season and direct it back down into the ground.  Residents own their own homes, and usually have a small private courtyard space, but otherwise the land is owned communally by all homeowners, and decisions about land use are made by a small volunteer government with town hall voting. Organic gardening space is available to all who want it, and the landscaping is mostly edible in the form of fruit and nut trees.  The community is anchored by a small restaurant, a set of offices for rent, a swimming pool, and, crucially, a pre-school daycare center that rents the community center during weekdays.  Energy use is about forty percent of typical suburban use, and about eight hundred or a thousand people live here, so it is neither very energy-efficient nor very densely populated.  Taken all in all, it’s not paradise or utopia or the housing solution to the world’s ills, but it is nice, and for me it has proved the idea that urban design influences social reality, and that infrastructure helps to determine social and human relations.

Thus Village Homes; and because it’s residential, there is a food angle to it, including that social aspect of food we sometimes call a feast.

The crucial element in our social life, as I said, was the preschool in the community center.  We’ve never met all the people in the village, but we did meet the parents of the kids that our kids were playing with at school.  The pool next to the community center, and the big green flanking it, were obvious places to go after picking up the kids, and as the kids continued to play together, the parents got to know each other. Thus grew some of the closest relationships of our life, those family-by-affinity relationships that I think were common in older forms of village life.  It was easy and felt natural, and it’s lasted beyond the time of the children growing up. And as part of that, we often ate together.

In those years, a gazebo at the south end of the big green served as a meeting place for potluck dinners.  For many years we met there on Thursdays, spring through fall.  In the long evenings people brought out vegetarian dishes, which often included vegetables and fruits grown in our gardens.   The kids ate and played on the big green, the parents ate and talked. The absence of meat in any of the dishes seemed insignificant.  If someone did bring a meat dish, it was signed as such, and eaten like anything else. The variety of dishes was wonderful, and I found the ease with which such quality dining and socializing could be created remarkable.  Having grown up in the atomized standard American suburbia of the 1950s, consisting of nuclear families each tucked into their own mini-castle, I was perpetually amazed that such little adjustments in form could lead to such big improvements in content.

As the topic here is the future of feasts, I think it’s worth mentioning briefly the possibility of vat-grown meats becoming available in the future.  To an extent this is a non-issue, in that the feedstocks for any such futuristic food products are going to still be organic chemicals derived from plant materials, so they aren’t going to be very different from the already-existing plant-based substitutes for meat that we have now.  But they might taste meatier, because they might indeed be meat, literally animal muscle and fat, cultured from sample tissues; which means they won’t have come from the growing and killing of sentient beings.  That would be worth pursuing.  Shifting land away from animal husbandry, especially of cows and sheep, would ease our immense burden on the biosphere and the atmosphere, leaving more room for wild creatures.  It would be better for our carbon balance, and most importantly, hugely better in terms of how we treat our fellow creatures.  So, vat-grown meats, genetically modified?  Yes, please.

In the meantime, the loosely vegetarian orientation of our Village Homes potlucks felt good, for the reasons cited above, both environmental and animal-moral.  The variety of cooking styles at each meal was huge and made the absence of meat barely noticeable—really the meals were a treat for the senses.

I found that the peace and quiet of the evenings, and the sight of so many faces of known friends and acquaintances, all gathered so casually, combined to create a particular pleasure that never went away.  Ease and unpretentiousness were very important to that feeling.  Maybe one aspect of the commons that we don’t know enough about to miss, having lived our lives without a commons, is that lack of structure and leadership.  This was brought home to me by the way we used to harvest the village’s almond trees, which grew in a three-tree strip along the street bordering our village. On harvest day a mechanical shaker like a small tractor was hired to visit, and as its operator drove from tree to tree, we moved big canvas sheets ahead of him, spreading them under the trees. Then he would clamp their trunks with his device’s clawed arm, and it would shake down the almonds in a brief violent shivering, and when the almonds were all down we would pull the sheets over to the street and dump the almonds into the gutter, where they could be easily swept into big burlap bags and later transferred to a long carport roof for drying in the sun.  All this was done with no leadership, and even no organization; people just did what they wanted to.   That self-organizing got the job done as efficiently, or maybe more efficiently, than if someone had been directing us.  This felt wonderful.  It felt ancient.  It was harvesting, or gleaning, and it was palpable in our brains and bodies that we had had evolved to do such things.  We were social primates doing a social primate thing.  The experience made me feel sure that vast parts of our brain still lie in wait, ready for moments like that one.

The potluck meals felt like that too. They were not feasts in the sense the word usually evokes; they were social, like feasts are, but they did not involve an excess of food.  Quite often there wasn’t even enough food, and over time we had to adjust and bring a little more to make sure everyone got fed.  But “enough is a good as a feast.”   This is an ancient English saying, it appears in the first few pages of Barlett’s Quotations, authored by the great anonymous.  It’s worth pondering that phrase for a long time.  Hungry people invented that phrase.  It’s not a capitalist sentiment, in fact it reverses capitalist logic, but it could become part of a post-capitalist structure of feeling.  The brain and body feel it well.  One could even add to it, now, the medical news that not only is enough as good as a feast, it’s better than a feast—as a feast is too much, by definition, and will make you sick, especially if you feast every day, as capitalism urges you to do.  So as a working axiom for going forward, and finding a way to get in proper synch with our biosphere, even with all the eight billion people alive, and all the wild creatures too, it seems to me a crucial thing to keep in mind.  Enough is as good as a feast—or better.  And that’s a good thing.

Now that the kids have grown up and moved away, our potluck in the village has stopped happening.  Other potlucks in the village still fill the two greens on different nights; these may be focused on kids, or on particular common areas, or friendship groups within the village.  I always like seeing them.  For us, the potlucks served their purpose in their time.  Maybe we’ll revive them some day, those of us who still live here. Whether or not we do, it was a beautiful act of social creation—a result of living with a commons, rearing the kids together, and thinking socially and creatively.  Food mattered and was a great pleasure, but it was only one part of a larger way of life.  We were lucky.

Kim Stanley Robinson is a New York Times bestseller and winner of the Hugo, Nebula, and Locus awards. He is the author of more than twenty books, including the bestselling Mars trilogy and the critically acclaimed Forty Signs of Rain, The Years of Rice and Salt and 2312. In 2008, he was named a “Hero of the Environment” by Time magazine, and he works with the Sierra Nevada Research Institute. He lives in Davis, California.