As a composer, I’m interested in finding ways to represent the world through my music. Humans have done this since the beginning of time, from imitating birdsong with a bone flute to the influence of industrial noises in Kraftwerk’s music. Every era has adapted music to incorporate developments in the environment.

In that tradition, what is the current reflection of the contemporary world in music? I believe that one of the most promising ways of representing our increasingly complex world is the use of sonification in composition.

Sonification is the method of transmitting information through non-speech audio. It allows us to listen to data without the use of words. It could be considered the aural equivalent of a graph, which is effectively the visualisation of data. If you imagine a temperature graph, we just assign a pitch to each temperature. The higher the temperature, the higher the pitch. This process can be applied to as other parameter in the data and any other musical parameter, such as rhythm, harmony, tempo, spatialisation, etc.

My PhD project looks at the use of the sonification method as a compositional tool. Mostly, sonification is used by scientists to understand their data. However, what if we used the data to create music? I believe that some data can produce musical structures or patterns; it is my job as the composer to find the right data and assign the right sound parameters.

In fact, many sonifications are hardly pleasing to listen to, which undermines the usefulness of sonification as the listener is uncomfortable. Consequently, my work as a composer can also contribute to science as I apply my aesthetic judgement to improve a scientific method.

When I began my PhD, I was offered to work with stunning dark matter visualisations produced at the Kavli Institue for Particle Physics and Cosmology at Stanford University. The idea was not only to create a soundtrack for these silent movies, but one which would have a direct correlation to the data seen by the audience. Through sonification, I could create music from the data in a process that was analogous to the process of visualisation.

Dark matter cannot be seen as it does not absorb or emit any radiation. In fact, we can only see its effects on matter that we can see. So, the scientists that created these visualisations also had to make visual choices that they attributed to the data from simulations, as they do not know what dark matter really looks like. 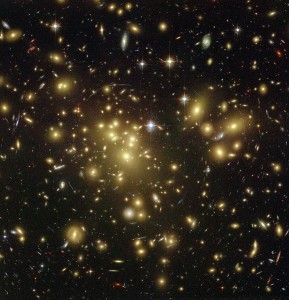 I was also keen to avoid falling into clichés of sci-fi movie soundtracks which have fundamentally shaped what we think space sounds like. In fact, there is no sound in space! So, writing music to visualisations of dark matter is listening and looking at a thing that cannot be seen or heard.

The datasets from the dark matter simulations are incredibly large. Therefore, my first job was to wrestle with large data files and filter them to a size that I could use. I also had to look for interesting patterns and information in the data. Therein lies one of the difficulties of composing sonifications: a composer does not necessarily have the scientific knowledge to deal with the data they are trying to listen to.

It was therefore crucial to work with Ralf Kaelher at the Kavli Institute who guided me through the data; I also spent considerable time learning about dark matter and the astronomy. I must have read every dark matter related Wikipedia page twice at least! Once this difficult stage of learning was completed I could finally apply my craft as a composer to the data. I had to decide which sounds would best describe the data and sound appealing.

I presented my research at the Peninsula Arts Contemporary Music Festival at Plymouth University on 26-28 February 2016. I was lucky enough to have the Immersive Vision Theatre dome at my disposition, which was originally a small planetarium. It completely engulfs the audience as the screen fills your whole field of vision and 10 speakers provide a surround sound. I showed a movie which included different versions of my sonifications which built up to the final version of a complete soundtrack for three visualisations.

This gave the audience the chance to familiarise themselves with the idea of sonification and also trace my creative process. In the end, the music does have a taste of sci-fi music while also retaining my personal style. Some audience members described the sound world as ‘weird’, ‘Dr Who like’ and ‘spacey’. The installation received a very pleasing amount of attention from the media and general public, notably through articles in the Guardian and the Independent.

I am hoping that the use of sonification in composition can also be a way of engaging audiences in contemporary music, especially those who come out of scientific interest. Conversely, it could draw audiences to science as they listen to music.

For now, the sonification of dark matter project will go back to the Kavli Institute for the creators of the visualisations to see. Going forward, I am planning a couple of projects related to the sonification of marine buoys and internet data. I am always excited about the collaborations and discussions that might ensue from them. But most importantly, I love the chance to present my music to audiences after putting the hard work in. 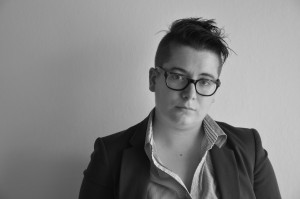 Núria Bonet is a composer currently studying for a PhD in the Interdisciplinary Centre for Computer Music (ICCMR) at Plymouth University. She is interested in the creative possibilities between music and science. She also composes instrumental music which has been played by Lucilin Ensemble (Luxembourg) and Psappha (Manchester, UK) amongst others. Outside of her PhD she researches the history of Catalan folk instruments. Núria is the Student Representative for the Royal Musical Association.