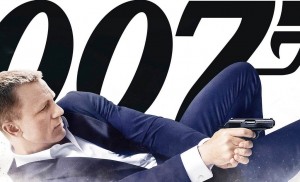 The enduring appeal of the James Bond franchise and the rise to prominence of other spy thrillers will be explored during a conference at Plymouth University which runs from 17-19 June.

‘Spies on British Screens’ will see academics debate the impact of spy dramas from the 1960s to the present day on British culture, as well as how they have enhanced public understanding of the surveillance culture.

It will also explore how the genre has influenced our knowledge of wartime propaganda, from the First World War through to the Cold War, and how it can continue to play such a role in an era where the security services are tackling unknown enemies.

Dr Nick Barnett, a Lecturer in 20th Century History at Plymouth University, is one of the conference coordinators and will address delegates about recent Cold War dramas including The Game and Deutschland ’83:

“The world of spying and surveillance has become a fixture of both film and television, and its appeal seems to be growing. The dramatization of spy stories has always carried a sense of danger and excitement, and while people know it is fiction they want to believe the truth of it. With films such as Spectre depicting a modern interpretation of intelligence, and dramas such as The Game offering Cold War nostalgia, it is clear the spy remains a popular figure on both the big and small screen.”

The conference is being jointly overseen by Dr Barnett, Dr Kim Edwards from Liverpool John Moores University and Dr Laura Crossley from the University of Liverpool.

It will feature discussions about the origins and evolution of the genre, with a major focus on the Bond phenomenon including talks about contemporary masculinity, Bond girls, motion and emotion and ‘Bondmania’.

Academics will also discuss other popular spy films and series including The Deadly Affair, Tinker Tailor Soldier Spy, The Avengers, UNCLE, Homeland and Modesty Blaise. They will also focus on the works of celebrated spy writers including John Le Carré.

Please visit the Plymouth University estore to book your place.