Please join us for the next PEP Talk, the seminar series of the Performance.Experience.Presence research group at Plymouth University. All welcome.

in Roland Levinsky Building room 303 at the University of Plymouth

The Christian King and his English Mercuries: The Juxtaposition of Catholicism and Roman Mythology in Shakespeare’s King Henry V 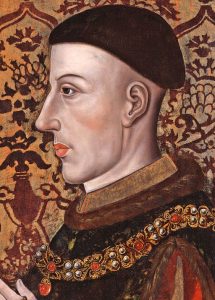 In King Henry V, Shakespeare presents numerous juxtapositions of Christianity and Roman mythology, while providing suggested subtle support to recusant Catholics in Elizabethan England. [In distinction to other scholars, when I refer to “Catholicism” in regards to King Henry V, I am discussing the institution of the English church at the time of Henry V. This is important to distinguish when noting the Protestant Reformation in England during the 16th century.]

At a time when Catholicism was banned and those practicing were penalized, Shakespeare delicately intertwined allusions to the faith that possibly encouraged recusants while doing so in a manner that would not have been dangerous to himself or his players. This thesis is supported by Henry’s Christian piety in a textual analysis of dialogue and action, and references to Roman mythology within the text, arguing that these references elusively presented Henry’s Catholicism as respectable without irritating Shakespeare’s Protestant audience.

This use of Roman mythology in juxtaposition to Catholicism buttresses Elizabethan believers in the Catholic Church. While this paper makes no attempt to explore Shakespeare’s personal religious beliefs, this critical lens analyzes Shakespeare’s possible supportive undertone for recusant Catholics.

Dr Alex Cahill is a lecturer of Theatre and Performance, and Acting at Plymouth University. After receiving her Master of Letters in Ancient Drama from the University of Glasgow, she began researching the Catholic Stage Guild of Ireland for her doctoral thesis. She obtained her PhD in Theatre from the University of Missouri and was awarded a postdoctoral fellowship to complete her research on the topic. Her first book, No Crown without the Cross: the Creation, Existence and Deconstruction of the Catholic Stage Guild of Ireland, will be published later this year.