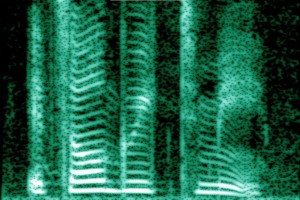 Vōv is a composition for four singers accompanied by computer-generated voices and percussion, which received its premiere at the 2017 edition of Peninsula Arts Contemporary Music Festival, at Plymouth University. Vōv also is the name of an artificial language that was invented specially for this composition. (Please click on the links given throughout the text to watch video recordings of the concert.)

This extraordinary musical composition stems from Miranda’s research into the origins of language and music, using synthetic voice and models of Darwinian evolution, and Peterson’s fascination with creating would-be languages.

Vōv could be a language from an imaginary world, or from a parallel universe. But make no mistake: the lyrics are not just isolated made up words. It is not Dadaist poetry either. Vōv is a fully-fledged artificial language in its own right, in the same way that Esperanto is.

In Vōv, the word vōv means love, and the names of the movements translate as Dawn, Dusk and Dark, respectively. But why is Vōv a significant piece of music? What are the motivations and research behind it?

Ever since the dawn of humanity, voice has always been our primary source for communication. Music and the languages we have today are the products of thousands of years of evolution. Our ability to evolve sophisticated verbal languages distinguishes us from other species but voice also transmits other kinds of emotional and social information in ways that written words are not able to transmit. And of course, let us not forget the undeniable expressive power of the singing voice.

Paradoxically, voice seems to be losing ground to other means of communication. One might say that new communication technologies are to blame. For instance, back to the invention of silent cinema people realized that pictures could speak a thousand words. Indeed, this trend became entrenched in our society today: notwithstanding the fact that we can record voice with our mobile phones, people generally prefer to take photographs instead. Movies now combine audio and vision, but voice is often regarded as the poor cousin of image. More disturbingly, recent studies on usage of mobile phones have shown that texting has taken over making voice calls in the USA and in most of Western Europe.

What is happening? Is voice becoming obsolete? Is technology really to blame here? Or would it be the case that voice, as we used to know it, is going through an upgrading process to be able to express matters of the present times? Vōv engages with these questions by exploring new means, forms and usages of voice in communication and musical creativity.

From a musical point of view, Vōv takes the listeners into uncharted territory. In most explorations into creating new music for voice, musical invention is articulated around an existing well-established language, such as English, German, Italian and so on. However, in Vōv the language of the sung text is created in vitro, which adds another dimension to the creative process: a dimension that has not been explored in musical composition before.

From a linguistic perspective, Vōv is a meditation on meaning and the nature of translation. Meaning itself builds over time, and builds on not just the language that came before it, but also the cultural traditions of the ones who came up with the meanings in the first place. Much is lost, but much more is retained. It is astonishing to look at a modern meme and to reflect on how much one has to know in order to understand its meaning. We know much more than we recognize, and we draw from all of it daily.

Every single word or phrase we use leaves a trail behind it that stretches back into antiquity. Learning their origin is often as perplexing as it is fascinating. For example, the meaning of a word like English “brother” is surprisingly stable both throughout history and in languages such as German, Danish, Welsh and Czech where its cognate survives. The word “bread” on the other hand, goes back to a word meaning something like “to brew” or “to boil”, with our old word for “bread” becoming the new word “loaf”, which itself is cognate with words in other languages, like Russian’s хлеб (khlyeb), which still means “bread”. Still other words have stranger stories. The North American English word “pants”, a shortening of “pantaloons”, which was coined in honor of Pantaloon, a Venetian character in a number of 17th century Italian comedies that wore tight-fitting trousers.

Though we rarely think about word origins in our daily lives, the histories of our words and the cultural traditions they came from remain with us at all times. And music, at least in the context of Western classical music, is very much entrenched in cultural traditions as well. Like languages, musical practices also evolve, leaving a trail of musical memes that are evoked by generations of composers again and again.  But as staggering as it is to consider how much one has to know to understand a modern political joke, for example, it is heartbreaking to consider what it would mean to lose the language in which it was uttered, and to realize that this has happened countless times throughout history.

Divided into three movements, the composition tracks the history of the new language Vōv and the evolution of the meaning of love, as expressed in Vōv.

The poem of the first movement Lāsēh (or Dawn) is somewhat embryonic and its English translation should be fairly comprehensible. (The lyrics and respective  English translations are given with the descriptions of each respective movie available on-line.) Here the concept of love is associated with notions of sexual passion, creation and strength: “With many bodies, we will not feel cold”, “With many children, we will not hunger”, and so on. The music begins as if one is listening to voices and sounds from inside the womb. It follows with whispers, alluding to the Ancient Egypt’s myth of creation by breath, or ‘breath of life’. Rhythmic computer-generated primordial-like utterances and vocal effects represent the birth of the language Vōv.

The singers accompany with transiting vowels, as if they were exploring possible combinations of sounds to create new words. The first Vōv words emerge by the middle of the movement, and the music proceeds towards a cappella singing of Peterson’s poem, which ends the movement.

The second movement, Rezire (or Dusk) pushes Vōv into the present – several thousand years after Lāsēh – and here the footing is less sure than in the previous movement. Strophes in phonetic notation precede the saying that “The world is tearing itself apart”. What follows is less comprehensible: the poem refers to individuals and works of art certain to be known to people from the world from which the text originated, but without the context, the references are meaningless to us. It is one thing to know that the geych is a Ts’und word describing a mythical beast, but the image itself is from a work by Wædal Powd. In order to make sense of it one needs to know the work, the writer, and indeed the word. Vocalizations in the operatic recitative manner and a virtual choir singing surreal utterances allude to such strange world. All the same, in Rezire the concept of love is associated with notions of togetherness and the avoidance of loneliness: “And how can I find another, …, Another to love, If I can’t walk outside, And find you”. In contrast to the contrapuntal nature of the phonetic strophes at the beginning of Rezire, togetherness is represented musically towards the end of the movement, with voices singing the poem together, albeit not in unison.

With the third movement, Rai (or Dark), we see a return to a more familiar discourse, even though some meaning is lost to mysterious technological jargon: “Because of our Ro-processors”, “No KaRa-2 can replicate”, and so on. The futuristic nature of Rai is introduced by means of a section that is entirely electroacoustic, followed by surreal vocal utterances reminiscent of Rezire: vocal memes from Rezire and variations thereof are deployed here. In Rai, the concept of love is associated with notions of survival, guilt, sense of loss and resentment towards trans-humans – beings that resemble humans in most respects, but allegedly are superior: “No KaRa-2 can replicate Love”, “We will rip out our 74Xs”, “Flesh, not metal”, etc. Human voices singing in harmony with computer-generated voices, but singing with different accent and pronunciations of the same lyrics, represents the concept of love here. The piece ends with the vocal quartet singing a cappella.

A significant part of Vōv was composed at Harvard University Studio for Electroacoustic Composition (HUSEAC) during Miranda’s residency at Harvard’s Department of Music in 2016. The authors thank Plymouth University’s ICCMR PhD student Jared Drayton for developing the software that generated the synthetic vocal utterances deployed in various sections of the piece.

Eduardo R. Miranda is a classically trained composer and an Artificial Intelligence scientist. He is Professor in Computer Music at Plymouth University, where he leads the Interdisciplinary Centre for Computer Music Research.

David J. Peterson is the one of the world’s most famous language creators based in California, USA. He has created languages for various films and TV programmes, such as the Walt Disney film ‘Thor: The Dark World’ and the language Dothraki, for HBO’s fantasy series ‘Game of Thrones’.