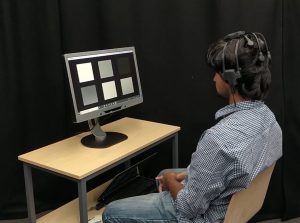 Brain-Computer Music Interfaces is an Interdisciplinary Centre for Computer Music Research (ICCMR) project, which explores the development of brain-computer interfaces (BCIs) for musical applications. Conventionally, in order to operate musical systems and instruments, we require muscular power in some form or the other. BCIs aim to establish an interface that is independent of muscle control. Therefore, they are beneficial for patients who are suffering from locked-in syndrome, which is the loss of all or most motor abilities. Locked-in syndrome is caused due to diseases like stroke, spinal cord injury, or amyotrophic lateral sclerosis (ALS). Brain-computer music interfaces (BCMIs) provide pathways for such individuals to experience the realm of musical performance and composition. It also opens up novel paradigms for performers to control musical systems and instruments.

Over the years, rigorous research has been conducted towards optimising BCIs. However, these systems seldom surpass the boundaries imposed by laboratories due to expensive sensors, bulky equipment, requirement of wiring, and interferences from the environment. In this project, a stand-alone BCI-based musical interface has been presented. It uses a dry and wireless headset to detect electroencephalogram (EEG) signals. The system adopts a stimulation technique called steady state visually evoked potential (SSVEP), which has been widely used in ICCMR by Professor Eduardo Miranda and others. It encapsulates all operations into a single application that is powered by a laptop. When patients with motor disabilities are using these BCIs, it generally requires the presence of specialists and engineers to set up the system. This makes the technology less accessible and more expensive. This project develops methods to allow carers to install these systems on patients. Furthermore, cross-platform development has been examined to deploy BCMIs onto mobile phones and tablets.

Trends in BCI technologies have been subject to continuous change. Scientists have steadily focused on improving communication rates. Earlier, BCMIs, including pioneering ones developed at ICCMR, analysed EEG with the help of spectral density-based analysis. The project that I am working on towards my ResM Computer Music degree adopts statistical signal processing techniques, which have proven to be more efficient than simple spectral analysis. These modifications have improved the robustness and performance of BCMIs. It was tested on 8 individuals and they were able to trigger piano sounds by solely gazing at the interface. The project demonstrates the bright prospects of incorporating neurotechnology into computer music. Interdisciplinary research at the crossroads of these two fields can give rise to a variety of applications that will benefit patients as well as musicians.